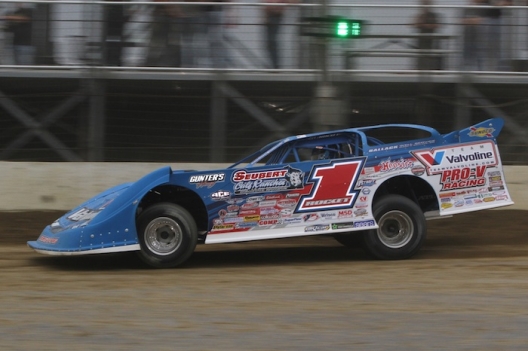 “I’ve run the tour numerous times,” Sheppard said after winning a battle between former tour champions. “It definitely means a lot to me to come out here and get this win. I think I’ve got a win every year in the Summernationals since 2011, so it feels good to keep that streak going, for sure.”

Winning Thursday’s third heat race and redrawing to start on the pole of the main event, Sheppard shot out to an early lead in the 40-lapper. But as the leaders caught the rear of the field at the lap-10 mark, second-running Tyler Erb of New Waverly, Texas, cut down the Rocket Chassis house car driver's lead.

Just as Erb prepared to challenge Sheppard for the lead, Shannon Babb of Moweaqua, Ill., slowed to draw a caution on lap 13. It was Bloomquist who used the restart to his advantage, slipping past Erb to grab second.

Sheppard maintained his lead through the middle stages of the race, as Bloomquist and Erb continued their battle for the runner-up spot. In the waning laps, Bloomquist pulled away from Erb and began reeling in Sheppard. The Hall of Famer's last-ditch attempt to overtake Sheppard with an outside move fell short as Sheppard notched his 12th career Summernationals victory.

“The lapped car was holding me up there a little bit,” Sheppard said. “I couldn’t really get going on the bottom like I needed to to get going down the straightaway. I was kind of waiting on the gas too much. I never seen (Bloomquist) out there and I knew as long as I hit that brown before he did that I could probably beat him to the line. He definitely made it tough on me.

“Tyler Erb set a really good pace there at the beginning of the race and had me up there on top overheating my tires a little bit. Once Scott got to second, I had to move down to the bottom and my left-rear tire, I’m sure it was blazing hot. We had a good car … we’re just really fortunate right now. We’ve got a really consistent race car.”

“We were working the middle and just running right in the slick,” Bloomquist said. “I thought we were going to have him there and then all of a sudden he abruptly turned to the bottom. We had to regroup and change our lane and move up a little and just try to find something. I didn’t see the white. I saw the checkered, but I didn’t realize that was the last lap. But I know it was pretty close.”

It was a solid night for third-running Shirley, who was pleased with his podium finish after a lackluster performance in the June 22 Hell Tour stop at Spoon River Speedway in Banner, Ill.

“It was a good run for us tonight,” Shirley said. “We come out of the box the other day at Spoon River and got this new car out and didn’t perform the way we felt like we should. So we went back home … made sure the car was right. Luckily it paid dividends tonight, putting in a solid finish.”

Notes: Sheppard's previous series victory came June 25, 2016, at Fairbury (Ill.) American Legion Speedway. … Sheppard, who was making his first tour start of 2017, has won a UMP tour event every year since 2011. ... Feature cars took the track at 7:40 p.m. … The race was slowed by two cautions. … The first yellow flag flew on the opening lap when Rusty Schlenk spun on the fronstretch, bringing the race to a complete restart. … A smoking Shannon Babb came to a stop in turn four to draw a caution on lap 13. … Eric Spangler of Lake City, Mich., scratched after hot laps after twisting an axle. … The series made its first-ever visit to Plymouth. … According to records provided by DirtonDirt.com’s Todd Turner, the last time Hall of Famers Scott Bloomquist and Billy Moyer entered a Hell Tour event together was July 16, 2003, at the Steele County Fairgrounds in Owatonna, Minn. Bloomquist was the winner of the event, while Moyer was crowned the series champion that night.

Working around the high side, second-starting Billy Moyer Jr. led the opening lap, with polesitter Brandon Sheppard pulling ahead one circuit later. Sheppard maintained his lead at the halfway point, with Brian Shirley challenging Moyer Jr. for second as Shannon Babb attempted to work his way past Paul Stubber for fourth. Sheppard won the heat race, with Shirley outdueling Moyer Jr. in the final laps to finish second.

Polesitter Scott Bloomquist shot to to an early lead, with third-starting Bobby Pierce overtaking Kyle Bronson for the second spot on lap two. Pierce began closing in on Bloomquist at the halfway mark, but his attempts would not be enough, with Bloomquist picking up the heat race win. Pierce finished second, with Bronson edging ahead of Chase Junghans to run third.

Brent Larson led the opening lap, with Moyer improving from the fourth starting spot to take the point on the second circuit. Moyer began distancing himself from the field at the halfway mark, with Tyler Erb battling Larson of the second-place spot. Moyer won the fourth heat, with Erb finishing runner-up. Larson ran third, with Bob Gardner and Gordy Gundaker rounding out the top five.

With rain expected to be in the area around 9 p.m., UMP Director Sam Driggers informed drivers that Thursday's show would be moving along quickly. ... Plymouth is one of five Indiana racetracks on the 2017 Summernationals slate. … Entering Thursday’s event, five different drivers have already scored multiple Hell Tour victories this season. Billy Moyer Jr. of Batesville, Ark., became the latest on Tuesday, picking up his second series win of the year at Charleston (Ill.) Speedway. … Former Summernationals champion Scott Bloomquist of Mooresburg, Tenn., is among Thursday’s Plymouth entrants. Bloomquist’s most recent Hell Tour victory came on July 9, 2013 at Florence Speedway in Union, Ky. … Brandon Sheppard of New Berlin, Ill., and Tyler Erb of New Waverly, Texas, are among World of Outlaws Craftsman Late Model Series drivers joining Summernationals competitors at Plymouth before heading to Friday’s co-sanctioned event at Terre Haute (Ind.) Action Track. Sheppard’s most recent Hell Tour victory came last year at Fairbury (Ill.) American Legion Speedway, while Erb was the winner of this past Sunday’s event at Tri-State Speedway in Haubstadt, Ind. … Zeke McKenize of Claypool, Ind., is pulling double duty, running in both the Late Model and modified divisions.

After a day idle, the UMP DIRTcar Summernationals returns to action on Thursday at Plymouth Speedway. The 13th round of the 2017 Hell Tour pays $5,000-to-win.

With last year’s event rained out, the Summernationals tour makes its first-ever visit to the Indiana oval. Joining Hell Tour competitors at Plymouth is three-time series champion Scott Bloomquist of Mooresburg, Tenn., who will run with the tour on Thursday before traveling to Ohio for the Lucas Oil Series weekend tripleheader.

Thursday’s program will include time trials, three 10-lap heat races and the 40-lap feature. With 22 cars on hand, there will be no consolation. UMP modifieds will also be in action.