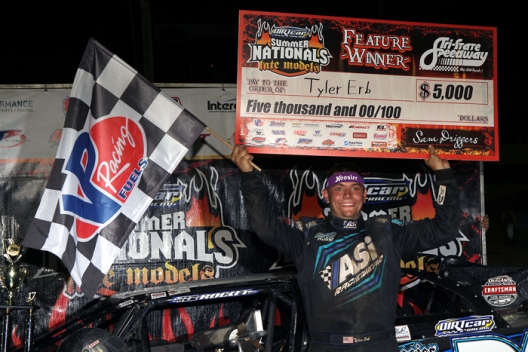 HAUBSTADT, Ind. — Tyler Erb of New Waverly, Texas, completed a perfect night with a 40-lap flag-to-flag victory in the UMP DIRTcar Summernationals feature at Tri-State Speedway. From the pole, Erb led every circuit to top Shannon Babb of Moweaqua, Ill., and Bobby Pierce of Oakwood, Ill. He earned $5,000 for his first-ever Summernationals win in his Tri-State debut.

Becoming the first Texan to win on the long-running Midwestern tour, Erb set the fast time, won his heat race and rolled to his first Hell Tour victory.

“It’s huge. I’m a huge fan of the sport. This is probably the next best thing to winning a Lucas or an Outlaws race, and hopefully we can get one of those done,” Erb said. “Man, it’s awesome, I have a Shannon Babb T-shirt in my closet. It’s pretty cool. I’ve watched all these guys and I’ve raced with them and definitely gotten a lot better behind the wheel and it’s paying off.”

While half of Sunday’s field for the 10th stop on the annual Hell Tour’s visit to the quarter-mile Haubstadt oval made a four-hour overnight trek from Fairbury, Ill., where the series competed on Saturday night, Erb and his team traveled more than twice as far. A World of Outlaws regular who had been competing at Lernerville Speedway in Sarver, Pa., on Friday and Saturday, Erb made a nearly nine-hour overnight haul to enter his first-ever Summernationals race.

“It’s been a long 24 hours, but it was definitely worth it,” Erb said. “I’ve been racing all them Outlaw races and stuff and I feel like I should’ve already won one of them by now. This is definitely just as good competition with guys like Bobby and Babb and Moyer and all them guys. I don’t know … this is probably my biggest win. Not money-wise, you know what I mean, but it means the most so far.

“I finally got everything to go my way. I hit the redraw right and won my heat and it all paid off.”

Erb pulled the field into turn one at the start with Babb, Pierce and Moyer in tow. As he ran up to the cushion, Babb diamonded the corner, turning left under Erb to grab the lead heading down the backstretch. Babb’s slider into turn three carried him well up the track however, allowing Erb to cut back under him and retake the lead as they completed the first lap. He never gave up the top spot, pacing the field for the remaining 39 laps to earn his victory.

“I was kinda hoping that (Babb) couldn’t get a good run. He couldn’t beat me into (turn) one was the main thing,” Erb said, “because if he could get the momentum, he probably might of had a really good shot at this race. When he drove in there hard, I just stuck to the top and was able to turn down and get back by him. Jacob was telling me as long as I wasn’t hittin’ the wall and climbing it, like when I got tight those couple of times, I was maintaining a decent lead. It all worked out, man, that’s all I can say.”

Babb followed in Erb’s tire tracks up around the wall, while Pierce took a more unfamiliar approach — at least for him — down around the hub.

“We’ve run a lot of races here and I don’t think he’s got a lot of experience at this place, but he was in the right position,” said Babb. “I knew on that start I tried to get him and they’d reworked the track and watered it and it was slimy. I shoved and he was able to get back by me. It was definitely top dominant.”

As Erb powered around the top, it didn’t take Babb long to realize he would need some help in the form of either lapped traffic or a bobble by the leader if he was going to win his second straight Summernationals feature.

“The middle came in there for a little bit and I seen Bobby down there in (turns) three and four and I thought if we got to traffic I might (have a chance),” said Babb. “My car was pretty good down there, but I was only gonna be able to do it in traffic, a high side slingshot down the straightaways, carrying a lot of momentum.

“I was hoping he might get in too deep and shove and might open the door for me, but when you roll in the middle, you just don’t have any exit here. What we was hoping for was for him to maybe make the wrong move or whatever, but he did a good job and kept her up front. Congrats to him.”

Like Babb, the fifth-starting Pierce was hoping to be able make a move in lapped traffic. He wanted to see the race stay green in the second half, but a lap 28 caution derailed his plans.

“Me and Babb and him were finally having a good race there when we had that long green-flag run,” said Pierce. “I was really catching him in lapped traffic. I don’t know what it was. I think his tires were going away on the long green run. Then on those cautions they’d come back in and really take off.

“Tyler would really take off and in like 10 laps me and Babb would kinda catch him back, but he was driving the cushion like it was a huge race to win, like $100,000,” Pierce added. “But you know, he snuck in here and got him one. I’m proud of him for that. He drove a heck of a race.”

At 9:25 p.m. drivers hit the track with a four-wide parade lap. ... Speedway officials did a little prep work on the track at 8:55 p.m. before the main event. … During the redraw, Tyler Erb earned the pole, while Shannon Babb will start alongside on the front row. Fellow heat race winner Billy Moyer will roll off in third. … Bobby Pierce, who leads Moyer by just 14 points in the series title chase, starts directly behind his closest pursuer in fifth. … Both Moyer and Babb are chasing history as they eye 100 career Summernationals victories. Moyer, who has three this season, tops the list with 96, while Babb, who has a pair of Hell Tour wins this year, has 92 career Summernationals wins.

Third-starting Kent Robinson dove from the outside row to the bottom to put himself in contention on the first lap and then pulled away to win the consolation race. Jeremy Sneed and Jose Parga claimed the final two transfer spots. Tanner English was slated to start on the pole, but scratched, moving Jordan Bauer up to the front row.

Billy Moyer of Batesville, Ark., grabbed the lead on the opening lap from polesitter Rob Mayea, and cruised to a convincing win in the third heat race. Moyer crossed the stripe 4.353 seconds ahead of Bob Gardner, who pulled away from Mayea midway through the race. Mayea fell back, slipping to fourth at the finish behind Brent Larson. Australian Paul Stubber raced his way into the A-main with a fifth-place finish.

Thwarting Bobby Pierce’s slider on the first lap with a crossover move to gain the lead heading down the backstraight, Shannon Babb of Moweaqua, Ill., led the distance to pick up a win in the second heat. Babb won by 1.516 seconds over Pierce. Chase Junghans was a distant third, with Dennis Erb Jr. fourth and Caleb Ashby finishing fifth to gain entry into the A-main. The caution flew on lap three for Chad Stapleton and Brent McKinnon.

Tyler Erb led all 10 laps to win the first heat. Erb built a lead of 1.675 seconds before the race was slowed by its lone caution as Blake Spencer spun in turn two on lap nine, setting up a one-lap shootout. Erb kept Steve Casebolt at bay to win the heat, while Casebolt settled for the runner-up spot ahead of Billy Moyer Jr. Moyer Jr. made a high side move out of turn four to grab the third spot midway through the heat. Ryan Unzicker finished fourth and Gordy Gundaker was fifth to take the final transfer spot.

Tri-State has had four different winners in the last six Summernationals events dating back to 2011. Shannon Babb of Moweaqua, Ill., has three of the six wins, while Bobby Pierce, Billy Moyer and Scott Weber have one win apiece. Babb and Pierce will start alongside each other on the front row of the second heat race. … There has not been a back-to-back winner in Tri-State’s UMP DIRTcar Summernationals events since Rodney Melvin won in the 2004-05 seasons. Pierce is the most recent winner. … Pierce of Oakwood, Ill., topped Brandon Sheppard of New Berlin, Ill., last season, winning a scheduled 40-lapper that only went 38 laps due to a rain storm hitting the speedway in the waning laps. … Pierce leads the series with seven top-five finishes in nine events. … Rodney Melvin is at Tri-State in a new-design Rayburn Race Car. Dustin Nobbe of Batesville, Ind., tagged the wall during qualifying, damaging his right front suspension. … Chase Porter and Tanner English also hit the wall during qualifying, but were able to continue. … Tyler Erb of New Waverly, Texas, made the haul from Lernerville Speedway in Sarver, Pa., where he was competing in a World of Outlaws race.

Joining the Hell Tour at Tri-State after his 17th-place finish in Saturday’s Firecracker 100 at Lernerville Speedway in Sarver, Pa., World of Outlaws interloper Tyler Erb of New Waverly, Texas, set the overall fast time on Sunday, touring the Tom Helfrich-promoted oval in 14.126 seconds. Erb will start from the pole of the first heat race. Bobby Pierce of Oakwood, Ill., was the quickest in the second group at 14.194 seconds and will start on the pole the second heat. Rob Mayea of Bend, Ore., earned the pole for the third heat with a fast lap of 14.874.

Tri-State Speedway hosts Sunday's 10th round of the UMP DIRTcar Summernationals with a $5,000-to-win purse on the line at the 3/8-mile oval.

Hot laps, time trials, three heat races and at least one consolation race precede the night’s main event with a starting field of at least 22 Super Late Models. Modifieds are also on the card.