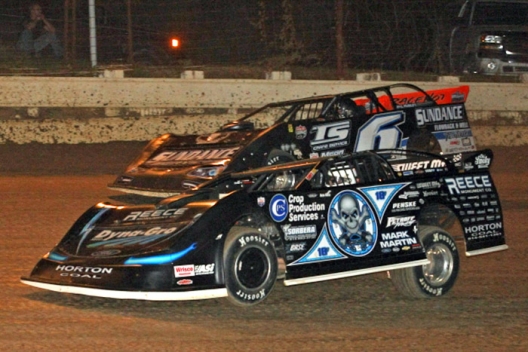 Outdueling 2015 dominator Jonathan Davenport of Blairsville, Ga., in a stirring stretch run, Bloomquist grabbed the lead on the 85th lap and then pulled away from the Lucas Oil Late Model Dirt Series points leader following a lap-96 restart to record his record fifth career victory in the Pittsburgher 100.

Bloomquist, 51, survived Davenport’s relentless late-race bids — including a dramatic 92nd lap, when Davenport pulled close to Bloomquist but slid high and bumped the outside wall in turns three and four — to pocket the race's $20,000 top prize. Davenport crossed the finish line 1.829 seconds behind Bloomquist, whose triumph marked his second straight on the Lucas Oil Series over the 31-year-old superstar.

“He ran a good race,” Bloomquist said of Davenport, who finished second to Bloomquist in the Aug. 22 Whiskey City 50 at Lawrenceburg (Ind.) Speedway. “He’s been tough all year, so to outrun him feels pretty good.”

Reigning Lucas Oil Series champion Don O'Neal of Martinsville, Ind., charged forward from the 17th starting spot to finish third after nearly overtaking Davenport for second on lap 86 and turning back a threat from Jimmy Owens of Newport, Tenn., in the final circuits. Owens settled for a fourth-place finish after leading laps 16-32 and Dennis Erb Jr. of Carpentersville, Ill., completed the top five.

Bloomquist employed his trademark patient approach to finally overcome Davenport, who vaulted past Josh Richards of Shinnston, W.Va., to take the lead on lap 38 but couldn't hold it to the finish. The Dirt Late Model Hall of Famer slipped as far back as fourth from his pole starting spot before securing second place behind Davenport with a lap-40 pass of Owens and then calmly stalking the pacesetter until the time was right to make his move.

“The key, really, was, staying in tow, and watching everyone else,” said Bloomquist, who turned up the pressure on Davenport following a lap-75 restart . “Being able to gauge off the other competitors and move around tremendously on the track was the reason we were eventually able to get by him.”

The deciding moment came on lap 85 when Bloomquist surged his Sweet-Bloomquist machine ahead of Davenport’s K&L Rumley Longhorn mount entering turn three. After Davenport’s attempt moments later to slide back ahead of Bloomquist through turns one and two fell short and cost him ground to the leader, Bloomquist was never headed.

“Once we got around Davenport I knew we were in good shape,” Bloomquist said. “I had a little bit of a push, but I could drive through it.”

Bloomquist wasn’t able to cruise, however. He had to stay hard on the gas all the way to the finish to remain in front of Davenport, who tossed his car around the extreme top of the sprawling half-mile oval to catch Bloomquist on lap 92 but saw his hopes effectively dashed by his slap of the outside wall and a caution flag four circuits later that broke his gathering momentum once more.

After securing his second Pittsburgher 100 triumph in the last three years, Bloomquist finally had a chance to catch his breath. He was amazed by the frenetic pace at a track he said was “probably in my top-five places to race.”

“There’s no doubt, this is a demanding racetrack — just real high-speed, slick. Overdriving a little bit will cost you. You can end up in really bad shape if you get into these corners up high too hard.”

Bloomquist avoided costly mistakes — and as a result, he proved that he’s stepping up to meet the threat to his Dirt Late Model supremacy being provided by Davenport.

“We’re up for the challenge,” said Bloomquist, who won the inaugural Pittsburgher 100 in 1989 and also captured the event in 1992, 1995 and 2013. “That’s what it’s about. You just gotta work hard … and that’s what we’ve been doing. (Davenport’s) got everybody working more, working hard. I still feel we’ve got a little ways to go, but what can I say — we were fast time, won our heat and won the feature. That’s the same thing as last weekend (at Lawrenceburg), so we’re obviously chipping away at it and that’s what we’re gonna continue to do.”

Davenport showed barely a shred of disappointment after flirting with another big-money victory in an epic season already filled with lucrative flourishes. He calmly recounted the circumstances surrounding his loss of the lead on lap 85 and his inability to seize it back.

“I think we were in lapped traffic — I don’t even remember, I was so focused on what I was going — but I guess got loafing a little too much and I didn’t know (Bloomquist) was actually that close,” Davenport said. “It’s so dark here you can’t really see nobody with signals so I was just trying to be kind of smooth right there where we was running. He slid me clean (to take the lead) and I about had him slid back (in turns one and two), but I didn’t think I quite had him clear so I let off and I let him go.

“Then we got our momentum going there and run him back down … but hell, he’s the best there are, so I guess it’s just an honor to run second.”

Davenport noted that he bent his car’s right-rear spoiler when he clipped the outside wall on lap 92 while approaching Bloomquist to make one final push for victory. But while the damage hampered his machine’s downforce for the remainder of the distance, he said the lap 96 caution flag, for Mike Marlar of Winfield, Tenn., slowing with a flat tire after losing fifth place to Erb, was more trouble for him.

“I wasn’t too good on the restarts,” Davenport said. “I feel like our car was definitely a little better on the longer runs, so I really hated to see that last restart.”

Nevertheless, Davenport did make a last-ditch bid when the green flag flew.

“We had a pretty good restart there and I thought he’d stay on the cushion (through turns one and two),” Davenport said, “but then I saw him turn off of it so I had to lift there.”

Davenport accepted his ultimate fate, noting that he simply didn’t have the superior combination on this night.

“We’ve been really good this year, been real fortunate we’ve been getting a lot of wins,” Davenport said. “We just need to step our game up a notch here.”

Richards, who started from the outside pole and led laps 1-15 and 33-37, faded to sixth in the final rundown. Kent Robinson of Bloomington, Ind., quietly moved forward from the 18th starting spot to place seventh; Steve Francis of Ashland, Ky., was eighth after running in the top five early and later slipping outside the top 10; Keith Barbara of South Park, Pa., finished ninth after starting last (25th); and Marlar salvaged a top-10 run after pitting on lap 96.

Five caution flags slowed the race, none for serious incidents. Debris caused the first slowdown on lap 38. Shortly thereafter, on lap 41, Chris Brown of Spring, Texas, slowed in turn four. Gregg Satterlee of Indiana, Pa., slowed on lap 47 after clipping the homestretch wall while running sixth, while Brandon Sheppard of New Berlin, Ill., stopped on the homestretch on lap 75 and Marlar did the same on lap 96.

Notes: Bloomquist registered his fourth win of 2015 and the 58th of his career on the Lucas Oil Series. … Mike Pegher Jr. of Wexford, Pa., saw his weekend behind the wheel of the Bobby Lake Motorsports No. 27 came to an early end after he tangled with Mason Zeigler of Chalk Hill, Pa., during Saturday's hot laps. Pegher bounced off the outside wall and immediately loaded up upon returning to the pits, while Zeigler spun but drove away. ... Zeigler returned to run the second B-Main with the right side of his car patched up and charged forward to pass Tim Shaffer for the third and final transfer spot with two laps remaining. He appeared headed to a top-10 finish in the feature until he ran out of fuel with two laps remaining. … With all Lucas Oil Series regulars making the field, provisional starting spots went to the two fastest drivers from time trials who failed to qualify: Sprint car veteran Tim Shaffer of Aliquippa, Pa., and Steve Baker of Morgantown, W.Va. Barbara also earned a track provisional for winning the recent Red Miley Rumble, pushing his streak of consecutive Pittsburgher 100 feature starts to 10. ... Kyle Lukon won the 25-lap RUSH-sanctioned Crate Late Model feature that kicked off the evening's program.