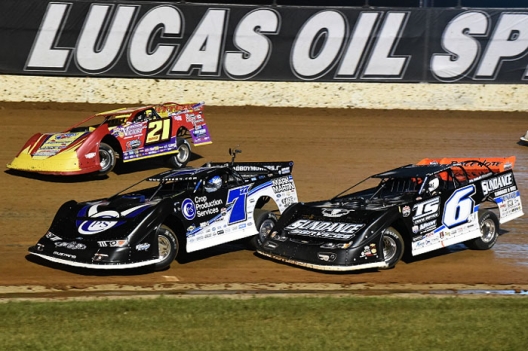 WHEATLAND, Mo. (July 11) — If there was any driver at Lucas Oil Speedway who didn’t need two drivers to fall out in front of him, it’s Lucas Oil Late Model Dirt Series points leader Jonathan Davenport.

But that’s exactly what happened over a three-lap stretch early in Saturday's CMH Diamond Nationals at Lucas Oil Speedway, handing Davenport the lead on the 17th lap. From there, Davenport blew the 28-car field field away, lapping all but nine competitors and winning by a half-track margin at the 3/8-mile oval.

Davenport’s series-leading eighth victory of the season paid $10,000 and clearly established him as the favorite for Sunday’s $30,000-to-win Show-Me 100, the crown jewel event that was postponed by rain on Memorial Day weekend.

“I love coming up here and smiling and getting my picture made,” the Blairsville, Ga., driver said in victory lane. “This is just a remarkable season for us, unbelievable. I’ve gotta thank (car owners) Kevin and Lee Roy (Rumley), Brian, and everybody back at Longhorn Chassis.

“We had a really long week this week. We wrecked a car last week at Portsmouth and we had to build a new one this week. So we left North Carolina at 2 o’clock this morning and drove all the way through all night, and got here just in time for the drivers’ meeting. Now we can sit back and relax a little bit and figure out what we need to do for 100 laps tomorrow.”

Scott Bloomquist of Mooresburg, Tenn. — driving a Jared Landers backup car after his team’s hauler broke down en route to Wheatland — rallied from 17th to second, but by the time he was challenging fellow Tennessean Jimmy Owens for the second spot, they were seven seconds behind the dominating Davenport.

Bloomquist and Owens were followed to the checkers by ninth-starting Brandon Sheppard of New Berlin, Ill., and 22nd-starting Chris Simpson in Oxford, Iowa, in a race slowed by three cautions.

“We spent the whole (night) playing catchup. The car was extremely good, and I want to thank Jared and Lance (Landers) and Mark Martin for letting us run this car,” Bloomquist said. “We lost an air pump in our rig on the way here, and he finally got it fixed I think about 8 o’clock this evening, and he still had 10 hours or 11 hours to go.

“We build Jared’s cars exactly like mine this year, and this is the first time I’ve come and felt like I was going to use another person’s car at the racetrack that I knew was as good as mine.”

Owens ran second most of the way before giving up the spot to Bloomquist in the final laps, but he’d nearly forgotten what Davenport’s car looked like in the second half of the race.

“He’s got it going for him right now,” Owens said of Davenport. “He’s been doing really great. You know, my hat’s off to 'em. They’ve had a great season and he keeps backing it up with wins. … wreck last week and win this week. It’s working out for 'em.

“I had a pretty good hot rod. I might’ve got on it a little early and run a little hard early in the race, and that kind of killed me there toward the end. But, you know, this is a lot better than last time we was here earlier this year, so we’ve got something to work with tomorrow.”

Landers, of Batesville, Ark., led the first 11 laps, but while mixing it up with Billy Moyer and Davenport, Landers lost control on the frontstretch and spun driver’s side first into the turn-one wall. He wasn’t injured.

Moyer led the field back to green but two laps later appeared to lose power on the frontstretch and Davenport briefly nosed underneath him before Moyer rolled to a stop in turn two. Moyer was able to return to restart on the tail, catching a break after another lap-16 caution on the restart when Jesse Stovall got into an infield tire barrier and the resulting scrambling sent Kent Robinson spinning inside turn four.

Davenport was glad he didn’t make any more contact with Moyer than he did.

“I got a big run on him right there. I was actually just letting off — I was going to try to go by him on the outside, and I guess that’s (good) luck that I was going to do that, because I’d already rolled out of the throttle, so I didn’t hit him so hard,” he said. “Luckily it didn’t get into our radiator.”

Bloomquist expects to be back in his own equipment for Sunday’s 100-lapper, where he’ll start outside the eighth row.

“I’m pretty sure Jared’s going to want this car back,” Bloomquist said. “I think he might’ve hurt his a little bit. If I was him I’d just add the 30 pounds to the seat and go for it, because this thing’s ready to race.”