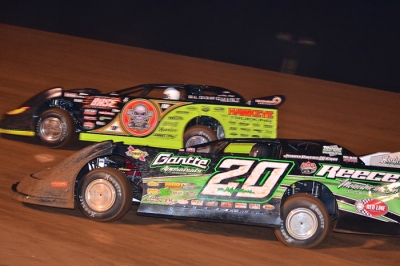 Jimmy Owens (20) moves by Scott Bloomquist on his way to victory. (Eric Gano)

Owens, who earlier this season wrapped up his second consecutive Lucas Oil Late Model Dirt Series championship, not only had to work a little harder at East Alabama, but also needed some good fortune to overcome adversity on his way to claiming his first-ever victory in the 3/8-mile oval’s 38th annual National 100 main event Sunday evening. | Notebook | Slideshow | Prelims

After surviving mechanical issues that forced him into a backup car during Saturday’s preliminary action for the unsanctioned special event, Owens overcame an extremely tight race car early in Sunday’s 100-lap main event, benefitted from a couple of timely cautions and later outdueled Scott Bloomquist, Shane Clanton and Dennis Erb Jr. on his way to claiming a $21,800 payday.

“A lot of things went our way this weekend,” said Owens, who earned the event’s $20,000 winner’s paycheck plus an extra $1,800 in lap leader bonus money. “Even when things didn’t go our way, they did end up going our way. The team kept digging and did their best to give me a good car. I just drove it and tried to pull through for them.”

Owens took the lead from Clanton on lap 64 before pulling away through the second half of the race. A lap-93 caution gave a hard-charging Erb of Carpentersville, Ill., the chance to challenge Owens for the lead, but Owens held him at bay on his way to scoring his 12th overall victory of the season.

Erb settled for second after starting from the ninth position while the second-starting Clanton took third after leading laps two through 63. Bloomquist, the Mooresburg, Tenn., driver who leads the National 100’s all-time wins list, finished fourth after a tense back-and-forth battle for second with Owens for much of the middle portions of the race, and Chris Madden of Gray Court, S.C., advanced from his 23rd starting spot to round out the top five.

Owens had his work cut out for him from the beginning of the weekend. After qualifying just 11th fastest of the race’s 35 entries, Owens’ crew discovered mechanical issues with his primary race car that forced him into his backup car without any hot laps for his heat race.

Starting from the tail of the fourth heat, Owens rallied through the field in the 15-lap prelim to win and earn the fourth starting spot in Saturday’s main event.

Through the first half of Sunday’s feature, Owens didn’t look anything like the race’s dominant car. He struggled with an extremely tight car early in the race and nearly fell outside of the top five when he had to slow to avoid pushing off the topside of the track. Fortunately, a timely caution for a spin back in the pack allowed Owens to keep his spot.

Owens was again saved by a caution on lap 44, this time when he was clearly headed over the banking on the back straightaway before the yellow flag waved.

Owens didn’t squander his second chance. His car’s setup came to him as the track took rubber midway through the race and Owens picked up steam. He chased down and moved by the second-running Bloomquist by lap 55 and later made quick work of Clanton in taking the lead.

“I was a little worried at the beginning, but then again I really wasn’t worried,” Owens said. “The car was way tight, but I knew once the track blowed off we had the right tire as long as we didn’t go too soft. We were able to make it last and had some things go our way and was able to get the win.”

The victory didn’t come without some controversy. On Saturday night, Owens was scheduled to start third in the first of four heat races, but his crew didn’t have his backup car ready in time for Owens to make the race. Race officials allowed him to start from the tail of the night’s final heat race, which undeniably proved to be the most favorable heat race to be in based on competition.

The lap-44 caution was also a questionable call by race officials. Owens would’ve dropped at least five or six positions at best if he saved his car from going all the way over the banking and could have likely ended up at the tail of the field. But officials blamed the caution on the lapped car of Dana Eiland, who was slowing slightly but never came to a complete stop as he appeared to be headed for the pit area.

“People see things different, but that’s part of it. If there wasn’t any controversy, then racing would be boring.” Owens said. “I know when we went off the back straightaway, there was a car sitting down here. I’m pretty sure they called the caution before I even went off. I don’t know, but I’ll take it.”

Looking for his first victory in nearly two months, Erb appeared to be as fast as Owens in the final run to the finish, but he couldn’t find a way around the leader. In settling for second, Erb posted his best National 100 finish in nine starts and his fifth top five in the event since 2006.

“I didn’t know if I had enough, but I was gonna try for it after that last caution,” Erb said. “I rolled up around the top there and got rolling pretty good, but he pulled out there pretty good, too. I was able to stay right there with him, but it would’ve took him making a mistake to get him at the end.

“We had a good run here tonight. Starting back and working our way up through there, we had a good car halfway through and then really got rolling.”

Clanton, a frequent competitor in East Alabama’s major events who was also looking for his first National 100 victory, settled for third after fading away from the top two on the final restart.

“I had my car setup too tight,” Clanton said. “We were tight from the beginning, but the racetrack was there to help me turn. When it started getting slick before it rubbered, we were really too tight. (A crew member) told me Owens was closing so I tried the bottom, but I couldn’t steer. I was just too tight.

“That’s the way it goes. The racetrack changed so much from the beginning to the end. And they pay based on the end of the race, not the beginning.”

Notes: Owens drives a Mike Reece-owned Bloomquist Race Car with a Cornett Racing Engine and sponsorship from Reece Monument, Gantte Appraisals, Red Line Oil, FK Rod End and Sunoco Race Fuels. … The race took more than an hour to complete and was slowed by 11 cautions. … Polesitter Steve Francis of Ashland, Ky., Dale McDowell of Chickamauga, Ga., Ray Cook of Brasstown, N.C., and Randy Weaver of Crossville, Tenn., were all among drivers to fall our of the race while running among the top 10. … The event was marred by tire-cheating issues, including three drivers being disqualified during Saturday’s preliminary action. Fast qualifier Mike Marlar of Winfield, Tenn., and Madden, who qualified third, were disqualified following time trials while Eric Jacobsen of Seacliff Beach, Calif., was found illegal in pre-qualifying tech. Joe Armistead Jr. of Sharpsburg, Ga., was disqualified following a fourth-place finish in Sunday’s consolation race. All four drivers disputed the tests, which were conducted at the track using a sniffer. ... Hometown driver William Thomas scored a pair of $5,000 victories in Crate Late Model and Limited Late Model action earlier in the day.