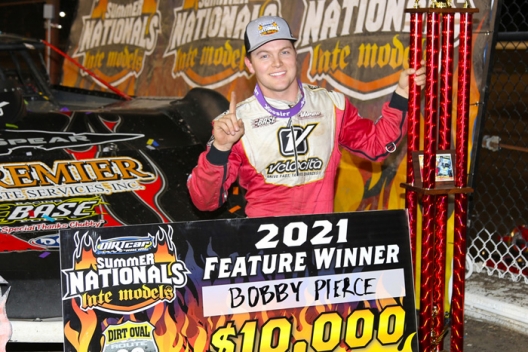 JOLIET, Ill. (July 2) — Bobby Pierce has done a lot in DIRTcar Summer Nationals competition over the past decade, but he had never managed to string together three consecutive victories.

The 24-year-old star from Oakwood, Ill., achieved the milestone Friday night, roaring to his third straight triumph with a dominant flag-to-flag run in the 30-lap feature at Dirt Oval Route 66 Raceway.

“Man, three in a row,” Pierce said after beating Frank Heckenast Jr. of Frankfort, Ill., to the finish line by 1.147 seconds for the $10,000 top prize. “I really wanted it that first week (June 15-16 when he opened the Hell Tour with back-to-back wins) and we got it done tonight.”

Brian Shirley of Chatham, Ill, who is seeking a fourth straight and fifth overall Summer Nationals title, reached third early in the race and stayed there to the finish. Ashton Winger of Hampton, Ga., overtook Brandon Sheppard of New Berlin, Ill., and Tanner English of Benton, Ky., on a lap-26 restart to finish fourth while English was fifth and Sheppard placed sixth in his family-owned No. B5.

Pierce started from the pole position and led every lap, but only after fighting off a stiff challenge from Heckenast on the opening circuit. Heckenast, who started second, surged ahead of Pierce down the backstretch before he lost traction off turn four and Pierce bolted ahead and never looked back.

“To beat Frankie there on the start of that race was key,” Pierce said. “When I got by him there after those first couple laps of battling with him, from there I just had to hang on.

“This is a really big, fast (half-mile) track and you got a lot of time to thin down these straightaways. That’s not what you want as a driver, is too much time to think. We got ‘er done.”

Racing at the specials-only oval promoted by his sister Sherri, the 32-year-old Heckenast saw his best opportunity for victory pass through his fingers on the first lap.

“I did a horrible start, but then I tried to make up for it on the back straightaway,” Heckenast said. “(Pierce) didn’t run me in the wall or anything … I just squeezed the gap and got the right-front spoiler and got in the lead, and then when I went into (turn) four there was just some grease on the top coming out of (the corner) that was hidden underneath the crumbs and I was just a half a car too high and the car just shot to the wall. That’s when I almost got passed — I think it was Dennis (Erb Jr.) — and Bobby got a run on me and it was over.

“I didn’t really expect the race to be over the first lap, but it was. I thought we were gonna be coming down (to run lower on the track) but it just never slowed down up there. They did a really good job on the track, and I don’t think any of us expected it (the fast lane) to be up on the top like that.”

Pierce built an edge of over 4 seconds before the race’s lone caution flag flew on lap 26 when Jeff Roth hit the turn-four wall, leaving his car with significant front and rear bodywork damage. Though the slowdown took Pierce out of heavy lapped traffic and he went on to control the restart, he would have preferred the feature to run non-stop to its conclusion.

“I definitely didn’t want to see that caution,” said Pierce, who won for the fifth time in 10 Summer Nationals events to extend his points lead. “Even that very last lap deal (when Mike Spatola slowed rounding turns three and four but no caution flag was displayed), I didn’t know what they were gonna do with it. Fortunately I didn’t have to make another lap there. It’s cost me before.”

Notes: Pierce, who registered his 32nd career Summer Nationals triumph, won’t chase a fourth consecutive win in Saturday’s tour stop at Fayette County Speedway in Brownstown, Ill. He will skip the event to attend his sister’s wedding. “I really wish I was able to make it tomorrow,” he said, “but I’m also glad I’m able to make my sister’s wedding.” … The victory was Pierce's first worth $10,000 on this year's Summer Nationals. His previous four wins paid $5,000. ... Pierce’s single-season career-high win total on the Summer Nationals is 11, in 2016 en route to the second of his three straight series titles. … Dennis Erb Jr. and Tanner English ran side-by-side almost the entire first heat before Erb slipped ahead late for the victory. ... Joliet hosted the series for the second time; the first visit came in 2018 when Shannon Babb was triumphant.

In one of the best heat races so far on the series, Dennis Erb Jr. edged ahead of Tanner English on the last lap after they ran virtually side-by-side for eight laps. ... "I need to be down there (in the low groove), but he was there," said English, who is making his Joliet debut. "I didn't want to cut him off." ... Neither has English's father, Terry, competed at Joliet. ... Ohio driver Jon Henry is piloting Matt Carmody's No. 57 Dargie-powered Rocket in what he calls a "one-off" deal. The 35-year-old Henry has spent much of the Covid era traveling in Australia, New Zealand, Europe and throughout the United States, including spending the last five months in Sunnyvale, Calif. He's never competed at the Joliet oval, but in 2005 he served as the flagger for demo derbies for his friend Sherri Heckenast. ... The spectator race was somewhat confusing in that it didn't include the passenger cars of spectators nor did it seem to be race. About 20 bomber-style cars made some "laps" around infield tires and stirred up so much dust fans couldn't tell what exactly was going on. Several of the cars bailed out, apparently because of the lack of visibility ... After the spectator race was a 30-minute intermission before the seven-car modified feature.

(8 laps; all transfer and start straightup in feature; winners redraw)