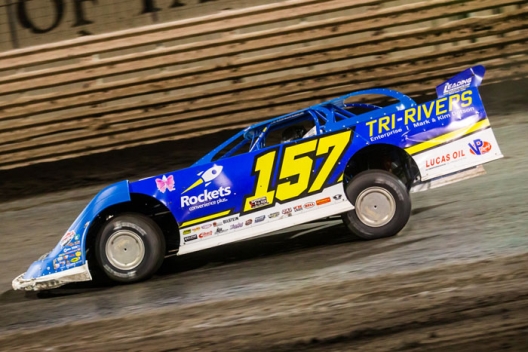 The 43-year-old Winfield, Tenn., driver had his hands full with Tim McCreadie for the final 60 laps, regaining the lead from the eventual runner-up on lap 91 after McCreadie inched ahead to lead lap 90 as Marlar grabbed his race-record $50,000 winner's purse at the half-mile sprint car stronghold.

"He had me on pins and needles at the end of that thing," Marlar said.

In adding his 2021 victory to victories in 2016 and '17, Marlar took the checkers a half-second ahead of McCreadie, the Lucas Oil Late Model Dirt Series points leader who collected $25,000 for his second-place finish.

Ricky Weiss of Headingley, Manitoba, was third followed by Earl Pearson Jr. of Jacksonville, Fla., and Brandon Sheppard of New Berlin, Ill., in the 100-lapper that returned from a one-year hiatus because of 2020 pandemic restrictions.

Tyler Erb of New Waverly, Texas, who dominated Thursday and Friday prelims with a pair of 25-lap victories worth $7,000 apiece, led laps 11-39 but stripped his rear-end gears and was forced pitside for repairs. He rallied back as high as fifth and settled for a sixth-place finish in falling short of a three-race sweep.

McCreadie led 10 laps at the outset before Erb took command, but the lap-40 caution for the slowing Erb — which officials turned into a red flag for a planned fuel stop — put McCreadie back out front. On the restart, Marlar got rolling on the high side and swept into the lead exiting turn four.

"Man, the car was really good and once I got out in clean air, it was really, really good," Marlar said. "My guys helped me get it tuned in really good this weekend. You've just gotta have a good car in this stuff and you can get up through there. It was an awesome race."

The lower-running McCreadie hung with high-flying Marlar the rest of the way, pulling alongside a few times and then going ahead on lap 90 when Marlar slipped up in turn two. But Marlar was able to regain his rhythm and go back out front a lap later.

"Once you lose that air here, you're in trouble," Marlar said of the late-race battle. "We had some cars in front of us just congesting things. You know, Timmy, he's a professional's professional. He raced me clean as he possible could without wrecking us both. We were all over each other down there but we made through it OK. I appreciate him racing me clean. He's so good. This is like that New York stuff, running on them hubs, big-block modifieds, hitting the Jersey barriers every lap. So this is his deal. I was glad to hold him off.

"It was a fun race. It's hard to (imagine) winning three like this at a big place like this, but I'm fortunate to run good here. I love racing in Iowa and have had so much success here."

McCreadie groused in his postrace interview that he's "been bad here for about a decade," but he was good enough Saturday to be right in the mix before settling for yet another runner-up finish in what's become a bridesmaid season for him in the sport's biggest events.

"We're not disappointed tonight. I gave it all I had," said McCreadie, the former big-block modified ace and Knoxville's winner in 2008. "Mikey just knew, he kind of knew where I was, I figured. The TV screen probably let him know, and he just knew, any time I pressured him, he could get down and just disrupted me, and I was a little too tight to run the middle or the top because I needed that infield (berm) to turn. But all in all, it could've been worse."

During the lap 90-91 episode, "I had a feeling the outside was going to be good for a little bit, but I didn't know he was there," McCreadie said. "If I could do it over I would've just slid myself into (turn) three. Hat's off to Mikey. He gave it a shot."

The winner and runner-up both acknowledged that Erb was in position to win before his mechanical woes forced him back to 22nd for the lap-40 restart.

Erb's rear-end woes might've been terminal except for the quick work of his crew, which worked before and after the fuel stop to make repairs (crews were limited to adding fuel during the red-flag period, so the Best Performance Motorsports team had to pause until the yellow flag appeared, signaling the time to send drivers back to the track).

"Luckily they're good enough to be able to fix that. I don't think in times past I would've been able to make it back out," Erb said. "I don't know how much oil they got in it, or what. They got me enough to be able to finish. Under that (last) caution, I could tell it started locking up and they said it was smoking there at the end. When we fired back off, I felt like I was dragging a boat. We were just fortunate to finish.

"It wasn't our night, but our car was really good again. We'll just have to come back next year and see what we can do."

The race was slowed by four cautions, the first for a slowing Jonathan Davenport on the 22nd lap with a broken engine. The Blairsville, Ga., driver, who finished second to Erb in Thursday's preliminary feature, retired in 26th and fell to third from second in Lucas Oil points behind McCreadie and Hudson O'Neal, who finished seventh.

A lap-27 yellow appeared for a Tad Pospisil and Spencer Hughes tangle at the turn-two exit and a lap-40 yellow — which officials also used as a fuel stop — fell for Erb's demise.

The fourth and final yellow appeared on the 74th lap when sixth-running Ricky Thornton Jr. slowed and headed to the pits.

Notes: Marlar won his third straight 100-lapper at Knoxville; he hadn't entered Knoxville since '17. ... He notched his second Lucas Oil Series victory of the season and 15th of his career ... His check was Marlar's second-richest from a race purse; he earned $50,813 for a second-place finish at Mansfield (Ohio) Motorsport Park's Dirt Million in 2019. ... Fifteen drivers completed 100 laps. ... Jason Feger had engine problems in his own car, so made a start-and-park in Brandon Lance's No. 248. ... Tad Pospisil earned $4,000 in the preceding Limited Late Model event co-sanctioned by sister tours: the Malvern Bank Super Late Model Series and Hoker Trucking Series.

The 100-lap Knoxville Nationals finale will be broadcast live on the MAV-TV network with the show starting at 10 p.m. ET/9 p.m. CT. Driver introductions will precede the race’s green flag. … A fuel stop for teams to fill up their cars’ tanks is scheduled to take place at the first caution flag that flies between laps 30 and 50. If there is no caution during that stretch, officials will stop the race at the halfway mark for teams to refuel. … Polesitter Tim McCreadie will look to lengthen his Lucas Oil Series points lead — now sitting at 270 points over Jonathan Davenport and 275 over Hudson O’Neal — in tonight’s feature, the lone event of the Knoxville Nationals tripleheader offering points. Nine events remain on the 2021 Lucas Oil Series schedule. … Saturday’s pair of B-mains produced three more first-time Knoxville Nationals feature starters, pushing the total number of racers making their initial appearances in the century grind to seven. Kyle Strickler, Spencer Hughes, Tad Pospisil and Logan Martin locked into the headliner through points; Kyle Hammer, Garrett Alberson and Charlie McKenna joined them by transferring through the consolations. … B-main winners Tony Jackson Jr. and Ryan Gustin will both make their second career Knoxville Nationals feature starts but first since 2013, when Gustin finished 18th and Jackson was 32nd.