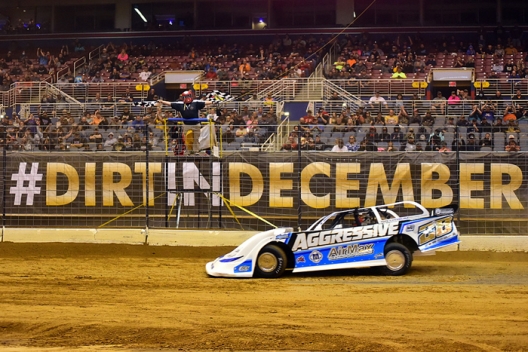 ST. LOUIS, Mo. — Tyler Carpenter doesn't come to the The Dome at America's Center to make friends. Nor does he make December trips to the Castrol Gateway Dirt Nationals for mild, PG-rated interviews.

The 30-year-old Parkersburg, W.Va., says he comes to prove he's as talented as bigger-budget racers and to win, which he did for the third consecutive time over two years at the fifth-mile oval in Thursday's split-field 25-lap preliminary feature that paid $5,000.

The pole-starting Carpenter led all but one lap, surviving serious skirmishes in traffic that knocked his closest pursuers out of the race as he pulled away late to win by 1.697 seconds over sixth-starting Bob Gardner of East Peoria, Ill.

"You don't come here to make friends," Carpenter said in victory lane in response to criticism from Ricky Thornton Jr., whose second-running car was eliminated in a lap-15 incident. "I don't want to make no damn enemies, but I didn't come here to make friends, and I'll be daggoned if I gave up this race over lapped traffic. I don't think he had a (chance) in clean air. I ain't trying to toot my own horn, but I was going to win this race."

Following Carpenter and Gardner to the checkers was 12th-starting Tanner English of Benton, Ky., while Kyle Hammer of Clinton, Ill., and Shannon Babb of Moweaqua, Ill. — who recovered from a lap-three spin — rounded out the top five finishers in a rough and tumble affair that eliminated eight starters and left tattered sheetmetal on most of the finishers.

Carpenter cruised early in the race with Thornton and Brandon Sheppard (who piloted the Donny Schatz-owned No. 15) giving chase, drawing closer as the frontrunners approached slower cars at the halfway point.

Carpenter was hung up behind the side-by-side running cars of David Webster and Jayme Zidar, allowing Thornton to nip Carpenter at the flagstand to lead the 14th lap. With the frontrunners still behind the slower cars, Carpenter fought back past Thornton in turns one and two while making contact with Webster while Sheppard was right in the mix.

At the flagstand on the next lap, Zidar's left front got into the right side of Carpenter's car, sending the sideways Zidar across the frontstretch and into the infield as he collected the cars of Thornton and Sheppard, who suffered a right-rear flat tire.

Neither pursuer was pleased with Carpenter's tactics, and Thornton, amid expletive-laced comments on the FloRacing stream, said that that "we're over here making laps and he's trying to wreck all the lapped cars."

With Thornton and Sheppard eliminated, Carpenter's prime worry was the right-side door dangling after the contact with Zidar, but the sheetmetal stayed in place and Gardner wasn't able to mount a serious challenge over the final 10 laps.

Carpenter, who in the previous St. Louis indoor event captured a $5,000 prelim and $30,000 finale in 2019, was in his element. In his victory lane interview peppered with non sequiturs and salty language, he took a poke at hometown driver Gordy Gundaker and ripped "keyboard warriors" but embraced the Dome's fans.

"I love it man. I love being the face of this place. Love me or hate, me, I don't even care. I'll tell you why I love this place. It's an equalizer," said Carpenter, a winner of 12 Late Model features at 10 tracks entering the weekend. "I can't run with these guys. I can't event (keep up with them) on them big tracks. And it ain't because I ain't got the capability. I can wheel just as good as anybody. Because I ain't got the (backing) that these guys have got. I've gotta work every day, feed five kids and my family, and run a business. I'm here where it shows (a) real racer. If you've gotta earn it, bust your ass and you'll get it."

Along with the incident that ended the races of Thornton and Sheppard, four other cautions slowed the action along with a 15-minute midrace air quality break.

Two cautions came out before a lap was completed, the first for inaugural Gateway winner Scott Bloomquist of Mooresburg, Tenn., who started outside the front row, got into the infield concrete barrier in turn three on the opening lap. On the next attempted start,  Trevor Gundaker spun to draw another yellow. Babb's third-lap spin collected Ryan Montgomery and Zidar.

The last of five slowdowns came on the 21st lap when Dewayne Keifer went around in turn four with Webster and Scott Bell — whose car ended up partially atop the Keifer and Webster cars — getting caught up in the mess, which required a lengthy cleanup.

The top four in Thursday's prelim are locked into Saturday's 40-lapper paying $30,000-to-win and Thursday's competitors get Friday off for the second split-field prelim, a $5,000-to-win program identical to Thursday.

The return of the Castrol Gateway Dirt Nationals comes on a day boasting weather decidedly unlike what event attendees are accustomed. Thursday’s high temperature is a spring-like 70 degrees and no wet (and notably icy) conditions are in the forecast; with the pit area doors open for ventilation and cars required to go outside for fueling and to line up for each race, the warmth is welcomed by all. … Event promoter Cody Sommer said the fifth-mile oval’s layout isn’t precisely identical to the last Dome action in 2019, but there isn’t much variance from the past. “There always will be a little difference because we’re starting from scratch building a track every year,” he related. “There’s a little more banking on entry and exit (of the corners), but nothing major.” … Sommer announced on the eve of the Gateway Dirt Nationals that the winner of Saturday’s Super Late Model finale will receive an opportunity to run a NASCAR Camping World Truck in the circuit’s 2022 dirt event at Knoxville (Iowa) Raceway. He noted that leasing a Truck ride could exceed $50,000, adding more value to Saturday’s $30,000-to-win race. … This year’s event format has the the Late Model field split for two preliminary programs: Thursday’s show has 39 entries and 41 cars are scheduled to race on Friday. The 80 total cars would represent the smallest turnout in the five-year history of the Gateway Dirt Nationals, falling below the 86 cars that were signed in for the 2019 event. … The top four finishers in the 25-lap, $5,000-to-win features on Thursday and Friday will transfer directly to Saturday’s 40-lap headliner. The balance of the field will be determined by last-chance races on Saturday. … Car counts for the weekend’s other divisions number 27 modifieds (Thursday’s field) and 19 midgets. … Nick Hoffman of Mooresville, N.C., is pulling triple-duty, adding a midget ride to his own modified and seat in a second Scott Bloomquist Racing Late Model. … Mooresburg, Tenn.’s Bloomquist, who won the inaugural Gateway Dirt Nationals in 2016, has a more economical Mullins LS engine under the hood of his machine for the weekend. … Defending event champion Tyler Carpenter of Parkersburg, W.Va., has his Kryptonite car in Thursday’s field wrapped in a fresh Aggressive Graphics-produced look. His father Freddie’s car sports a police-supporting “Back the Blue” theme and his older Chris are also entered but they are scheduled to race on Friday. … First-time Dome entrants Tanner Collins of Franklin, Ga., and Austin Horton of Noonan, Ga., live close together in the Peach State and traveled together to the Dome in the same trailer. Collins raced this evening while Horton runs on Friday. … Ryan Montgomery of Fairmont, W.Va., is making his Dome debut driving the western Pennsylvania-based Suppa Racing No. 4s, a machine he successfully ran several times during the second half of the 2021 season. ... Jon Woods of Dakota, Ill., escaped injury during his qualifying laps when he slid high off turn two, climbed the outside wall and rolled his car onto its roof. ... Chad Zobrist of Highland, Ill., timed 10th-fastest in the first qualifying group but had to be pushed in due to terminal engine trouble (hole in the oil pan).