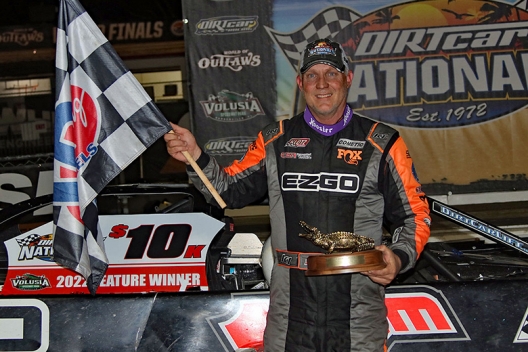 BARBERVILLE, Fla. — After winning his second Georgia-Florida Speedweeks main event of the season and second in World of Outlaws Case Equipment Late Model Series action at Volusia Speedway Park this year, an emotional Dale McDowell said that before heading to Florida he may have wondered if he was up to the challenge of returning to the track following his four-month layoff after undergoing season-ending prostate cancer surgery last September.

With his second $10,000 victory of the season in the books, the 55-year-old Chickamauga, Ga., native needn’t worry. He seems well up to the task. Grabbing the lead on a lap-18 restart from race-long pacesetter Kyle Hammer of Clinton, Ill., McDowell led the rest of the way to win Thursday’s WoO feature at Volusia.

McDowell survived a rash of mid-race cautions before holding off Devin Moran of Dresden, Ohio, by 0.952 seconds for his fourth career Volusia Winternationals triumph. It’s his second Volusia victory this season to go along with Jan. 21’s Sunshine Nationals win.

“Just complete blessed … been through a lot. I’m just lost for words,” said McDowell. “We came down here in January just to see if we were worthy of coming back and it’s been a dream come true. Pretty emotional ‘cause (I have) been through a good bit. So happy to be here.”

After falling back two spots on the opening lap, ninth-starting Moran rallied to the front before settling for his seventh runner-up finish of the 2022 Georgia-Florida Speedweeks. Darrell Lanigan of Union, Ky., rallied from 12th to third, while Chris Madden of Gray Court, S.C., finished fourth and 18th-starting Tyler Bruening of Decorah, Iowa, improved 13 spots to complete the top five.

McDowell, who started fourth, lingered just inside the top five for the first few laps behind early front runners Hammer, Madden, Ricky Thornton Jr. of Chandler, Ariz., and Mark Whitener of Middleburg, Fla. Hammer, who got the jump on polesitter Brandon Overton of Evans, Ga., on the opening lap and paced the first 17 laps, held a 0.297 of second lead over Madden when the caution waved for Winfield, Tenn.’s Mike Marlar, who slowed with a left rear flat.

McDowell took advantage on the restart, making a third-to-first move as he slipped by both Madden and Hammer to take the lead.

“(Hammer) went in the corner and kinda went high and Chris kinda went low and I went through the middle of (turns) one and two in the holes and didn’t bounce and just somehow come out with the lead,” said McDowell.

Hammer, a WoO rookie hopeful who started from outside the front row, slipped to fourth on the restart before spinning out of contention a lap later. He pulled off the track and was credited with 27th place. Hammer sprinted into the lead on the opening lap ahead of Overton, but action was slowed quickly as Overton’s night ended in a plume of smoke on the first lap. Suffering his second blown engine in as many nights, Overton, who won Wednesday despite engine failure with two laps remaining, went to the pits with fluid trailing from under his car, leaving others to chase Hammer.

“I felt like we were doing a great job there. We’re new to this and I was watching dad there and just got our signals mixed up and I picked the wrong line going into (turn) one on the restart,” Hammer said. “I felt like I gave them enough room (on the restart) and apparently the one driver who felt like I didn’t leave him enough room drove me all the way to the inside wall.”

Moran, who was up to third by lap 19, took second from Madden on lap 20. During a nine-lap green flag run between laps 21-30, Moran bounced from second to fourth. On the final restart however, he passed Madden for second and held it to the finish. He closed to within a half second with two laps remaining, but McDowell couldn’t be caught.

“I was just gonna run my race, where I had been,” said McDowell. “(Brother and crew chief) Shane (McDowell) told me that I would gap (Moran) in open racetrack and in a little bit of traffic he would close in. There on the last lap when we come up on the lapped cars, I didn’t know where to go. I’m glad we didn’t run a few more laps because obviously the second- and third-place guy can go wherever you’re not. Fortunately it worked out.”

McDowell had to protect his lead through a handful of mid-race restarts. The race was slowed by six cautions, half of them from laps 17-21.

Overton slowed to a stop on the first lap and Chris Simpson of Oxford, Iowa, slowed on lap five. Marlar’s flat drew a lap-1 yellow and Hammer’s spin brought out the caution in lap 19. Josh Richards’ rough Speedweeks continued as the Shinnston, W.Va., driver spun on lap 21. The final yellow was for Brent Larson of Lake Elmo, Minn., who had slowed with a left rear flat on lap 30.

McDowell said he used the same philosophy each restart: keeping doing what was working. “I don’t think I (was) good as those guys (way up top),” he said. “The way Shane has the car set up, it was pretty good down here in January obviously, so, I just aimed back for the holes (in the track). We got a little work to do in the slick part of the racetrack. The other night we were decent when the holes weren’t there, so, I don’t know what we’re doing. We’re just enjoying it.”

Moran, whose three victories and slew of runner-up finishes during this Georgia-Florida Speedweeks has him off to a career-best start, thinks he may have found something during his runner-up finish behind Hammer in Thursday’s second heat that could help him to a fourth Speedweeks win.

Lanigan’s third-place run came after a last-lap pass by Thornton in the sixth heat took him out of the redraw and dropped him to 12th on the starting grid. He picked up five positions in the first eight laps and then methodically worked his way to a podium finish from there.

“We’ve just been working on this thing hard every night here,” said Lanigan. “Kevin (Rumley has) helped us a ton. He got us really close tonight. It’s definitely improved our program a ton since he’s been helping. We’ve got our car close now. It’s pretty balanced where we can drive in traffic. The first couple nights we couldn’t drive in traffic and it’s pretty balanced right now.”

Notes: Dale McDowell’s fourth career Volusia Winternationals win ties him with Jeff Purvis, Ronnie Johnson, Donnie Moran, Steve Francis and Chub Frank. … He now has 14 career World of Outlaws wins and six career Georgia-Florida Speedweeks wins. … McDowell said the disappointing finish from Wednesday’s first feature — when a tangle with Chris Madden left McDowell turned around on the backstretch — was little more than that now: a disappointment. “I felt like we could have been right there. But you just try to sweep that behind you and fortunately it worked out for us tonight,” McDowell said. … After yet another runner-up finish, Devin Moran said he’d much rather win features during the week rather than the weeklong points title. “I want them little gator (trophies),” he said. “They pay way more than that big one.” … Chris Madden lost three spots on the lap-30 restart when Mark Whitener slid ahead of him in turn two, forcing Madden to get on the brakes. … Darrell Lanigan grabbed third from Whitener on lap 33 with a pass in the inside. … For the second night in a row, the feature starting grid reached 30 cars, with Gordy Gundaker, Brent Larson, Max Blair and Josh Richards taking emergency provisionals. … The DIRTcar Nationals continue Friday with another $10,000-to-win World of Outlaws program.

Thursday’s DIRTcar Nationals Night 4 brings truly gorgeous Sunshine State conditions: partly sunny skies with the high temperature topping 80 degrees, the warmest day of the week. … A field of 58 cars is signed in for the second consecutive night. … The only change from Wednesday’s roster: Dylan Thompson of Paducah, Ky., is making his first start of the week after Tanner English of Benton, Ky., drove the machine on Monday and Tuesday, while Ross Robinson of Georgetown, Del., decided to head home after recording a Speedweeks-best finish of sixth in Wednesday’s held-over WoO feature. … After a thorough examination of Ashton Winger’s G.R. Smith-owned Longhorn Race Car in the wake of his $10,000 victory in Wednesday’s postponed A-main — a race that saw the 22-year-old from Hampton, Ga., bounce wildly over the rough patch of track between turns one and two throughout the 40-lap distance — his crew found the abuse had twisted the motor mounts that bolt to the engine, among other damage that needed to be repaired. … Brandon Overton of Evans, Ga., made a motor change for Thursday’s action after pulling the powerplant that expired during the final laps of his victory in Wednesday’s regularly-scheduled 40-lap feature. … Monday winner Ricky Thornton Jr. of Chandler, Ariz., is running his second SSI Motorsports car after the machine he drove on Wednesday was sidelined by terminal motor trouble in heat action. … Daulton Wilson of Fayetteville, N.C., and the Justin Rattliff Racing team have their Longhorn pieced back together after repairing virtually its entire back half other than the rearend itself following Wilson’s slaps of the outside and inside walls in a Wednesday heat. … Tuesday victor Ryan Gustin of Marshalltown, Iowa, retired from Wednesday’s regularly-scheduled feature after just a single lap because he had run out of helmet tearoffs. The reason: a rock or clod of mud came up and broke the tearoff post on his helmet, causing him to pull off all 20-or-so tearoffs he had on his helmet in one motion.