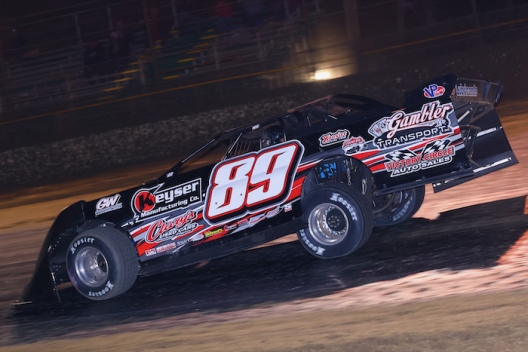 BARBERVILLE, Fla. — In battling a couple of smooth driving veterans Wednesday at Volusia Speedway Park, Ashton Winger was appreciative his elders cut him some slack in the 40-lap World of Outlaws Case Late Model Series event.

"I know I was all over the place there. I had to aim for them holes for traction," the 22-year-old Hampton, Ga., driver said. "When I tried to back my corner up, I'd push, then I'd have to use the brake pedal to turn and then I just go hopping down here."

While Winger's efforts weren't particularly pretty, they were plenty effective in carrying him to a $10,000 payday, the first of his career at Volusia and first-ever in Georgia-Florida Speedweeks Super Late Model action.

The pole-starting Winger lost the lead to Chris Madden of Gray Court, S.C., on a lap-six restart but quickly regained it, then kept Hall of Fame driver and fellow front-row starter Dale McDowell of Chickamauga, Ga., in check late for a victory in a makeup of Jan. 22 rainout. Winger's nightcap victory followed Brandon Overton's $10,000 WoO payday in the night's regularly-scheduled action.

McDowell, who slipped back to fourth on the first lap but recovered well, finished two seconds behind at the checkers with Madden in third. Devin Moran of Dresden, Ohio, finished fourth, one spot ahead of Hudson O'Neal of Martinsville, Ind.

Winger got the jump at the outset, but his fourth career World of Outlaws victory was in doubt when Madden went past on a lap-six restart. The winner was grateful Madden left him room to regain the point a lap later.

"I need to thank Chris there," Winger said. "He had me all about passed and he left me the entire racetrack. I really appreciate him racing me clean, and Dale and all them guys."

Out of breath in victory lane after fogging up his helmet in the final laps, Winger was glad to hang on.

"This is awesome," he said, adding that "I felt like I got into a pretty good rhythm there was about 15 (laps) or so to go. And then with about seven or eight (laps) to go, I felt that I probably killed my tire and I couldn't quite get by them lapped cars like I wanted to."

What does the victory say about how G.R. Smith's Team 22 Inc. operation and Winger are gelling after several months together?

"Actually it says my team itself is pretty good. I'm not very good though. I struggle here really bad. I don't know what it is," Winger said. "I feel like if I could ever just start on the pole of every race, I'd be all right."

The other podium finishers found themselves talking more about the night's previous 40-lapper — Madden and McDowell got together midway through the race in turn two while battling in the top five, sending McDowell for a spin.

While McDowell finished second to Winger, his opportunity for a second podium finish "was out of our control and wasn't meant to be, I guess," he said. "I got turned around there, you know, so I wasn't overly thrilled about that, because you're racing with, you feel like, good guys that you would race that way. So anyway, something happened there.

"But for us to have a top-three on this event, it definitely helps. The car's still a little tight, so we've got a little bit of work to do, but so it's OK."

Madden admitted that "we're kind of out of control down (in turns) one and two. I got into Dale that (previous) race, but he come across and I was there and it just happened you know?

Four cautions slowed the action, including three lap-six yellows. After Chris Simpson slowed to draw the race's first yellow, Ryan Gustin and Tanner English tangled on the ensuing restart in turn one. Shane Clanton slowed on the next restart for the third quick yellow on the same lap.

The fourth and final caution appeared on the 22nd lap when Daulton Wilson spun at the top side of turn four.

Notes: Winger's previous WoO victories have come at his home track of Senoia (Ga.) Raceway and twice at Cedar Lake Speedway in New Richmond, Wis., all in the previous two seasons. ... Fifteen of 27 starters completed 40 laps. ... All but two drivers (NASCAR Cup champ Kyle Larson and four-time Lucas Oil Series champ Jimmy Owens) returned from the January event for the makeup. ... While Winger's victory came during the 51st annual DIRTcar Nationals, his victory technically goes down as a Sunshine Nationals victory.

In a weekend plagued by rugged track conditions and weather, Saturday's action at Volusia Speedway Park's Sunshine Nationals has been wiped out ahead of forecasts for cool, wet weather on what was to be a doubleheader schedule. Saturday's regularly schedule event was cancelled while Friday's postponed event, rescheduled for Saturday afternoon, has been rescheduled for Wednesday, Feb. 16, during Volusia's DIRTcar Nationals. The postponed Crate Racin' USA event has been rescheduled for Feb. 7 while the 602 Crate Late Model feature will be made up on a date to be announced.

Misty conditions that evolved into rain forced the postponement of Friday evening's World of Outlaws Morton Buildings Late Model Series. The $10,000-to-win WoO feature, along with features for two undercard divisions, were rescheduled for 1:30 p.m. Saturday with gates opening at noon. The makeup features will be followed by Saturday's regularly scheduled Sunshine Nationals finale.