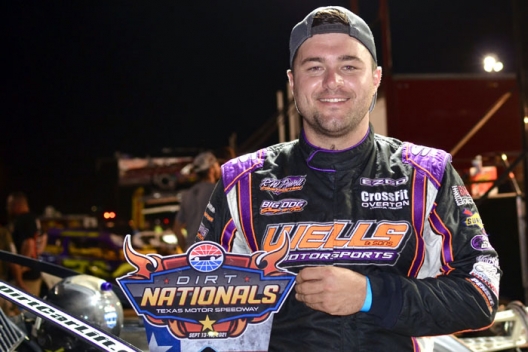 Joshua Joiner/DirtonDirt.com
Brandon Overton shows off the trophy for his $50,000 victory.
What won the race: Top-ranked Brandon Overton of Evans, Ga., overtook fellow front-row starter Stormy Scott on the third lap and led the rest of Saturday's 30-lap Texas Dirt Nationals for a $50,000 payday at the Texas Motor Speedway Dirt Track. Overton took the checkers 0.571 of a second ahead of Bobby Pierce in the unsanctioned event at the 4/10-mile oval in the shadow of one of NASCAR's showplaces.
Key notes: Devin Moran ran second most of the way and took a shot at winner Brandon Overton on the outside in turn one on the final lap and slipped back to fourth behind Overton, Bobby Pierce and Stormy Scott. ... The 30-lapper had a single slowdown. ... Chris Madden nearly got upside down in a tangle at the end of the frontstretch with Max Blair that drew a lap-three red flag as his twirling car briefly got up on its side. ... Steven Whiteaker Jr. was also caught up in the wreck.
On the move: Runner-up Bobby Pierce of Oakwood, Ill., started sixth.
Winner's sponsors: Overton’s Wells Motorsports Longhorn Chassis is powered by a Clements Race Engine and sponsored by CrossFit Overton, Allstar Concrete, E-Z-Go, Big Dog Stump & Tree, R.W. Powell Construction, Convenient Lube, Allstar Performance and Topnotch Kustom Koncepts.
Current weather: Clear, 82°F
Car count: 34
Fast qualifier: Stormy Scott
Time: 15.915 seconds
Polesitter: Stormy Scott
Heat race winners: Stormy Scott, Devin Moran, Brandon Overton, Billy Moyer
Consolation race winners: Ray Allen Kulhanek
Editor's note: Results and race details are unofficial.
From staff reports

FORT WORTH, Texas — Brandon Overton made quick work of the field Saturday at Texas Motor Speedway. In the process, the 30-year-old Evans, Ga., dirt racer made a quick $50,000.

In a 30-lapper that lasted barely 20 minutes, Overton led all but the first two laps of the Texas Dirt Nationals to capture his fifth victory of the season paying at least $50,000. He overtook polesitter and fellow front-row starter Stormy Scott on the third lap and turned back Devin Moran's last-lap bid in turn one to grab a victory at the 4/10-mile oval in the shadow of one of NASCAR's showplaces.

"I don't think I've ever won 50-grand in 30 laps," Overton said while soaking up more success in victory lane. "It is what it is. We'll take it. Just fortunate, like I said, everything keeps going our way and we're going to ride it as long as we can."

Bobby Pierce of Oakwood, Ill., who ran third most of the way, inherited the second spot on the final lap when Dresden, Ohio's Moran gave up the preferred inside groove in a turn-one bid to get around the infield-hugging Overton after the white flag dropped.

Pierce ended up a half-second behind Overton at the finish with Las Cruces, N.M.'s Scott getting third and Moran settling for fourth. Michael Arnold of Hattiesburg, Miss., rounded out the top five in the 24-car field with 16 starters completing 30 laps.

Friday's 25-lap preliminary winner Cade Dillard of Robeline, La., gave up the fifth spot on the third lap with a deflating right-rear tire he elected to change. He restarted in the rear and finished 14th.

In a race with passing at a premium most of the way, Overton kept his pursuers in check in the inside lane.

"Just being patient. When the track does that, you just kind of gotta bide your time and make sure you don't make no mistakes," Overton said. "I seen Devin right there on the last lap, you know, try to make something happen, you know. It is what it is. It was just too latched up in the bottom and I was just trying to keep my distance from the lapped cars and make sure I didn't get in there and scoot out of (the inside lane).

"What an unreal year, you know? I don't even know how to describe it, man. It's awesome," Overton added after his first victory at the track that sports and infield tunnel that allows cars to exit to the pits. "I'll tell you what, this place is neat, you know? The tunnel's the coolest thing, to drive through it. Awesome place. Maybe they might've could've (done some) track prep right before our feature, you know, to make it a little bit better for the fans."

While Pierce ended up with $20,000 for second, Moran collected $7,500 for fourth but said he didn't regret his Hail Mary bid to overtake Overton, but he wished he'd have had a racier track surface.

"Like (crew chief and brother) Wylie said, we didn't come here to run second. We came here to win," Moran said. "That's what we were trying to do, but just circumstances didn't work into our favor this weekend. Obviously Brandon's been the best driver in the country all year and to try to beat him, and be in contention and beat him, I felt like we were really good. Just, once again, circumstances weren't favorable.

"I was trying to see if I could get a run on the outside. I was up to his side, I felt like. It's just, I was hoping there was enough rubber that I could hook my left-front (tire). As long as I did that, I would've been able to at least try to go down the backstretch with him. But it wasn't there. If I would've known it would've been like that, I would've tried all the way on the cushion — or just stayed in line. Oh well. We put on an effort, at least. Yeah. Frustrating that the track sucked that bad."

Pierce was the benefactor of Moran's move as he chased Overton home in the second spot.

"I was kind of surprised (Moran) went for it there. You know, second-place is a pretty good payday. I know he really wanted to beat Brandon for that $50K, but I was surprised he did that. But, you know, I'm really glad he did and, you know, hat's off to him for trying. That was a really good effort there."

Would Pierce have tried such a move?

"If there was no one behind me ... I probably would've," Pierce said. "But I was right behind him, and all it took was a little bobble and you get out of that rubber line, especially when the track's been rubbered up for that long. You can't really do that. But it was a good effort."

The race's lone slowdown came on the third lap and continued a frustrating weekend for Chris Madden of Gray Court, S.C.

The red flag appeared when Madden and Max Blair got together at the end of the frontstretch, sending Madden's car twirling and briefly up on its side before it returned to its wheels with heavy damage against the turn-one wall. Steven Whiteaker Jr. was also collected in the scramble with Blair the only driver able to continue. No injuries were reported.

Madden's other car also suffered significant damage in a frontstretch collision with Overton in Friday's 25-lapper.

Heat races started straight up from qualifying. Event officials had originally planned a double heat race format but switched to a single set of heat races for Friday’s opener with a four-car invert for the start of each heat race. Officials again went with a single set of heat races for Saturday, but did away with the invert. … All four eight-lap heat races ran without incident. The only caution waved in the fourth heat race when official’s called back the initial start. … The fourth heat featured a replay of the lead battle in Friday’s feature, only this time Billy Moyer of Batesville, Ark., came out on top of Cade Dillard of Robeline, La. Dillard held off Moyer’s late challenge on Friday to earn a $10,000 victory. … Sam Seawright of Rainsville, Ala., switched to a backup car before his heat race. … Boom Briggs of Bear Lake, Pa., only made one lap in qualifying after getting into the wall with the right-rear corner of his car. He made repairs and moved up to third third in the second heat race. … Billy Moyer Jr. of Batesville, Ark., did not return for Saturday’s action after getting caught in a hard crash during Friday’s feature.