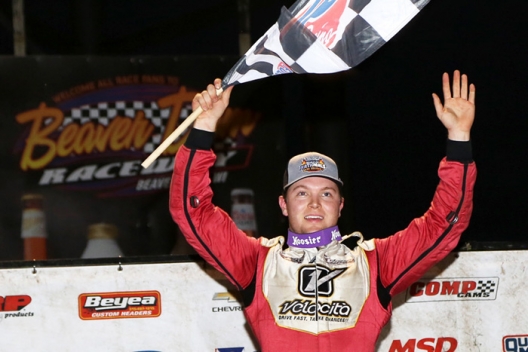 “That was a tough one for sure … one of those deals where the track was a bit tricky,” Pierce said. “I didn't really know exactly where to run. (The track) had some crumminess to it here and there. All-in-all it was a good race car I had. I have to give thanks to my dad, the guys, Josh and Kyle, and everyone watching back home."

The race was stopped briefly on lap 37 when Thomas Hunziker of Bend, Ore., got upside down on the front stretch after making contact with third-running Cade Dillard of Robeline, La. Dillard and Hunziker came together while exiting turn four as Dillard attempted to squeeze between Hunziker’s slower car and an infield yuke tire.

“I just hate that for (Hunziker). He was doing what he needed to do,” said Dillard after exiting his car. “He was staying down. I thought I had enough room under him to slip by him.”

Hunziker, a native of Switzerland making his first Summer Nationals foray, said he “was just going for a ride” after the two cars made contact.

“Something happened behind me. I was just holding my line,” Hunziker said. “I think Cade was a lot faster and I guess I was just in his way.”

While the accident temporarily brought out the red flag, it did little to slow Pierce’s momentum. On the restart he bolted away from Sheppard and Brian Shirley of Chatham, Ill. Though Sheppard, who started fourth, mounted a brief challenge, Pierce pulled away to win by more than a half-second. Ashton Winger of Hampton, Ga., used the late caution to get around Shirley for third, while Shirley settled for fourth, one spot worse that where he started. Ninth-starting Tanner English of Benton, Ky., completed the top five after rallying late as well.

“Feels great to get to the win,” Pierce said. “It feels like it's been a while since the first two races. I don't know if I had enough to pass Heckenast there. I saw something spark out of his header right before that happened, so I don't know what happened with it. It's probably electrical. It sucks for him. But I liked to see it just because it gave me the lead, but it sucks for him.

“Then I had Brandon to deal with. It's a bit nerve-racking when you have one of the best drivers right behind you. Sometimes being in the catbird seat is better you know. I was kind of confused on exactly where to go on the racetrack to get the best line. To hang on to it feels really great.”

Sheppard, making his first DIRTcar Summer Nationals start of the season in his family-backed Rocket Chassis, managed to pull alongside Pierce once, but Pierce was able to cleanly defend the challenge. He said he’s hopeful his runner-up finish is a good omen for the week.

“I just didn't have enough to keep that run going,” Sheppard said. “Truthfully coming out of (turn) two would be the ideal place to be side-by-side with him. Like off of (turn) four you could drift out there and stay going off the corner and I had a lap car in front of me too . It just wasn't our night, but we'll get it ready to roll again tomorrow (at Davenport Speedway). We had a really fast car. If our car is this fast all week, I think we'll hopefully (win) one or two of these things before the end of the week.

“Everything ran really good, so first night out with our Summer Nationals swing is looking pretty good. We need to qualify better tomorrow. We got ourselves behind tonight. I know we started fourth there in the feature and we were there at the end, but Bobby did a good job and we couldn't get around him, so we'll try again tomorrow.”

Heckenast was the only driver not overtly concerned with getting around Pierce, who started on the outside front row. Heckenast grabbed the lead on the opening lap and then turned back Pierce over the next five laps while asserting himself at the head of the pack. Heckenast said he was just maintaining a good rhythm when his car began to backfire and lose power.

“Oh that sucks. We weren't pushing the issue at all. I feel like we had the race somewhat under control. I'm not saying we would have won, but I wasn't pushing it for any reason because I was trying to save my tires and I was keeping (Pierce) in check and then … Man, that's just terrible. Think they'll still give us a check?”

Notes: Thirteen of the 21 starters completed 40 laps. … Pierce won his 30th career DIRTcar Summer Nationals feature and second in Wisconsin. … The tour made its first trip to Wisconsin since June 19, 2016, when Pierce won at Wilmot Raceway. … The Summer Nationals returned to Beaver Dam’s third-mile oval for the first time since 2000. ... Don O'Neal of Martinsville, Ind., won the tour's debut at the 28-year-old track (then called PowerCom Park Raceway). ... Only two series events were held over the previous 10 days amid several rainouts and four scheduled off-days. ... Tim Lance Jr. of Brimfield, Ill., didn’t start the feature after a rollover accident in time trials.

Frank Heckenast Jr. lowered the track record with his 13.104, breaking his own mark of 13.484 seconds set three years ago. The only problem? The Frankfort, Ill., driver feared starting on the pole of the heat would be tough at a track where the high side is often dominant early. He remembers qualifying well at Beaver Dam but struggling in heats. "We're going to change that tonight," he said just before the prelim. Indeed Heckenast got outside fellow front-row starter Jason Feger at the conclusion of his first heat lap and raced to a prelim victory that gave him the pole for the 40-lap feature. ... Tim Lance Jr. of Brimfield, Ill., was OK after a turn-one rollover accident in time trials. The team was thrashing to get ready for the feature. "I don't know what happened. It was not very fun," Lance said. "As soon as I turned left I was looking at the ground. Oh well, it happens." ... Brian Shirley outdueled Billy Moyer Jr. in the second heat as they twice swapped the top spot before Moyer ran out of room exiting turn two. ... Teammates Jeff Roth and Joe Godsey ran into pump problems in prelims. Roth was forced to a backup car after hot laps because of fuel pump problems while Godsey missed time trials and his heat after breaking a power steering pump. ... The program is running quickly with a single undercard division (legends). ... Dennis Erb. Jr. of Carpentersville, Ill., was a no-show as he tends to the health of Joey, his 12-year-old Pomeranian who fell ill last week.