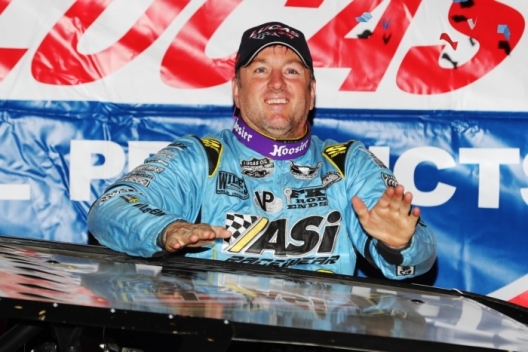 WEST BURLINGTON, Iowa — Tim McCreadie has finally got his season pointed in the right direction, but the reigning Lucas Oil Late Model Dirt Series champion is far from satisfied. There were 19 races between McCreadie’s first victory of the season Jan. 31 at Bubba Raceway Park on Ocala, Fla., and his second victory of 2022 on April 22 at All-Tech Raceway in Ellisville, Fla.

But after winning just once in his first 23 starts, McCreadie now has three victories in his last 12 starts, the latest coming Sunday in the rain-postponed CRST Transportation Solution 50 at 34 Raceway in West Burlington, Iowa. McCreadie, of Watertown, N.Y., led flag-to-flag in the caution-free 50-lapper for his fourth overall triumph of the season and second with the Lucas Oil Series.

“We just gotta keep improving and tonight this car was spot on,” said McCreadie, while thanking car owners Donald and Gena Bradsher.

Earning $15,000 for the win, McCreadie and his Paylor Motorsports team left little room for improvement on Sunday. Starting from the outside front row after winning the second heat, McCreadie pulled away from polesitter Brandon Sheppard of New Berlin, Ill., on the opening lap and cruised to a dominating 9.272-second victory over the reigning World of Outlaws Case Late Model Series champion who has decided to chase the Lucas Oil Series title this season.

While McCreadie steadily pulled away after the halfway mark to lead by as much as a half lap, Sheppard had to hold off a charging Earl Pearson Jr. of Jacksonville, Fla., on the final circuit. The third-starting Pearson settled for third, while Garrett Alberson of Las Cruces, N.M., started and finished fourth and Hudson O’Neal of Martinsville, Ind., improved one spot to complete the top five.

While there was little passing in the event that started in the daytime and drew just 22 entrants, McCreadie was complimentary of the track surface, which track officials reworked for close to an hour prior to the feature.

“Early I could roll through the middle there. Unfortunately the top was just really slimy over there most of the night,” McCreadie said. “It’s kinda crowned off over there now, but the track, they did a good job for what we were working with. We’ve had so many tracks this year that have just been rough.

“Listen, I don’t mind the rough, but I know the money’s a lot more to fix this stuff when the car looks like it’s out there (in) an off-road truck race. I appreciate that they had it smooth. I know they’re trying. I didn’t think it raced bad, but I won, so it’s always better when you win. You love rubbered-up racetracks when you’re winning."

Sheppard was still within three seconds of McCreadie with 15 laps remaining but as the leader continued to cruise out front, Sheppard struggled to keep pace.

“I was moving around trying everything and I think I got my tires overheated up in the top trying to hustle up there and then I moved down and it didn’t feel good in the bottom after that,” Sheppard said. “So I was moving around all over the place trying to figure out where I needed to be at on the track.”

While Sheppard experimented with his line, Pearson finally found one that suited him. He was 2.4 seconds behind Sheppard with seventh laps remaining, but quickly closed the gap. He managed to get to Sheppard’s quarterpanel on the final lap before finishing 0.233 behind in third.

“I felt (Pearson) underneath of me there on the last lap in (turns) three and four,” Sheppard said. “I really didn’t know where I needed to be at at that point ‘cause I felt OK in the bottom and I felt OK getting in in the top in (turn) three and I was just kinda trying to hold my own at that point. I knew I wasn’t going to catch Timmy without a caution for sure, so I was just trying to hold my own and see if I could find any speed.”

As Sheppard maintained, Pearson, winner of the first Lucas Oil Series race at 34 Raceway in 2010, closed in.

“I did find a different line there in traffic,” Pearson said. “I could come in high down here and get a run down the back straightaway. But all-in-all, 50 laps with no cautions, I can’t say enough about what the track prep people here did.”

Neither of them, however, had anything for McCreadie, who said he’s hardly had time to catch his breath after winning his first Lucas Oil Series championship last season.

“When (Jonathan Davenport) left (as a series regular) I thought man this might get a little bit lighter for a change. You never know what Jimmy (Owens) wanted to do this year,” said McCreadie. “So of course, here comes (Devin) Moran and Brandon Sheppard over and it’s like, man, I was hoping that for once maybe I could be the guy with the most experience. You know they keep you on your toes. They’ve come out and they’ve been strong. Maybe we have a small glimmer to try to chip away.”

Notes: McCreadie notched his 30th career Lucas Oil Series wins, good for seventh on the tour’s all-time win line, three victories behind Josh Richards of Shinnston, W.Va. … Nine cars finished on the lead lap. McCreadie had closed in on ninth-running Tyler Erb of New Waverly, Texas, with three laps remaining, but didn’t attempt to lap him. … Amanda Robinson, Ross Robinson’s wife and crew chief, unloaded the team’s backup car and made a rare series start. She finished 21st after completing four laps. … In victory lane, McCreadie got in a plug for car owners Gena and Donald Bradsher’s Mega Plumbing of the Carolinas. “If anybody’s interested in moving to the Carolinas, they’re hiring,” he said. “They’re hiring plumbers, they’re hiring all kinds of people. They go all over. It’s just like anything, you know the old saying is, if you want to work, they pay great. You can go to work man. Pull your pants up and get to work. That’s what we all need to do.”