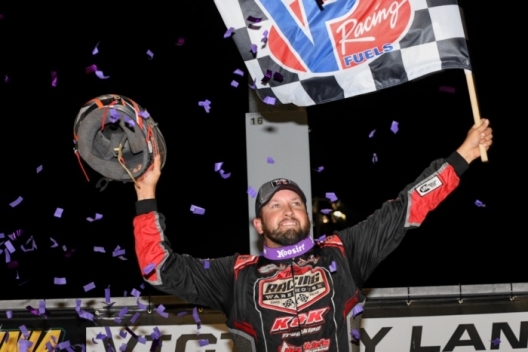 JAMAICA, Va. (Aug. 6) — The first time Chris Ferguson won the USA 100, the $10,000 triumph was a vital victory in the middle of an impoverished season for the then 24-year-old driver from Mt. Holly, N.C. My how things have changed since that win — Ferguson’s first of the 2014 season — eight years ago. While that much-needed victory way back when came at just the right time for Ferguson, his latest USA 100 win comes in the middle of one of his best seasons.

Leading the final 37 laps at Virginia Motor Speedway on Saturday, Ferguson pocketed a cool $20,000, double what he earned for his first USA 100 win. The victory also comes during a season in which he’s already won a pair of $50,000-to-win events — the Show-Me in Wheatland, Mo., and at dirt-covered Bristol (Tenn.) Motor Speedway — as well as at the famed Eldora Speedway in Rossburg, Ohio.

Ferguson had to make sure his tires were fresh enough to withstand Erwin’s late challenge. Erwin appeared to nose ahead to lead lap 45, crossing under the flagstand just in front of Ferguson, but he didn’t officially lead the lap according to timing to scoring, which had Ferguson ahead by a scant two-hundredths of a second.

“I appreciate Russell driving me clean. He gave me a little bit of room there with a lapped car,” said Ferguson. “I respect him and (Gregg) Satterlee and also Zack (Mitchell). That was a fun race. I just got kinda content there and was running a decent groove. I wasn’t really pulling away from them but they weren’t gaining on me. I think Russell may have turned the wick up on me.”

Russell managed to run Ferguson down in the waning laps, only to see his bid for the lead thwarted with five to go.

“As soon as I seen (Erwin), I didn’t feel like I was gonna be good enough to run the very bottom to hold ‘em off so at that point you just gotta get elbows up and get on the cushion. Luckily I didn’t make no mistakes up there and was able to pull away. I was pretty comfortable. For the most part I didn’t feel great, but I didn’t feel bad. I knew the tires was good (and) we were good.”

For Erwin, who was seeking his second career Ultimate Series win, it was another near miss.

“I think it was like 2014 and (Ferguson) was leading and we were passing for the lead and we blew up,” said Erwin. “We’ve been so close so many times. Every time we’ve come up here to this USA 100, you know, I’ve been trying so long to get that eagle (trophy). We’ve been close, I don’t know. It feels like I just needed a couple laps to get going there. He could fire off a lot better than I could.

“Congratulations to them guys. (Ferguson) ran a good race, a good smart race. I think the top four or five of us were battling pretty hard there at one point in time during the race. I needed them green flags to get going.”

Satterlee was among those drivers in the top five mixing it up throughout the main event. Satterlee held down the second spot for 18 lap. He even snuck by Mitchell to lead lap 11.

“Just needed to be a little bit better than these other two 22s here in front of me,” said Satterlee. “Started off really, really good at the beginning of the feature. It just seemed like once (the track) got cleaner I just wasn’t tight enough. I’m not really sure. I just kinda was not good enough there at the end. But congrats to these two guys. It was a fun race.”