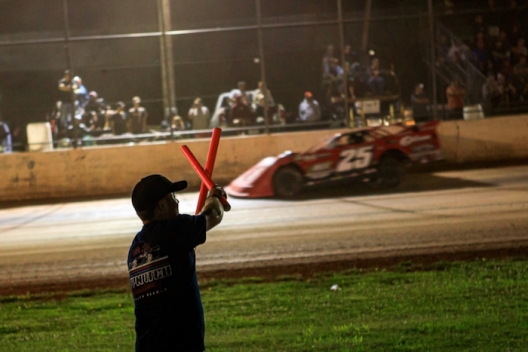 SUPERIOR, Wis. — Leading all 40 laps at Gondik Law Speedway, polesitter Shane Clanton of Zebulon, Ga.,  outran fellow Georgian and front-row starter Brandon Overton on Monday in the XR Superior Showcase for a $20,000 victory, Clanton’s second of the season on the XR Super Series.

Clanton built a lead of more than two second past the halfway point and took the checkers 0.867 of a second ahead of Evans, Ga.’s Overton for his fourth overall victory of 2022. XRSS points leader Chris Madden of Gray Court, S.C., improved five positions to finish third while Ricky Weiss of Headingley, Manitoba, and Joseph Joiner of Milton, Fla., rounded out the top five finishers in the first of two weeknight events at the 3/8-mile oval.

"Hopefully we got as good a car tomorrow night as we did tonight,” Clanton said. “We definitely made the right adjustments for the feature there. Lapped cars were a little hectic there, trying to get by ‘em. The air disturbs so much and you lose your nose. Hopefully we can make that just a little bit better for lapped traffic tomorrow.

“Greg Bruening of Skyline Motorsports and Tyler Bruening, they they give me everything I need to do to win this and we finally put in victory lane for ‘em.”

Overton said he settled for having a second-place car with aerodynamics making it difficult to overtake competitors.

“He just did all the right things, you know? Every time I’d get to him, he would just cut in front of me and I'd lose the nose,” Overton said. “I about got hung in the fence again (in turn four, just like he did in his heat race). It is what it is.”

Overton added that “you just gotta wait on traffic to mess ‘em up or that’s what happens, you run second.”

Madden, who took the third spot from Joiner on the 26th lap and started outside Overton on the double-file restart two laps later, couldn’t gain any more positions.

“It felt like we was pretty good right there. I just pushed down there the restart. I felt like I had had enough momentum to get by Brandon (but) I pushed down there and wasn't able to gain back,” he said. “But overall we had a great race car tonight.”

Most of the same drivers will return Tuesday for the second half of the XR Superior Showcase with another $20,000-to-win program for Super Late Models.

Notes: Clanton's first XRSS victory came June 14 at the Belleville (Kan.) High Banks, a triumph worth $40,000. … Mike Marlar of Winfield, Tenn., finished 13th for his second straight finish outside the top-five after a streak since mid-June of top-five finishes. … Brenden Smith of Dade City, Fla., got into the wall in time trials and took a provisional starting spot for the main event. … Among other drivers failing to make the feature lineup: Hall of Famer Jimmy Mars, Ryan Gustin, Shane Edginton, Jeff Massingill, Joe Godsey, Sam Mars, Mike Prochnow, John Kaanta and Thomas Hunziker.