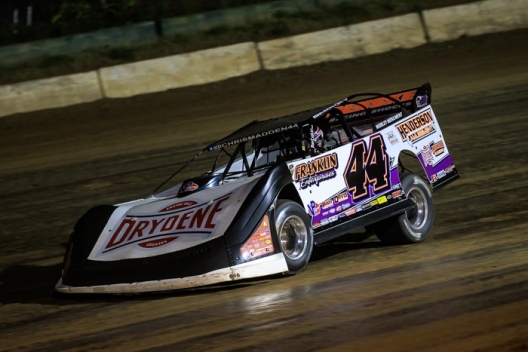 SUPERIOR, Wis. (Aug. 9) — Remember Chris Madden’s weekend-ending, car-crushing wreck just over two weeks ago at I-80 Speedway in Greenwood, Neb.? That potentially tide-turning accident has quickly faded into the recesses of time as just a blip on his astounding 2022 season.

The 47-year-old star from Gray Court, S.C., returned to victory lane Tuesday night for the first time since the incident, cruising to a $20,000 triumph in the 40-lap finale of the XR Super Series Superior Showcase doubleheader at Gondik Law Speedway.

It took Madden exactly four starts to get back in a winning groove in the wake of his crash that sent him home early from I-80’s Silver Dollar Nationals. He didn’t drive the new Rocket car he built to replace his wrecked machine — he parked that mount after bending its body in an Aug. 4 World of Outlaws Case Late Model Series feature at Cedar Lake Speedway in New Richmond, Wis. — but his battle-tested vehicle was almost flawless as he led all but three laps of Tuesday’s caution-free race in northern Wisconsin.

“We just tuned on it,” Madden said of his car. “It was pretty good earlier today and we just kept tuning on it a little bit.”

Starting second alongside polesitter Brandon Overton of Evans, Ga., Madden jumped ahead at the initial green to lead the first two circuits. Overton slipped underneath him to grab the top spot on lap three, but Madden slid around the outside of his fellow Southeastern to regain command for good on the sixth lap.

Madden went on to record his sixth XRSS checkered flag of the season by 1.864 seconds over Shane Clanton of Zebulon, Ga., who reached the runner-up spot with a lap-10 pass of Overton but wasn’t able to offer Madden a serious challenge as he fell short of sweeping the two-day program.

Overton settled for a third-place finish after leading laps 3-5. Seventh-starter Jonathan Davenport of Blairsville, Ga., reached fourth on lap 12 and finished there while Kyle Strickler of Mooresville, N.C., lost two spots but held on to complete the top five.

Madden’s victory was his 14th overall of the season and pushed him past the $700,000 mark in total 2022 earnings. Nearly half of that figure — $315,000 to be exact — has come from his six XRSS wins and the $100,000 bonus he picked up from XR for winning the points title of the four-race Bristol Dirt Nationals.

While Madden adeptly handled lapped traffic to keep Clanton at arm’s length, he did have one worry on his mind throughout the midweek feature at the 3/8-mile oval.

“We definitely got some work to do before Florence (Speedway),” he said, referring to the Aug. 11-13 Lucas Oil Late Model Dirt Series-sanctioned North-South 100 at the half-mile track in Union, Ky. “We got a terrible vibration. I couldn’t run over about half-throttle after the start, it was shaking really bad.”

Madden survived, though, and was able to give his crewman, Stephen “Goose” Eldridge, a checkered flag on his 30th birthday.

“This is for Goose,” Madden said with a smile.

Clanton, 46, felt his subpar performance in time trials might have cost him back-to-back victories with his Capital Race Car.

“We messed up qualifying a little bit and it put us in a hole,” Clanton said. “We rebounded in the heat race (to finish second behind Overton) and got us a good starting spot (fifth) and drove to second. I wish we could’ve started on the pole. I think we could’ve won the race.”

Clanton still headed home with a smile on his face. His $20,000 win on Monday combined with his $10,000 runner-up finish to earn him 30-grand in the final stops of his month-long road trip through the Midwest.

The 31-year-old Overton, meanwhile, didn’t have the juice to take advantage of his pole starting position.

“I just told them (his crew), I should’ve raced this car last night and then what we did last night tonight,” said Overton, who was the runner-up to Clanton in Monday’s 40-lapper. “We were a little tight last night and a little free tonight, but if we keep running up front the wins will come. We’re getting a little bit of our consistency.”