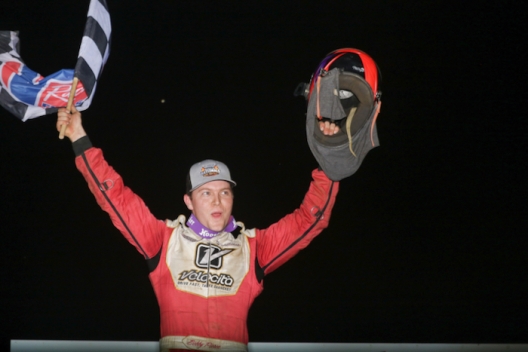 Three weeks to the night after Pierce overtook the race-long leading Unzicker at Peoria Speedway, the Oakwood, Ill., driver did it again at nearby Spoon River Speedway, going to the high side in the final laps to get around Unzicker and then winning a brief slide job duel to finish off his series-leading sixth victory of the season.

"I knew (the high side) was possibly going to be there," the fourth-starting Pierce said after notching his 33rd career series victory. "I ran this track a lot in Crate days and these guys make a great racetrack. It's one of the best tracks in Illinois. It's so fun. Tonight just showed how good of a racetrack it can be."

The outside front-row starting Unzicker, who worked long hours to repair his car damaged in a backstretch wreck in the previous night's series event at Knox County Fair Raceway, was left with a frustrating second-place finish after leading 34 of 40 laps, eight-tenths of a second behind the winner. Brandon Sheppard of New Berlin, Ill., was third in his family-owned No. B5 while Brian Shirley of Chatham, Ill., and Jason Feger of Bloomington, Ill., rounded out the top five.

Polesitter Garrett Alberson ran among the top three the first 15 laps but began to fade and retired after 23 laps.

Unzicker edged away from a tight battle with Alberson in the opening laps and controlled most of the race, but when Pierce moved to the high groove in the final 10 laps, his momentum carried him past the leader on lap 35. Unzicker briefly regained the lead with a slide job that Pierce answered on the other end of the track, and Pierce controlled the final few laps.

"Really, we had a good car. I don't think I was driving it right at some points in the race. Josh did a good job with the (signal) sticks there kind of showing me where some guys were and I was trying some different lines," Pierce said. "I couldn't quite do the line Ryan was doing, but we ended up finding a way around him that worked for me. Congrats to him for second, he ran a great race. ... what a win."

Unzicker, who led 31 of 40 laps at Peoria before settling for third behind Pierce and Shirley, fell shy of his first series victory of 2018 again.

"Again, Bobby did what he did. He's able to run the cushion better than anybody else," Unzicker said. "I was kind of looking for (Pierce's challenge) the whole time. He threw the late slider. He's just good. What do I gotta say?"

Unicker thought the top side "just looked too dirty to me up there" to run successfully, adding that "to have a good car and lose it with four to go just sucks."

The race was slowed by two cautions. The first for a lap-15 yellow when Paul Kuper spun in turn four and again on lap 28 when 10th-running Jordan Bauer spun in turn two.

Pierce credited remote help from his Hall of Fame father Bob Pierce, who underwent a successful outpatient bladder surgery and was watching from home, much like he did last season when a suspension prevented him from joining his son at the track.

"Gotta give a huge thanks to my guys. They worked their butts off today. Kyle and Josh, Jeff Leka here helping out. We were down a man with my dad having surgery, so shout out to all them watching, my dad, my mom, my girlfriend — I know they like the shoutouts. My dad told me earlier. ... It feels great to get this win.

"I have a tendency, I'm making phone calls to my dad, and when he's at home, and last time we had to do that, we won a lot of races, too. I guess it works good that way. He can was the DIRTVision all night and kind of give us some pointers on what to do. I wore the telephone out ... it's for sure a team effort. Having these guys work their butts off. We didn't tear up stuff like a lot of guys did last night, but we still worked like we did, for sure. We got this car rolling tonight. It feels really good."

Notes: Pierce's lone previous series victory at Spoon River came in 2017. ... His six victories have come in four states. ... Spoon River was the site of Ryan Unzicker's first series victory in 2010. ... Third-starting Brian Shirley slipped over the turn-two banking in the early laps and dropped to fifth and never contended. ... Unzicker had a full-second lead before the lap-15 caution and rebuilt his lead to one second by halfway. ... After the lap-28 caution, Pierce and Brandon Sheppard had a tight side-by-side duel for second before Pierce took up his charge on Unzicker. ... The feature ended before 9 p.m. as officials went into hurry-up mode with rain in the area.

Scattered thunderstorms threatened Spoon River late in the afternoon, but the skies brightened after one cell just missed the track to the north. Officials kept the show moving with rain still in the area and some drops of precipitation periodically falling during qualifying events; all prelims were completed by 8:20 p.m. CT and the 10-minute call to line up the Late Model feature was immediately given to teams. ... Brian Shirley’s night began in dismal fashion with a broken transmission during hot laps, but his Bob Cullen Motorsports crew made a quick tranny swap before qualifying and he went on to register the overall fastest lap in time trials and won the first heat. … Ryan Unzicker’s heat-race victory provided him a pick-me-up after the El Paso, Ill., driver and his crew logged long hours to repair the damage his car sustained in Tuesday’s massive feature wreck at Knox County Fair Raceway. He said his team worked late to begin the reconstruction process, caught about three hours of sleep and then returned to the machine. … Jason Feger arrived late to Spoon River, missing hot laps due to repairs he had to make to his MB Customs vehicle at his shop following Tuesday’s program at Knox County. … Thomas Hunziker returned to Summer Nationals action after skipping Tuesday’s show at Knox County to regroup. He ran into trouble in his heat race, however, when he spun to the inside of the homestretch on the opening circuit and his car’s nose was damaged. … Shannon Babb transferred to the feature through a B-main after a broken harmonic balancer in his primary car during qualifying forced him to pull out his backup Team Zero machine. The car change put him to the rear of the field for his heat.