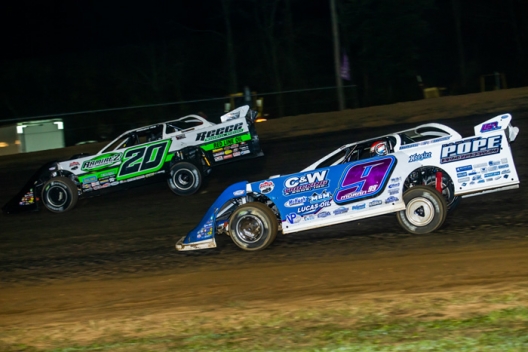 BROWNSTOWN, Ind. (Sept. 25) — Jimmy Owens went from seething to celebrating in the span of 24 hours.

Rebounding from from a physical on-track run-in with another driver that eliminated him from the previous night’s feature, the 49-year-old star from Newport, Tenn., outdueled Devin Moran of Dresden, Ohio, in a furious late-race battle to score a photo-finish victory in Saturday’s 42nd Jackson 100 at Brownstown Speedway.

“That was a blast,” Owens said of his dramatic $20,000 triumph, his second of 2021 on the Lucas Oil Late Model Dirt Series and the second of his career in the quarter-mile fairgrounds oval’s most prestigious Super Late Model event.

Owens, who went spinning out of contention for second place in Friday’s Night Before the Jackson A-main due to a tangle with Devin Gilpin of Columbus, Ind., roared back to lead all but five laps of the century grind off the pole position. But after racing alone at the front of the field for the majority of the distance, he had to withstand a stiff test from Moran to secure the checkered flag.

Moran, who was racing on his 27th birthday, was put on Owens’s rear bumper on lap 86 by the race’s lone caution flag and surged into the lead two circuits later. But Owens found a burst of speed around the outside of the track, regained command on lap 93 and survived a final-lap slider from Moran to beat the Buckeye State standout to the finish line by a mere 0.079 of a second.

Tanner English of Benton, Ky., who started 11th but lost several positions early in the feature and was still running ninth at the halfway mark, reached third on lap 89 and finished there. Earl Pearson Jr. of Jacksonville, Fla., climbed as his second midway through the race but settle for a fourth-place finish in his second week driving for Californian Jason Papich while Mike Marlar of Winfield, Tenn., completed the top five after running as high as third.

Owens powered his Ramirez Motorsports XR1 Rocket car to a lead of as much as 3 seconds during the race’s 86-lap run of uninterrupted green-flag racing, but after catching his breath he had to hold it again for virtually all the remaining distance. Moran made sure of it.

Seeking a victory in a race his Hall of Fame father Donnie never won, Moran’s Tye Twarog-owned Longhorn car grew stronger as the 100-lapper wore on. He had advanced just two positions from his seventh starting spot at the halfway point, but he surged to second by the 59th lap and began to slowly cut into Owens’s advantage.

When the caution flag finally flew on lap 86 — for Ricky Thornton Jr. of Chandler, Ariz., who spun in turn three after briefly losing a lap early in the race and then rallying all way to sixth place — Moran had pulled within just over 1 second of Owens. He proceeded to shoot by Owens for the lead on lap 88, putting the big prize squarely in his sights.

But Owens made something happen on the top of the bullring to burst back in front on lap 93. He never relinquished the position, but Moran dived to Owens’s inside through turns one and two on almost every remaining circuit.

Moran made one last bid on the final lap, sliding hard through to the inside of turns one and two and actually pulling ahead of Owens. But Owens executed a classic crossover maneuver down the backstretch to lurch back in front, then stayed low through turns three and four and beat Moran to the checkered flag by a scant margin.

“I thought I had him covered there (after assuming command on lap 93),” said Owens, who previously won the Jackson 100 in 2012. “I guess he slipped his tires a bit and I hit it just right through three and four and was able to roll on by him and I thought, I got this now. I was expecting him to get a little horned up and start spinning and stuff, but he kept it right under and gained back on me there.

“I didn’t know which way he was gonna be coming on me (on the final lap), whether it would be up or down low, because he had a really, really good car. It was fun racing with Devin; he gave me plenty of room I felt like. A couple of times, he scoots up, he wins the race, but he was respectful and gave me plenty of room like that and made it a heck of a show for the fans.

“It was just a heck of a race. I’d do that again in a heartbeat.”

Moran graciously congratulated Owens after the race, but he certainly wasn’t satisfied with his second runner-up finish in four career Jackson 100 feature starts. He previously placed second in 2019 to Hudson O’Neal of Martinsville, Ind.

“I know (Owens) had a frustrating night last night so I’m happy for him, but just bummed for myself,” said Moran, who also owns finishes of third (2015) and ninth (’20) in a race that his father never placed better than fourth (1993 and 2007). “I just want to win here so freakin’ bad. This (bridesmaid finish) has happened to me twice at this place.”

Moran felt that the lap-86 slowdown might have hampered his hopes for victory.

“I was reeling him in,” Moran said of his car’s speed before the caution flag. “I knew he was leading because I saw the (score)board over there. The last time I looked there was 16 laps left and I was kind of licking my chops a little bit because I felt like if I got up there and got by him real quick I could maneuver around them lapped cars and he looked like he was kind of running that one line.

“I really don’t think I wanted that caution at the end. My tires had heat in ‘em. Then after I got the lead I could hear Jimmy just gassing it, and I just kept missing the bottom of three and four so I just blame myself.

“I knew he was running kind of that diamond line,” he added of the final laps. “We got close a couple times and I’d just lose my front end, so … ah, man, I’m telling you, I’m just bummed. I feel like we’re so good here, I always run so good here …”

English, 28, never drew close enough to threaten the leaders down the stretch, but the driver of the Riggs Motorsports XR1 Rocket car felt he was still getting better.

“I’m so easy on stuff, I need to run a 150 laps instead of a hundred,” said English, who finished third in the Jackson 100 for the second consecutive year. “That right-rear tire was just coming in about the time the checker come out. I just needed a few more laps and I think we could’ve had something for ‘em.”

English’s biggest chore was grabbing third from the 49-year-old Pearson, who ceded the spot on lap 89 after his Longhorn Chassis lost traction following the restart.

“I think he’s like an older me,” English said of Pearson. “We run the same line, and I knew when I got to him it was gonna be hard to pass him. He was tough for sure. Just had to catch him when he slipped up there a little bit there.”

Notes: Owens recorded his 77th career win on the Lucas Oil Series. His only previous victory this season was a $5,000 score on Aug. 20 at Batesville Motor Speedway in Locust Grove, Ark. … Owens, who has six overall wins this season, was down on help for the weekend because his crewman, Cory Fostvedt, was home sick with Covid-19. … Eleven drivers were on the lead lap at the finish of the race, which took just over 32 minutes to complete. … The first three drivers a lap down at the checkered flag were big names: Lucas Oil Series points leader Tim McCreadie (12th), Thursday-night winner Brandon Sheppard (13th) and Friday-night victor Tyler Erb (14th). … Despite a subpar night, McCreadie left Brownstown with his advantage in the Lucas Oil standings sitting at a robust 340 points over Hudson O’Neal. … Thornton was the fastest car on the track when he reached sixth place just before spinning from contention on lap 86. … Jonathan Davenport, who missed the three-race weekend at Brownstown because he tested positive for Covid-19, fell from second to fourth in the points standings.