Information provided by: Series and track reports (last updated September 26, 8:06 am)
Before health hiatus, McDowell wins $7,500
King of the Mountain 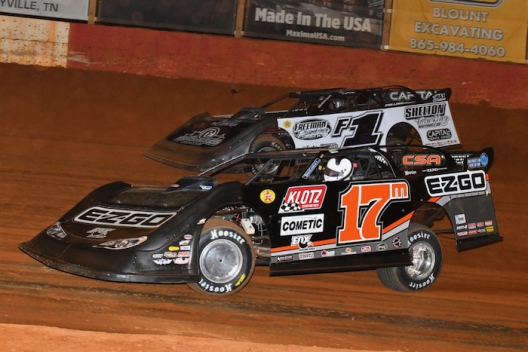 Michael Moats/mrmracing.net
Winner Dale McDowell (17m) and runner-up Payton Freeman (F1) battle for the lead.
What won the race: Winning what's expected to be his last start until mid-autumn, third-starting Dale McDowell of Chickamauga, Ga., took the lead with an inside pass on lap five and paced the final 35 circuits of Saturday's Southern All Star King of the Mountain feature at Smoky Mountain Speedway. He earned $7,500 in what he said is likely his last start until November because of unspecified "health issues" that will keep him out of action in October.
Quotable: "I've got some health issues. We're going to miss all of October," McDowell said in victory lane. "They'll do a press release I think next week on some stuff. It was good to win my last (race for a while), but I was looking forward to coming back here and going to some of those (upcoming) races. But without my health, I've gotta take care of that first, so I'm going to be out five, six weeks, and hopefully run there some in November. ... I wish we could come back. This car's really good. (Car owner and brother) Shane really needs to get somebody (to drive) this thing and race these races. I don't know what he's going to do. But anyway, a good night tonight."
Key notes: The victory is the 45th of McDowell's career with the Southern All Stars Series and his third career King of the Mountain feature win, after sweeping last year's doubleheader weekend. ... After leading laps one through four, Payton Freeman of Commerce, Ga., settled for the runner-up position, 2.003 seconds behind McDowell. ... Utilizing the final restart to take third place on lap 47, Eli Beets of Knoxville, Tenn., rounded-out the podium. ... Polesitter Ricky Weiss of Headingley, Manitoba, faded quickly in the opening laps before suffering mechanical problems while running fifth on lap 26, relegating him to finish 14th. ... Saturday's feature, the second of two planned series visits to Smoky Mountain, was slowed by two separate incidents and lasted 22 minutes, with seven competitors completing all 50 laps. … After Smoky Mountain, the Southern All Stars tour has three more races planned on its 2021 schedule.
On the move: Donald McIntosh of Dawsonville, Ga., started 17th and finished 10th.
Winner's sponsors: McIntosh’s Blount Motorsports Rocket Chassis has a Vic Hill Racing Engine and is sponsored by Stowers CAT, Massey Electric, Blount Excavating, Ole Ben Franklin Motors, Walker’s Truck Contractors and The Wine & Spirits Cellar.
Points chase: Before Smoky Mountain: 1. Payton Freeman (1,176); 2. Billy Franklin (814); 3. Mark Dodson (740); 4. Josh Putnam (622); 5. Sam Seawright (402).
Current weather: Scattered Clouds, 70°F
Car count: 22
Fast qualifier: Payton Freeman
Time: 15.703 seconds
Polesitter: Ricky Weiss
Next series race: October 23, Senoia Raceway (Senoia, GA) $10,000
Editor's note: Results and race details are unofficial.