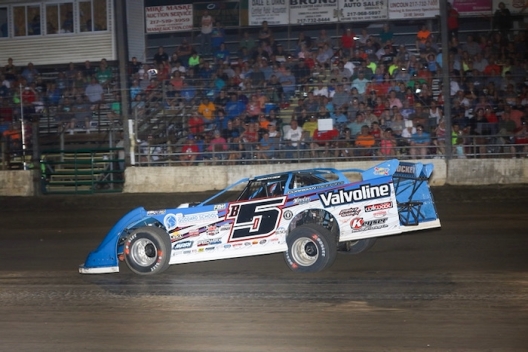 “Man, I’m wore out after that one,” the 28-year-old superstar from New Berlin, Ill., said battling his tight-handling family-owned XR1 Rocket car to pocket $5,000 for his second straight victory on the Hell Tour. “The cushion was big and I was fighting this thing, but we were able to get it done.”

Sheppard admitted that he needed a bit of luck, though, to secure his 26th career win on the grueling series. The A-main’s second starter was nearly 2 seconds behind leader Brian Shirley of Chatham, Ill., when the polesitter and race-long pacesetter pulled to the infield on lap 15 with rearend trouble — a sudden turn of events that propelled B-Shepp into the top spot for good.

While a caution flag on lap 32 put the red-hot Bobby Pierce of Oakwood, Ill., on Sheppard’s rear bumper for the final sprint, Sheppard staved off Pierce’s bids to beat the series points leader to the finish line by 1.386 seconds.

Jason Feger of Bloomington, Ill., settled for third place after ceding the runner-up spot to Pierce on lap 29. Tanner English of Benton, Ky., placed fourth and Frank Heckenast Jr. of Frankfort, Ill., was fifth after running as high as third during the race’s first half.

“I really wasn’t very good there, I didn’t feel like,” said Sheppard, who registered his first Summer Nationals victory of 2021 the previous night at Fayette County Speedway in Brownstown, Ill. “I was good in the middle at the beginning, but Brian was definitely better than I was. I hate to see that (misfortune) for him. I would’ve liked to for him to have been there at the end to see if we really could’ve raced.”

Sheppard’s biggest challenge once in command was negotiating the heavy lapped traffic that prevailed with the race running caution-free for laps 2-32. He managed to build a lead of over 3 seconds, however, before the feature was paused for the final time with eight laps remaining.

“It was definitely tricky tonight,” Sheppard said of the lapped traffic. “The racetrack was really slick up to the cushion, usually the way it is here. Luckily we were fortunate enough to get good runs off the top and be able to slide ‘em, and the lapped cars got a lot of respect so they lifted when they needed to.”

The caution flag that cleared the track in front of Sheppard didn’t let him relax, however. The 24-year-old Pierce, who won three straight Summer Nationals features before skipping Saturday’s event at Fayette County to attend his sister Ciara’s wedding, was up to second from the fifth starting spot and hungry for another victory.

“I seen the 32 was behind me after that caution so I knew I was gonna have to work for it,” said Sheppard, who tallied his record fifth Summer Nationals triumph at Lincoln, the quarter-mile oval that is the closest track to his home other than Jacksonville (Ill.) Raceway. “He’s been really tough.”

Pierce actually would have preferred for the race to run uninterrupted once he slipped past Feger for second on lap 29.

“I really didn’t need that caution,” Pierce said. “I kind of had some momentum built up, and the caution came out and let Brandon get clear ground again. He had the whole track.

“We had a terrible start to the night (with a subpar qualifying time), so how it happened, I’ll take second any day.”

The race was slowed by just two caution flags. Mitch McGrath stopped with smoke wafting from his car on lap two to draw the race’s first caution flag. The final run to the checkered flag was set up by a caution on lap 32 when Jake Little spun on the backstretch as Rusty Griffaw slowed to exit the track.

In the redraw among heat winners, Brian Shirley drew the pole with Brandon Sheppard alongside for the 40-lap feature. Frank Heckenast Jr. and Jason Feger will start in the second row as Illinois drivers swept the four heat races. ... Shirley hopes the pole is the place to be, but he's not entirely his confident is just right. "Sometimes you got through a week where things don't go your way," the Chatham, Ill., driver said, "then you go the next week and knock off two or three (victories)." ... Jeff Roth won the consolation race while two other leaders (Tucker Finch, in his first-ever series appearance, and Blaze Burwell) failed to transfer. Brent McKinnon got the second and final transfer spot. ... The series that has long created rivalries among drivers has one for 2021: Tanner English and Mitch McGrath. The front-row started in the third heat were docked for jumping starts in the third heat (eventually being moved to the second row), including once when English slid in front of McGrath and contact sent English into a 360-degree spin on the frontstretch. The two clashed again later in the heat when a spinning car in turn three drew a caution. English slowed on the backstretch but a charging McGrath ran into the right-rear corner of English's car and then briefly climbed the turn-three wall. Both managed to transfer to the feature, but both teams had work to do with English's team rebuilding the right-rear corner of the Riggs Motorsport No. 81E and McGrath making repairs and checking on a smoking condition in the final laps that he hopes was just oil on the headers. ... McGrath also made contact with Blaze Burwell in the third heat, triggering a four-car pileup between turns one and two. ... The three called back starts is certain to continue the conversation among series drivers about issues with getting heat races fairly started during recent events. ... Also in the third heat, Drake Troutman's car overheated and he pulled to the infield, hoping to douse the engine with water. He eventually got a push to the pits and the Hyndman, Pa., teen hopes the engine didn't suffer damage. "We hope (it's OK) ... we're going to check it out as soon as it cools down some." Troutman is also competing in the modified division. ... Jason Feger had a first-time occurrence in time trials: his foot slipped off the brake entering turn one. "You can't let that happen," said Feger, who qualifying poorly but rebounded with a third-heat victory. "It all worked out OK, I guess."