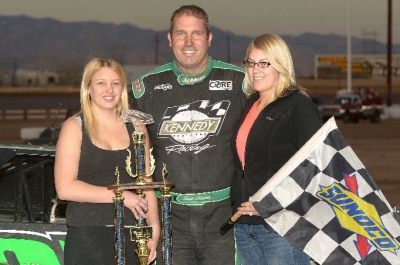 Shane Clanton picked up $10,000 for his victory in the Tucson finale. (photofinishphotos.com)

TUCSON, Ariz. (Jan. 20) — Shane Clanton was mired deep in the starting field most of the week at Tucson International Raceway’s Winter Extreme. He made the most of his chance to start up front in Sunday’s finale.

The 36-year-old Fayetteville, Ga., driver overtook Billy Moyer of Batesville, Ark., on the 34th lap and led the rest of the 50-lapper to collect a $10,000 payday at the 3/8-mile oval. Clanton’s victory from the third starting spot made him the week’s sixth winner as he posted his miniseries-leading fourth top-five finish of the week. | Complete Arizona coverage

“We definitely had a good car. ... we’ve been fast all week long,” said Clanton, the best finishing of three Capital Race Cars in the top five. “We just needed to start up front so we could race these guys.”

Moyer did his best to regain the lead from Clanton, trying to slide under him on two occasions in turns three and four, but Clanton held on to gain some redemption from a mechanical failure and bitter loss in Casa Grande, Ariz., two weeks earlier.

“Jonathan (Owenby), my crew guy there, he told me he closed in pretty fast. It’s treacherous running that top. I caught him and slid him over here (in turn four), and I guess (he) was trying to slide me that last couple of laps there. Billy Moyer, he’s pretty tough to pass.

“Lady Luck done got us at Casa Grande. We should’ve had (our first victory) before. But we broke a rear end there. I don’t know, we worked awful hard at getting our cars good, and I know somebody called me today and said if I won today, he’d buy a race car — so I think we got one more sold today.”

Moyer’s No. 21 shut down on the final lap when a five-cent ignition wire failed, allowing Morgan Bagley of Longview, Texas — who led laps 11-19 — to slip past for the second spot.

Pat Doar of New Richmond, Wis., who rallied from his 13th starting spot, nipped Moyer at the line for third while Clanton’s Kennedy Motorsports teammate Tim Fuller rounded out the top five in the Sunday afternoon affair. The front-row starting Moyer led the first 10 laps, regained the lead from Bagley on a lap-20 restart, then chased Clanton over the final 15 laps, making two serious bids between turns three and four that fell short.

Bagley, last year’s race winner, looked strong while leading the race, but when Moyer went past him on a lap-20 restart — followed by Clanton three laps later — he struggled to pick the right groove and took several laps to gather himself.

“I knew Billy took the top and I figured he was going to try and roll around the outside there, and he did,” Bagley said. “I think I moved up and probably should’ve just kind of held my ground there (in the low groove) ... I got a little too tight there, but we’ll take it and congratulations to Shane on a good run, and thanks to all the fans for coming out.”

Doar wasn’t a factor most of the race, but he made a late charge to nip Moyer at the checkers for the third spot. He and Fuller were in Capital cars, just like Clanton.

“I went better tonight. We finally drew not dead last, and the car was better. Capital Race Cars, I really like ‘em. I’ve gotta learn what to do to ‘em. (Gary) Winger did my shocks. I just didn’t wreck it, that’s all,” Doar said. “Who knows what’s going to happen the next time, but tonight it was fun, and that’s all you can ask for.”

Besides Simpson’s lap-44 flat tire, two other cautions slowed the action. Jason Papich ended up against the top of the frontstretch wall with heavy right-front damage on lap 19, but wasn’t injured. Clay Daly climbed the turn-four wall on lap 36, but his car returned to the track on all four wheels and the fence was repaired in just a few minutes.