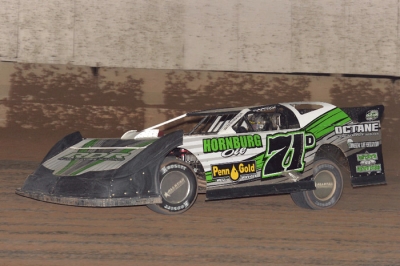 But Friday’s top feature finisher in a Capital car likely turned a few heads as Ron Davies of Warren, Pa., who debuted his new chassis seven days earlier in Tucson, posted a fourth-place finish after leading the first 10 laps at the 3/8-mile oval.

And even though Davies fell from contention in the 30-lapper won by Terry Phillips, the top-five performance was a satisfying run for the 54-year-old driver in his 38th year of dirt racing.

The old dog is learning a few new tricks with the Capital car, but racing is old hat for the long-time regular on the Stateline-Eriez circuit in western New York and Pennsylvania who long ago earned track titles at Lernerville Speedway in Sarver, Pa., and Raceway 7 in Conneaut, Ohio.

And while he’s nearing the end of his solid career — “I’m going to hang it up here pretty quick,” he said with a smile — Davies has raced more broadly in the last few years, including a run for the rookie title on the World of Outlaws tour in 2011.

The trip to Tucson continues that streak as he races closely with Clanton, the son-in-law who married his daughter Michelle last summer.

Racing with Clanton, Fuller — as well as another new Capital convertee, Pat Doar of New Richmond, Wis. — is fun for Davies, who owns and operates the oil- and gas-producing Weldbank Energy.

“We’re happy,” Davies said Friday night. “I wish we wouldn’t have started up front and lose a couple of spots, but we were going good until we got to lapped cars, and then I just got a push in my car and I couldn’t go anymore.”

Davies made the trip to Arizona primarily to shake down the recently built car, whipping it into shape before tackling Georgia-Florida Speedweeks next month.

“It’s going good. We’re real happy with everything,” Davies said of the four Capital drivers. “We’re all helping each other, and you know Gary Winger (of Integra Shocks) is helping us on our shock stuff, because each of us kind of need stuff that’s different. Because I drive different than everyone else does, and he’s trying to help us tailor our shock package to what we need, and we’re getting closer. Every night we’re gaining, so that’s a plus.

“Shane has run (Capital cars) a couple of years and Tim last year. Tim and Pat both told me it’ll take four or five races to get used to it, because it’s just way different. And it is. It’s a lot different to drive, but I’m starting to get the hang of it now. Hopefully, we’ve got two more nights to go, I’m real pleased with what we’ve done so far. We’ve made every (feature) and come out of a couple of consies from the back, so we’re making ground.”

Davies jumped out to a comfortable lead in Friday’s main event, but he struggled when he reached slower traffic and Phillips zipped past underneath him exiting turn four. Davies then fell behind runner-up Billy Moyer and then Wednesday’s winner Will Vaught before holding on to fourth — ahead of a charging Clanton, who started 22nd.

“I was messing around and couple get by those lapped cars,” Davies said. “I’d get beside ‘em and then I’d kind of just slide, and then they’d get back by me. And I’m like, ‘Someone’s gotta be coming, because I know I’m not very fast right now.’ And (Phillips) blowed right by me, and I’m like, ‘Ohhhh, there’s gotta be more coming now.’ Finally when I got cleared of ‘em, I could run with everybody.

“You just kind of slip-slide around like on ice and try to keep your momentum up so you can catch some traction some place. We’re real happy with the way everything’s going.”

Davies scaled back his racing four years ago while battling prostate cancer, which required a surgery that sidelined him for three months and kept him mostly away from racing for a full year.

“It was a pretty major hit, but right now I’m cancer-free, and it’s been four and a half — going on five — years now,” he said. “Things are good.”

And so he’s enjoying the tail end of his career, running occasional local shows to satisfy his sponsors but mostly traveling to big-purse events with the World of Outlaws. He hopes to mix it up with Clanton before he hangs up his helmet.

“I thought about that the other day. We never really got to race close together,” Davies said. But it nearly happened on Friday as Clanton charged to finish one spot back.