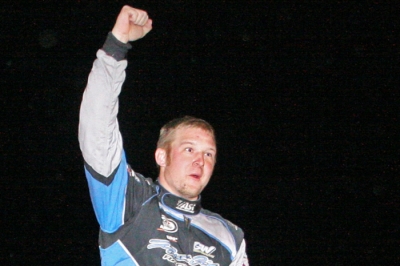 Will Vaught climbed atop his car to celebrate. (photosbyshana.net)

TUCSON, Ariz. (Jan. 16) — On a Wednesday night when an overwatered racetrack meant high-speed racing that tested man and machine, Will Vaught of Crane, Mo., came out on top in the third round of Tucson International Raceway’s six-race Winter Extreme. | Complete Arizona coverage

In victory lane, Vaught talked about the — ahem — testicular fortitude that helped him overtake Jimmy Mars with a strong late charge and daring crossover pass with fewer than three laps remaining.

“It takes a big motor and a lot of balls to win this deal,” the 26-year-old Vaught said.

Fans leaving the 3/8-mile oval will remember Vaught’s dazzling pass as race-long leader Jimmy Mars, his car’s right-front tire skidding because of problems with his car, on the 28th of 30 laps.

But the 42 drivers entered in the midweek program will remember the heavy track conditions that pushed the limits of powerplants, equipment and the muscles of drivers behind the wheel. A half-dozen drivers opted to take just a lap or two and park, saving their equipment for another day.

“That’s hard on us old guys,” said fourth-place finisher Terry Phillips, 46. “Hopefully that don’t happen anymore because I don’t know if my big ol’ head can stay on my shoulders.”

Added fifth-place finisher Justin Kay, who started on the front row with Mars: “It was a tough track to race, being this heavy and all that.”

Vaught knew he and the other 23 feature starters faced the challenge of handling brutally fast conditions as lap times crept below the 16-second mark throughout the night, but he wanted to bring home a victory for his team after a near-miss in Saturday’s opener.

“You just had to get up on the wheel,” he said. “I wanted it so bad for everybody here, and I made it happen.”

Ironically, Vaught’s team wasn’t using the equipment they’d have chosen for the conditions otherwise. The team hurt its biggest powerplant in Sunday’s action, and ended up using a smaller Clements Automotive piece Wednesday that performed admirably “but it had its tongue hanging out” at the conclusion of 30 laps, Vaught said.

And the team also fielded a Warrior Race Car that was designed primarily for use on slicker racetracks, when slower speeds and finesse take precedence over blazing speeds and brute force.

“We built this race for a slick racetrack, and we come out here and it’s track-record times,” Vaught said. “ We had to back up on our program a little bit and loosen this thing back up — we were tight in the heat race. And (Warrior’s) Sanford (Goddard) got to tuning on it, and we got ‘er right in the feature.”

Vaught didn’t mind the high speeds, but he realizes it doesn’t always make for the best competition.

“I love going fast. The faster it is, the better for me. I like going fast, but it usually takes the racing out of it,” he said, saying luck and a strong motor sometimes outweighs what the driver brings to the table.

“The racetrack was so fast and narrow, it’s hard to maneuver in that kind of deal. Being the lead is (a big) disadvantage,” Vaught said. "You don’t know how much lead you got, and when you catch them guys, you need to be patient at the same time. If he was running second, he’d probably have passed me, too.”

On a scary fast track, Vaught’s fearless charge made the difference against the faltering Mars. Scary fast? Not really.

“If you’re scared in a race car,” Vaught said, “you better quit racing.”