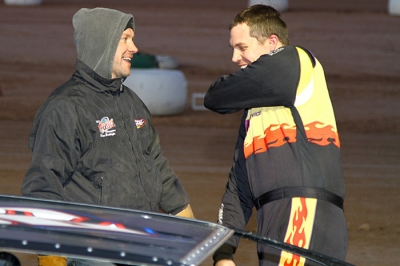 While Simpson was turning the steering wheel on his new No. 32 MB Customs car, the two-time World 100 winner Birkhofer was turning wrenches for Simpson at the desert track.

It was a combination that both Iowans found enjoyable as Simpson matched his richest career Dirt Late Model victory against a 50-car field that included Shane Clanton, Billy Moyer, Tim Fuller, Terry Phillips and other standout drivers.

The 29-year-old Simpson knew he had a fast car, but he wasn’t completely confident he could match Birkhofer’s driving abilities in a car they put together during the off-season.

"You know, Brian makes these cars look so good, but at times he struggles. I’m like, ‘Man, I think this is the right move because Brian’s so good at what he does and how he adjusts stuff and how good he’s been in the car,” Simpson said. “But I was like ‘I just don’t know if I’m as good as a driver as he is.’ ”

At least in leading 40 laps at the 3/8-mile Tucson oval, Simpson did his best impression of Birkhofer in racing to what he called the biggest victory of his career. The 40-year-old Birkhofer gave Simpson’s checkered flag performance a big thumbs-up.

“I’m standing up there giving him signals and trying to put my thoughts into his head through my arms,” said Birkhofer, who flew to Arizona for the weekend to lend a hand. “One time when he got in lapped traffic, I (was thinking) ‘Just have patience.' I mean, he’s won some races, but he hasn’t been in that position a lot in his life. He did a great job.”

Simpson had been piloting a Longhorn Chassis out of the North Carolina-based Bobby Labonte Racing shops, working closely with Labonte’s driver Earl Pearson Jr. and others for the fledgling chassis brand. But after Birkhofer gave Simpson a few tips on that car late last season, one thing led to another to put Simpson into an MB Customs car, a chassis co-designed by Birkhofer along with Jimmy and Chris Mars, the driver-crew chief brother combo from Menomonie, Wis.

Simpson appreciates the help he received from Pearson’s bunch — and he still has a Longhorn in his shop — but connecting with Birkhofer is difficult to pass up.

In Saturday’s opener, Simpson threatened up front before settling for fourth after jumping the cushion in turn four a few times. But he put it all together Sunday in outrunning Mars, who wasn’t too bummed about being beating by a fellow MB Customs driver.

“I want to win as much as I can, and I’m going to do what I can to win, but if I can’t, it feels pretty good to know that hard work back at the shop has paid off,” Mars said.

Birkhofer is proud, too.

“I just sat here and kind of tuned on the car like it was mine. I built the car like it was mine,” said Birkhofer, who won his second World 100 last September. “I put my heart and everything into these things, so I was just glad to see him run fourth last night. I told him it was my bad. I made a couple of (wrong) decisions last night, but he’s about 50 pounds heavier than me, so I’m having to (adjust) some stuff around for him a little bit.”

Added Simpson: “We just missed it a little bit last night and messed up on that restart and we were a little too tight in ... me and Brian talked about it all day what we could do, and he thought about it all last night.

“I’ll tell you what, it’s amazing to have him here. I probably wouldn’t be right here, right now, so I have to say thank you to him. I’m probably going to have to find a way to get him back out here next weekend, because he’s going home (Monday).”

Simpson’s hopeful his first two starts in the new car lead to bigger things in Arizona — four more races are scheduled for Wednesday and Friday-Sunday — and later in the season.

“We’re excited for the rest of the year, for the rest of the week,” he said. “I think we really have got a chance to win anything this week, and I’m sure when we get home, you know, I’m sure soft tires will be different, but hopefully Brian will be there to be able to help me out and get me straightened out, and we’ll head to Brownstown (Ind., Speedway) for the Lucas Oil race.”

Birkhofer, who also plans to race at Brownstown, will likely pit with his new protege.

“Tonight proved he can drive a lot like me,” Birkhofer said Sunday. “He ain’t going to be the fastest all the time, but it definitely shows how it ain’t the driver, it’s the race car a lot. He did a good job. When my cars are good, the cars are good.”

And being a stand-in crew chief, at least for one weekend, wasn’t too bad.

“It was a lot of fun. It was almost as fun as me driving the thing to a victory, really.”