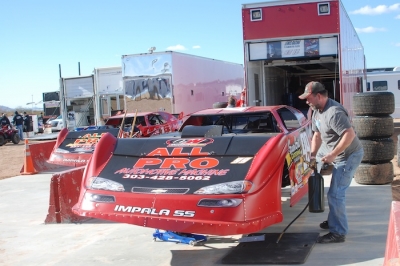 “There’ll probably be a lot of laughing and giggling,” Stovall said of the plans to build a wooden box atop the one-car trailer. “Whatever works.”

Stovall is among more than 40 Super Late Model drivers on hand for practice Friday at the 3/8-mile oval before Tucson's six-race miniseries begins. The six races are scheduled for Saturday, Sunday, Wednesday and Friday-Sunday next weekend with DirtonDirt.com providing a live pay-per-view of the Late Model and modified action.

Stovall’s team initially considered a trip to Florida Speedweeks, but things changed last week when he and Humphrey decided to combine a trip to pick up the new frame at Bakersfield, Calif.-based Victory Circle Chassis with some racing in Tucson.

“Why would we not go out here and race?” said Stovall, the Galena, Mo., driver who won last year’s MARS DIRTcar Series title.

California driver Rob Sanders hauled the frame to Tucson, arriving Friday afternoon, while Humphrey is en route from Nebraska with Stovall’s black No. 00 machine. Humphrey was delayed when he broke an axle near Dodge City, Kan., and likely won’t arrive until dawn Saturday, Stovall said, so his first action will come in the first race 3 p.m. (Mountain) Saturday.

Stovall, who made three starts last year at Tucson with a best finish of sixth, will race in Saturday’s $3,000-to-win event and Sunday’s $5,000-to-win event before the team heads to Home Depot to buy some wood to construction that trailer addition. It only has to be big enough to carry the frame, but it’ll be a challenge, Stovall said.

The Greg Junghans-owned Shop Quik Racing Team has had plenty of success in Arizona over the years, and drivers John Anderson and Chase Junghans will be looking for more in Tucson.

The 46-year-old Anderson, who owns four career January victories in Arizona, enters as the team’s veteran while the 20-year-old Junghans is beginning his first full season in Late Models.

In fact, Junghans, who has had most of his racing experience in modifieds, will be making just his 10th career Late Model start at Tucson on Saturday.

Can the No. 18 of Junghans, out of Manhattan, Kan., outrun the No. 2 of Anderson, who is from Omaha, Neb.? “Hopefully,” Junghans said with a smile. “That’s the gameplan.”

Then Junghans reconsidered his answer. “Actually I hope we run 1-2 — either way,” he said.

While he’s a Late Model newcomer, Junghans has the advantage of assisting Anderson as a teenager and working on the team’s full-fendered cars, so he’s “understanding how they work and all the fundamentals of the Late Model,” he said. “Just being around them helps.”

While Junghans made only nine Late Model starts in 2012, his fourth outing was a success. He notched a $2,000 National Championship Racing Association victory on July 3 at 81 Speedway near Wichita, Kan.

That victory came in a 2004 MasterSbilt, but Junghans will be debuting a brand new MasterSbilt at Tucson, where his best performance in a modified came in 2011 with a fourth-place finish.

As driver Troy Ruebke of Waddell, Ariz., sat in the cockpit of his Late Model in the pits early Friday evening, he considered an addition to his No. 2 that might make him a bit more comfortable.

"I need to put a heater in here," Ruebke joked, recognizing the unseasonably cold temperatures in Tucson for practice night at the Winter Extreme. The high temperature never hit 50 on Friday with the mercury set to drop into the 20s overnight.

While some of the Southern and Midwestern states that drivers came from were enjoying warmer temperatures than Tucson, crew members were bundling up to survive the cold before Friday evening's practice. Driver Rick Shafer of Vacaville, Calif., figured the car would stay warm during practice, but wasn't sure his modest trailer would protect the car as night fell.

"We're going to have to drain the water out and put anti-freeze in this thing," he said.

About 45 Late Models were in the pits as of 4 p.m. Friday afternoon; practice is scheduled for 6-10 p.m. ... Several more Late Models are expected for Saturday's action and other teams will likely join the racing through the next week. ... Modifieds and a few cars in other divisions are also practicing ... New Mexico teammates Dave Deetz and Garrett Alberson will miss Saturday’s race because they’re attending a seminar at MasterSbilt Race Cars in Crothersville, Ind.; they’re expected to compete beginning Sunday. ... Modified ace Rodney Sanders of Happy, Texas, will drive a Jason Krohn-owned Late Model; he’d hurt a powerplant last week in Casa Grande, Ariz., but he received a replacement Pro Power engine hauled to Arizona by Jimmy Mars. ... David Breazeale of Four Corners, Miss., who missed most of last season, returns to drive for Henderson Motorsports and is entered at Tucson along with team owner Leon Henderson. ... Modified ace Bumper Jones of Las Cruces, N.M., is piloting a Lewis Racing entry. Scott Lewis of Henderson, Colo., will drive the No. 99 and Jones will drive the 19j.