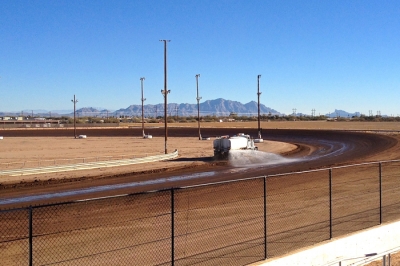 “I knew he would have trouble with the snow,” Fuller joked. “Of course he would. He’s from the South.”

While the delay caused Clanton to miss Friday’s practice, Fuller made good use of his time on the track, getting a head start on what he hopes turns out to be a profitably trip west. Fuller, who’s competing in Arizona for the first time, will spend Saturday and Sunday at Central Arizona for a pair of $3,000-to-win Wild West Shootout events before moving south to Tucson (Ariz.) International Raceway for the inaugural Winter Extreme six-race miniseries.

“It’s good to get out here and get the bugs out and actually getting back in the car and getting ready for Florida,” said Fuller, who’s kicking off his first full season with Kennedy Motorsports. “It’s our first time out here, but I think we’ll be pretty good against these guys.”

Of course, Fuller will have to contend with a stout field of the West’s top competitors along with other national invaders such as Billy Moyer and Jimmy Mars who have dominated early-season miniseries at both Central Arizona and Tucson in recent years.

“I know those guys like Moyer and Mars are tough out here, but anywhere your race these days everybody’s tough,” Fuller said. “We’ll do the best we can do. We’re doing some different stuff with some shocks just to try and learn some things, but I think we’ll be pretty good against anybody out here.”

Fuller isn’t guaranteeing any victories during his Arizona trip, but he’s definitely not ruling it out. That’s not surprising considering the confidence he has in his new team.

“It’s probably the most excited I’ve ever been to go into a season,” Fuller said. “I really haven’t been having fun racing for the past couple years. I’d say the end of 2010 was my last year really being competitive, so I’m looking forward to what we have going.”

Rodney Sanders, a modified standout from Happy, Texas, made his first laps behind the wheel of a Late Model Friday, driving a new car owned by fellow mod driver Jason Krohn of Slaton, Minn.

Sanders appeared to be among the quicker cars during Friday’s practice, but that doesn’t mean he’s getting his hopes up. He’s still just looking to get as much seat time as possible as him and Krohn plan to split time in the car at Central Arizona and Tucson and at other select events throughout the season.

“We’ll just have to wait and see what happens,” Sanders said. “There’s not really a whole lot of cars here from practice, so maybe there won’t be a whole lot. I really hope we can make the features and get that seat time.”

While he may have the odds against him in making his first laps in Late Model, Sanders at least has the help of his car builder and veteran driver Jimmy Mars of Menomonie, Wis.

“We’ve got Jimmy here and he’s helping us,” Sanders said. “That’s a big plus. I’ve never been around a Late Model before; tonight’s the first time I’ve ever even sat in one. It’s definitely good to have someone on your side that knows what’s going on and can help out.”

While he adjust to his new Capital Race Car, Pat Doar of New Richmond, Wis., knows he needs every lap he can to get accustomed to his new ride before the season gets rolling full steam. That’s why even when he was stuck behind a slower car on an extremely muddy racetrack during the first round of Friday’s practice session, he didn’t even consider pulling off the track.

“Just getting a few laps running around in the mud helps,” Doar said. “I drove all the way out here, I might as well get as many laps in as I can and get the feel of this thing.”

“I’m looking forward to it. It should be fun,” Doar said. “I think that being out on the road with them will help out. I know it can’t hurt.”

DirtonDirt.com will produce Saturday and Sunday's action live online. Click here to order your pay-per-view package. ... Jimmy Mars is at Central Arizona assisting other drivers but doesn’t plan to compete until Tucson. … Jason McBride of Carbondale, Ill., was en route to Arizona but turned around in New Mexico after a number of hauler issues. … Jim Whisler of Otis, Wis., is debuting a new Rocket Chassis in making his first Arizona trip since 2008. Whisler planned to only use the new car as a backup until racing closer to home later in the year, but the coolant in the engine of his primary car froze during the drive down. … Modified driver David Karst of Casper, Wyo., is competing in the Late Model division for the first time since 1996. … Don Shaw of Ham Lake, Minn., had both a Victory Circle by Moyer Race Car and a Bloomquist Race Car unloaded Friday night. He said he’ll likely use the Moyer car so he can pick the brain of his chassis supplier.