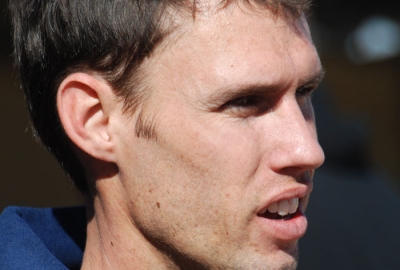 Young boys getting T-shirts autographed. Buddies dropping by to shake hands. And an elderly woman leaning in for a postrace hug. "We thought you were going to win," she said. Whitwell, a smile on his angular face, replied: "I kept getting second."

No one remembers who finishes second, the saying goes, but the home-state fans will at the Wild West Shootout, where an Arizona-based driver hadn't finished even in the top five since 2006.

Whitwell, 25, made five of six feature events, contended for the lead in three main events, and advanced at least nine positions in the other two races. The four-time modified champion at USA Raceway has quickly become Arizona's brightest Late Model star, and he plans to follow Tucson native Jeremy Payne's tire tracks and base his Jeff Sires-owned racing operation in Missouri later this year.

"We gave him the best equipment ... it's as good as it gets (and) he's done well," Sires said. "We took the modifieds, went to (Las) Cruces, traveled around a little bit, took the Late Models out. He's charged to the front each time."

Whitwell, whose Late Model career hadn't included Wild West Shootout starts until 2011, charged to the front even better than expected at the 3/8-mile USA Raceway oval where he's a master in the modified division.

"I didn't set too high of goals. I just wanted to make all the races — which I failed at that because I hit the wall the first night," Whitwell said. "But I was not expecting to finish that high up and be that competitive really. I knew I could probably run up front maybe in the top five a couple of nights, but I had no idea I'd be contending for a win that many times."

In the Jan. 9 feature, Whitwell briefly led Pat Doar down the backstretch before settling for second. On Jan. 12, he stalked Ray Moore half the race, then chased three-race winner and Hall of Famer Billy Moyer the rest of the way, nearly finding a way past. And in the Jan. 16 Bill Cheesbourg finale, Whitwell erased a straightaway lead by Terry Phillips and Moyer — without the aid of a caution — and nearly stunned two of the sport's best on the final lap, settling for second.

Whitwell was exhausted after running both his modified and Late Model most of the week, so the team regrouped and competed in the Late Model division only the last two events.

"I really came in focused today," Whitwell said early Sunday evening. "I knew my car was good, so I didn't really work on it that much. I worked mostly on tires and maintenance, and that was it. I didn't really mess with the setup a lot. It was good last night, I just didn't have good track position. I didn't make as many mistakes last night, so I was getting more confident in the car."

Whitwell's confidence was a little shakier early in the week. He tangled with Billy Moyer Jr. earlier in the week, unaware a groove-swapping move wasn't appreciated. And he apologized to Moyer's father after the midweek feature as he made contact amid traffic that nearly knocked both drivers out of the race.

On Sunday, Whitwell was certain to give drivers a wide berth as he made his way to the front from his eighth starting position. "I just wanted to make sure I gave everybody a lot of room," he said.

Halfway through the 40-lap feature, Tucson fans enjoyed a duel between 25-year-old homeboys as Whitwell and Payne battled for top-five positions.

"Did you have fun with Jeremy?" one fan asked after the race, remarking how they were both charging into the corners. "That's how we roll, man," Whitwell said with a smile.

Whitwell plans to head east later this season, running out of Steve Rushin's shop in Poplar Bluff, Mo., to compete on the MARS DIRTcar Series and other Late Model events in a region where there's many more opportunities to compete than in Arizona, which only offers a handful of races each season. Whitwell hopes his Wild West Shootout success carries through.

"I like racing this many times in a week," he said. "It just seems like I get better and better the longer I go. Now I'll take off for no telling how long and forget what I did."