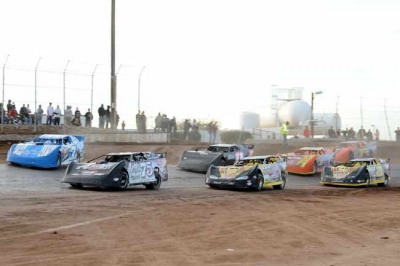 Ducking under Phillips in turn three and four on lap 39, Moyer edged ahead at the white flag and led the last lap to capture the Wild West Shootout finale at USA Raceway. The victory gave the 53-year-old Hall of Fame driver from Batesville, Ark., $10,000 and duplicated his three miniseries victories from last season.

"When I saw five (laps) to go, I was getting worried ... I knew I was running out of time. Everything just happened right with those lapped cars there," said Moyer, who also won Wednesday and Friday night events en route to a miniseries-best $18,500 in earnings. "It just turned out I was in the right place at the right time. When (Phillips) chose to go around that guy on the outside there, I was just set up to turn underneath 'em and it just all worked out good."

Phillips, the winningest driver in Wild West Shootout history, was not only shut out of victory lane in 2011, but the Springfield, Mo., driver but lost second when hometown standout R.C. Whitwell edged him at the checkers for his third runner-up finish of the week. Jimmy Mars of Menomonie, Wis., winner of last year's finale, advanced eight positions to finish fourth and Tucson native Jeremy Payne of Springfield, Mo., rounded out the top five.

While Phillips and Moyer were out front alone most of the race, Whitwell charged to the front from the low groove, making up a straightaway deficit after taking the third spot from Moyer Jr. on lap 22.

"I didn't feel like I was going anywhere" running the high groove early in the race, said Whitwell, who started eighth in a Jeff Sires-owned car. "I was behind Pat Doar, and I was like, 'This guy's not going to get off the top. What are you going to do? Follow him the whole race?' So I was like, I'll just try the bottom.

"Once I got in the clear track where I could run by myself, it seemed like I ran down the leaders ... I was really excited and my car felt great."

Phillips, whose last Wild West Shootout came last season when he overtook Moyer on the last lap, was frustrated with the lapped traffic that hampered his progress late in the race.

"That's racing. I chose the wrong line on the last lap, and it cost me. I need to do a better job," said Phillips, who saw Moyer's No. 21 on the scoreboard just behind his No. 75. "I knew he'd be hard to outrun. We had a lot of fun there. We've raced a lot together and I respect him a lot, and I know I can race with him, that's no problem there. It's just the ol' lapped cars, I guess."

At the outset of a race that started on a slick track before sundown, Phillips jumped into the lead on the high side with Moyer and outside front-row starter Mike Johnson giving chase. Phillips and Moyer pulled far ahead after 10 laps and Saturday's winner Bub McCool pulled to the infield before the lone stoppage on lap 15 for a grinding turn-three crash.

Dylan Smith's car slammed the turn-three wall driver's side first after contact from Ronny Lee Hollingsworth, then collected Frank Heckenast Jr. before rolling onto its roof and spinning like a top. Smith's upside-down car came to a rest pancaked in the middle of the track while Heckenast's heavily damaged car sat backwards with its left-side wheels perched on the concrete wall. The red flag appeared for the cleanup and while Smith complained of a sore neck, neither driver was seriously injured.

Phillips and Moyer went back to work on the restart with Billy Moyer Jr. moving up to third. Johnson got hung up on the backstretch on lap 17 and faded from contention while Whitwell broke into the top five for the first time.

The Phillips-Moyer battle continued on the high side out front while Whitwell and Payne dropped Moyer Jr. to fifth on lap 22. From that point on, Whitwell steadily made up ground on the leaders and caught them with less than 10 laps remaining.

Phillips got a little breathing room on lap 35, but the looming traffic played to Moyer's favor in the final laps while Whitwell sat poised behind the frontrunners.

Moyer turned back the clock in 2011 with a 24-victory season, and he's off to another strong start with three victories and the season's first $10,000 payday.

"That's what it's about, I guess, getting the last one. Everybody shoots for the last one, and that's the one that helps pay the bills. It makes the ride home a lot better," said Moyer, who pondered his chances of another stellar season in the twilight of his career. "If we could do that again, that'd be sweet, but I think the odds are stacked up against us. To have another year like we had last year would be phenomenal for sure, but we're not saying we can't."

Notes: Moyer's Victory Circle Chassis has a Clements Racing Engine and sponsorship from L&D Trucking, Henderson Motorsports, Banner Valley Hauling and Minx Show Palace. ... Moyer carried a foam mudplug to victory. It rested against the cockpit bar over his left shoulder the last part of the race after flying off the racing surface. "It flew up over and landed right on my windshield bars," Moyer said. "I grabbed it with my hand and tried to throw it out the side of the car, and I didn't even know it caught on the side until after the race there." ... Runner-up R.C. Whitwell's left-rear rim was bent by late-race contact with a lapped car. ... Ronny Lee Hollingsworth pulled to the infield on the 28th lap. ... Matt Aukland drove the late stages of the race with a broken left-front wheel. ... Brad Looney, who started 11th, was up to sixth early but he clipped the turn-four wall on the 14th lap and lost several positions; he recovered to finish seventh.

Chris Wall jumped out to a big lead and was never challenged in grabbing a victory. Polesitter Jason Papich ran second all the way to transfer to his first feature while Nick Bartels and Mark Carrell got the final transfer spots.

Fourth-starting Frank Heckenast Jr. edged under race-long leader Mike Balcaen on the sixth lap and led the rest of the 12-lapper. Fifth-starting Ronny Lee Hollingsworth struggled early in the race, but he came alive on a mid-race restart and raced to a runner-up finish. Seventh-starting Matt Aukland worked past fellow NLRA runner Mike Balcaen to finish third, while Balcaen barely held off Morgan Bagley at the checkers for the final transfer spot. The first of two cautions appeared on the seventh lap when Brant Kehrer slid into an infield tire barrier. Jon Kirby got into the frontstretch wall on the ninth lap, damaging his right-front suspension.

Inheriting the lead when outside front-row starter Nick Lyons got into the turn-three wall, sixth-starting Ray Moore led the rest of the way to capture the 12-lapper. Moore got a great jump and was in a three-wide battle for the lead on the first lap, then followed Lyons until his demise on the sixth lap. Polesitter Dick Barton finished second with seventh-starting Rob Sanders and third-starting John Kaanta getting the final transfer spots. David Karst was fifth after his late high-side charge fell short.

Rebounding from a disappointing finish the previous night, sixth-starting Mike Johnson roared around polesitter Mike Balcaen on the backstretch of the seventh lap and raced to vicotry in the eight-lap heat. Johnson, who lost a top-five finish on the last-lap chaos of Saturday's feature, outdistanced Balcaen while eighth-starting Pat Doar rallied to finish third. Outside front-row starter Eric Mass, who led the first lap, nearly had a disastrous encounter with the backstretch wall midway through the race, but he survived to finish fourth ahead of Morgan Bagley.

Fifth-starting Billy Moyer Jr. swept around the outside of polesitter Nick Lyons on the fifth lap and led the rest of the way. Moyer won by a straightaway over Lyons while Russ Sell was third after pressuring Lyons for position most of the way. The lone caution appeared on the sixth lap when David Breazeale, who banged together with Lyons the previous lap, shredded a left-rear tire.

Fourth-starting Billy Moyer slid under everyone down the backstretch and took lead in turn three on the first lap, then cruised to an eight-lap victory. Third-starting Karl Tipton survived a second-lap brush with polesitter Rob Mayea and ran second most of the way, but he faded badly in the final laps. Fifth-starting Jesse Stovall moved up to finish second, just ahead of seventh-starting R.C. Whitwell in the caution-free prelim. Mayea faded to finish sixth.

Continuing his domination of heat races, Brad Looney led all the way from outside the front row for his fifth heat victory in six miniseries programs. Looney had a straightaway lead at halfway and continued to pull away from polesitter Jason Papich, who finished second. Dick Barton was a close third and Nick Bartels fourth.

Dylan Smith broke away from an early battle with fellow front-row starter Rob Sanders and raced to a victory. Seventh-starting Terry Phillips took the second spot from Sanders on the sixth lap, then fought off Jimmy Mars to get the second spot. Mars was third and Frank Heckenast Jr., who survived a bump against the turn-three wall early in the race, recovered to finish fourth ahead of Sanders.

Last year's winner Jimmy Mars of Menomonie, Wis., is among 49 entrants for the last event of Arizona's winter classic. The week's winners are also entered: Billy Moyer Jr. of Batesville, Ark.; Pat Doar of New Richmond, Wis.; two-time Billy Moyer of Batesville; and Bub McCool of Vicksburg, Miss., who survived a last-lap tangle with race-long leader Ronny Lee Hollingsworth to capture Saturday's main event. ... The 40-lap finale honors Cheesbourg, the late Tucson driver who made six starts in the Indianapolis 500 from 1957-65. ... Two new drivers are in action Sunday in cars that have previously race at Tucson. Two-time WISSOTA Late Model champion David Karst of Caspar, Wyo., is piloting Jess Anderson's No. H20 and Nick Lyons of Centralia, Mo., is driving the No. 92 previously driven by Brant Kehrer (Kehrer is moving to the No. 00 driven last year in Tucson by Randy Korte, who missed most of the 2010 season because of back problems). ... Seven drivers have made all five feature lineups: Bub McCool, Ronny Lee Hollingsworth, Billy Moyer, Brad Looney, Jeremy Payne, Pat Doar and Jesse Stovall. ... Moyer tops the earnings chart with $8,500 while Doar has $7,400. ... Moyer and McCool are tied with four top-five finishes apiece. ... Hollingsworth is fielding a Victory Circle Chassis after destroying his MasterSbilt Race Car at the conclusion of Saturday's feature.