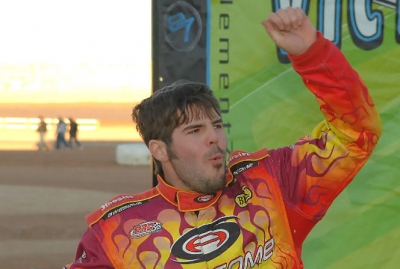 "I don't think anybody would've picked me to win one of these," the 23-year-old Batesville, Ark., driver said with a toothy smile.

Moyer Jr.'s third-place finish in last year's Tucson finale gave a hint to the talent he continued to develop throughout 2010, and the younger Moyer kicked off the 2011 season right with a dominating victory in the unsanctioned winter miniseries.

"It's definitely my biggest win," said Moyer, who took the lead from race-long leader and native son Jeremy Payne on a lap-20 restart and built more than a straightaway lead on the field. Payne, who discovered engine problems that left him one cylinder shy of eight, settled for second while Mars was third and the elder Moyer finished sixth.

The younger Moyer has had richer victories, but he ranks this $3,000 triumph high because he outran Mars and his father, two of Dirt Late Model racing's best.

"To beat them is awesome, especially lining up on that (lap-20) restart besides Mars," the winner said. "It's so cool to outrun those guys. Not to go gloating or (put it in their) face or nothing. Just to beat 'em — they've beaten me a lot, so to finally get them ..."

And Moyer did more than just outrun them. He was threatening to win by a half-track margin before crew members urged him to take it easy and conserve his big lead.

"It's always cool to win a slice-and-dice deal, a last-lap thing, but to win by over a straightaway, and when you see my dad and Mars behind me, it's awesome," Moyer Jr. said.

Payne, a Tucson native who races out of the Springfield, Mo., shop of Phillips, appeared to be on his way to his first-ever Late Model victory in his home state before knocking a push rod out of his car's engine midway through the race.

"I didn't notice it until a couple of laps before that (lap-20) caution there. I had good oil pressure and fuel pressure and everything, so I just kind of was watching my gauges. But on that restart, it wouldn't quite take off, so I was just happy to salvage a second-place finish," the 25-year-old Payne said. "I knew something was wrong ... I was just being careful and watching my gauges, and making sure I didn't hurt it too bad. ... I thought it was maybe something as simple as a fouled plug but it's a little bit worse than that."

Payne edged past polesitter Brad Looney completing the first lap to take command, and stretched his margin while Looney, Frank Heckenast Jr., and the third-starting Moyer Jr. gave chase early in the high groove. The low-running Ronny Lee Hollingsworth, who started 11th, dropped Moyer to fifth before the first caution on the 12th lap.

But Moyer came alive on the restart as Hollingsworth was shuffled back. He took spots from Heckenast and Looney on the 14th lap and began tracking down Payne's No. 74.

"We got right to second on that restart ... and I knew I was with Payne. I knew I was better than him, but I knew I had to pass him — that's two different things," said the winner, who blew past Payne on the final restart with 10 laps remaining. "We just had the car right. I rotated right around the bottom, and like I said, this car is awesome."

Behind Payne and Mars, of Menomonie, Wis., was Bub McCool of Vicksburg, Miss. Hollingsworth slipped out of contention but rallied back to finish fifth.

The feature was slowed by two cautions, neither for serious incidents. Fifth-starting Dick Barton got into the backstretch wall, climbing it with his right-side wheels on the 12th lap. He pulled to the infield with a flat right-rear tire. Rob Mayea slowed to bring out a lap-20 yellow.

The second round of the six-race Arizona miniseries is scheduled for 1 p.m. Sunday with $5,000 going to the winner of the afternoon's main event.

Notes: The winner's Victory Circle Chassis is sponsored by Imperial Motors, Banner Valley Hauling and Henderson Motorsports. ... Moyer Jr. was driving a car with 100 races on it, aged by most standards. ... Four of the top six finishers were piloting Victory Circle cars. ... Frank Heckenast Jr. of Orland Park, Ill., ran a strong third early in the race while debuting his Rocket Chassis; he faded to finish seventh. ... Polesitter Brad Looney fell off the pace midway through the race and pulled to the infield on lap 19 along with Jack Sullivan. ... Mike Balcaen and Nick Bartels got hung up during the lap-20 caution with Balcaen's right front climbing the left rear of the Bartels machine. Both were sent to the tail for the restart. ... Fourteen of 24 starters were running at the finish.

Polesitter Ray Moore raced to victory in the final consolation, transferring to the main event along with Jack Sullivan, Pat Doar and Rob Sanders.

Polesitter Jesse Stovall cruised to a 12-lap victory to transfer to the main event along with John Kaanta, Mike Johnson and Joey Moriarty, who worked to fourth from back in the pack. Arizona standout Lonnie Parker Jr. tried to get by Moriarty with a high-side move on the final lap but slipped back to sixth behind R.C. Whitwell.

John Lowrey broke away from a mid-race duel with Matt Aukland and cruised to a 12-lap victory. Mike Balcaen was second followed by Rob Mayea. Aukland was fourth for the final transfer spot.

Brad Looney is scheduled to start on the pole inside Tucson native Jeremy Payne for the 30-lap feature. The six heat winners and six drivers who topped passing points were locked into the main event, with the top eight redrawing to set the first four rows of the main event.

Polesitter Billy Moyer, a three-time winner at last year's Wild West Shootout, cruised to an easy eight-lap victory, matching his son's triumph in the first heat. Fourth-starting Pat Doar (running low) took the second spot from Californian Mike Johnson (running high) midway through the race, but it was too late to track down Moyer. Tail-starting Frank Heckenast Jr. used the high groove on the final restart to take second from Doar while Johnson settled for fourth. Jimmy Jelvik spun between turns three and four on the fifth lap to draw the lone yellow.

Polesitter Ronny Lee Hollingsworth eased away from fellow front-row starter Ray Moore and cruised to victory in the fifth heat. Moore ran second all the way in the eight-lapper while tail-starting Jimmy Mars got to third halfway through the race and had no chance to chasing down the frontrunners. Mike McCaughan edged Bill Bartels for the fourth spot.

Third-starting Nick Bartels got by polesitter Brant Kehrer after one lap and grabbed an eight-lap victory. Tony Toste started second and held that spot most of the way, but he fell back on the final restart as seventh-starting Bub McCool roared to the runner-up spot. Chris Wall was third followed by fellow third-row starter Jack Sullivan. The race's lone caution appeared on the seventh lap for R.C. Whitwell, who was running back in the pack when he got into the backstretch concrete.

Taking advantage when polesitter Clay Daly slipped off turn four at the outset, front-row starter Brad Looney took command and led all eight laps. Daly and Jesse Stovall turned up the heat on Looney in the final laps, but he held on for the victory. Stovall got second while Daly was third, far ahead of fourth-place finisher Matt Aukland. It appeared New Mexico's Garrett Alberson had something for Looney midway through the race, but he got into the backstretch on the fifth lap, drawing the race's lone yellow.

Tucson native Jeremy Payne swept into the early lead from his fourth starting spot, then fought off a late charge from fifth-starting Dick Barton for an eight-lap victory. Barton, the first New York driver to compete in the Arizona miniseries, made a high-side charge and nearly slipped by Payne, who drove a wide car to slow Barton's momentum. Barton's Kennedy Motorsports teammate John Lobb swept by polesitter Karl Tipton at the checkers to grab third. Oregon driver Russ Sell spun in turn one on the third lap to draw the prelim's lone caution.

Billy Moyer Jr., strong in last year's finale at Tucson, kept things rolling by dominating the first heat race. He crossed the finish line nearly a straightaway ahead of California driver John Lowrey, who was another straightaway ahead of third-place finisher John Kaanta. Mike Balcaen got fourth, fending off last-lap challenges from Eric Mass and Dylan Smith in the caution-free affair. Winningest Wild West Shootout driver Terry Phillips started and finished on the tail.

The night's $3,000-to-win purse is up for grabs as drivers from 17 states and Canada. ... Six heat races will transfer drivers into the night's 30-lap feature event at the 3/8-mile oval, where sunny skies and temperatures in the upper 50s have greeted drivers coming from colder climes. ... Among the 49 entrants are Hall of Famer Billy Moyer of Batesville, Ark., a three-time winner during last year's events at USA Raceway, and Jimmy Mars of Menomonie, Wis., a two-time winner last year and $10,000 winner of last year's miniseries-ending Bill Cheesbourg Memorial. ... To set up the feature lineup, the track is employing a passing-points system that transfers the six heat race winners and the next six best drivers in passing points. Those drivers will fill the first six rows of the main event with the rest of the 24-car field set by consolation races. ... Besides Late Models, 45 modifieds and 10 super stocks are in action. ... Among drivers in the modified division who frequently race Late Models are North Dakota's Cody Skytland, Arizona's R.C. Whitwell and Minnesota's Don Shaw. ... Whitwell and Darryn Waldo of Billings, Mont., are competing in both divisions. ... John Kaanta of Elk Mound, Wis., is driving the second Late Model of North Dakota driver Paul Mueller.