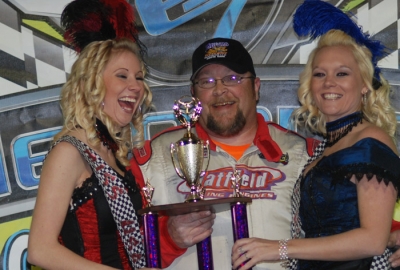 TUCSON, Ariz. (Jan. 13) — Racing past Billy Moyer to regain the lead on the last lap, Terry Phillips notched his miniseries-leading ninth victory Wednesday in the thrilling third round of the Wild West Shootout at USA Raceway.

The third-starting Phillips stole the lead from Chris Shannon of Merced, Calif., on the 17th lap, and the seventh-starting Moyer followed to take the second spot and began chasing Phillips. Turning up the heat with five laps remaining, Moyer grabbed the lead heading to the white flag and was in control exiting turn two on the final lap.

But Phillips summoned a final charge on the backstretch, going under Moyer in turn three to regain the lead and win the race to the checkered flag on a cool night in front of a light crowd.

"I went in on the last lap and went into (turn) one and missed my line. I thought, 'I just threw it away,' " Phillips said. "I got back to the brown and got a good run down the back straightaway and had to drive her off in there."

Moyer took exception to the aggressive move, saying he was forced to check up to avoid contact.

"He wanted it way worse than I did for $3,000, that's for sure," the Hall of Famer said. "If I wouldn't have gotten on the brakes, I'd have been out here on the parking lot somewhere."

Phillips said he made a clean move for the victory.

"I'm sure if he'd had a run underneath me, he'd have done the same thing. I don't think I drove him dirty or nothing, I just drove it off in there and cut the corner basically. They said we cleared him by quite a bit," Phillips said. "I was wanting it real bad. He was right about that. He always wants it to. He's a helluva racer. He's one of my heroes. Every once in a while when I get to beat him, it really makes a good night for me."

Phillips, of Springfield, Mo., earned $3,000 while Moyer, the Sunday night winner from Batesville, Ark., settled for second. First-night winner Jimmy Mars of Menomonie, Wis. came from 13th to finish third while Shannon limped home fourth after breaking his right-front suspension on the final lap. Jack Sullivan of Greenbrier, Ark., was fifth and Rylan Long of Greenfield, Mo., started outside the front row and finished sixth.

Two cautions slowed the 30-lapper, both in the first three laps. Will Vaught's turn-two spin on the first lap required a fresh start and on the third lap, Vaught was part of a turn-one scramble that included Bo Gordon, Mark Carrell, Brad Looney and Paul Mueller.

After taking Thursday off, three straight nights of racing wrap up the remainder of the Wild West Shootout with $3,000-to-win events set for Friday and Saturday and the $10,000-to-win Bill Cheesebourg Memorial on Sunday.

Notes: Phillips drives a GRT Race Car with a Hatfield Racing Engine and sponsorship from Andy's Frozen Custard and Don Babb Motorsports. ... Don Shaw, who drove Joe Johnson's No. 22 the first two nights, switched to Brad Seng's No. 12 for Wednesday's action; he dropped out of the feature early ... In the fifth heat, Ronnie Rihn of Bloomer, Wis., got out of shape in turn one after contact with other cars and bounded over the concrete wall, taking a rough ride before the car climbed back down onto the track and came to a rest on its left-side wheels. He was uninjured. ... Eric Turner, in the John Sires-owned No. 02, broke in the first heat and scratched for the night.