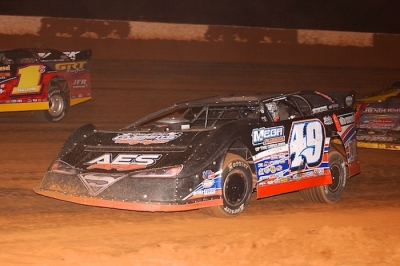 MERIDIAN, Miss. (Oct. 22) — Jonathan Davenport’s first impression of Whynot Motorsports Park wasn’t very promising. In fact, he was so disappointed with his performance during Thursday night’s Coors Light Fall Classic practice session at the quarter-mile oval that he was ready to head home.

"Thursday night I was ready to give it up," Davenport said. "We was scratching our head and couldn’t figure out what to do."

But Davenport of Blairsville, Ga., and his Barry Wright Race Cars house car team decided to stick around for the weekend’s race, and it paid off in the form of a $15,000 victory in the unsanctioned special event. | Slideshow | Notebook | Video | Prelims

After starting ninth in Saturday night’s Fall Classic main event, Davenport made his way through a quagmire of two- and three-wide racing during the first half of the 100-lap race and took the lead from polesitter Mike Marlar of Winfield, Tenn., on lap 55. Davenport later held off a late charge from 11th-starting Dennis Erb Jr. of Carpentersville, Ill., on his way to scoring the victory.

“We started the weekend off terrible, but we kept working at it and finally got it figured out,” Davenport said. “When you gotta work for it like that, it makes winning even sweeter.”

The victory continues a recent hot streak for Davenport that now includes four victories in less than a month after he and his team debuted a new race car. After struggling for much of the season, the strong performance of the new car is a welcome change for a driver who was among the sport’s winningest drivers in 2010.

“We put our heads together on this new car here and done a little bit different stuff here and there,” Davenport said of the car that he and Hall of Fame chassis builder Barry Wright put together. “It had been a frustrating year for us there for a while, but now it feels like we’re maybe getting back to where we were for so long last year.”

The victory didn’t come easy for Davenport. His lap-55 move by Marlar for the lead was one of 12 lead changes in a race that for the first 50 laps saw position changes among the top five on nearly every circuit. Four drivers took turns leading the pack around the multi-grooved racing surface before Davenport finally took control.

Once Davenport got out front the excitement still wasn’t over. A hard-charging Erb applied just enough pressure to keep things interesting throughout the second half of the race, and he turned up the wick as the two drivers raced through traffic in the final 10 laps. Twice Erb pulled alongside Davenport, but Davenport turned back each challenge and eased away slightly once he got to clear racetrack with just a couple laps remaining.

“I seen his nose that one time there. I was just a little too tight to run the bottom,” Davenport said of the battle with Erb. “You’re always worried when you see somebody’s nose there. And he started back behind me, so I knew he had to be awful good to come up through there.”

Erb was good, but not good enough. He settled for the runner-up finish with defending race winner Brian Birkhofer of Muscatine, Iowa, not far behind in third. Jared Landers of Batesville, Ark., rallied from the 14th starting position to finish fourth while Marlar held on for fifth.

Erb, who was making his second appearance at Whynot, was happy with his runner-up effort, but felt that he missed out on a chance to take the lead when he pulled even with Davenport on lap 90.

“When I got up underneath him coming out of (turn) two there I think I should just drove a little hard down the backchute and probably could have got by him right there,” Erb said. “But it’s still a good run for us. We just kinda worked our way up. We had a real good car. We got up there and caught him, just came up a little short.”

Gunning for his third Fall Classic victory, the third-starting Birkhofer faded out of top five early in the race, but closed in on both Erb and Davenport as the two leaders battled late in the race. But even though he was able to gain some ground, Birkhofer said he never really thought he was fast enough to contend for the win.

“I really wasn’t very good. I was just trying to reel them in when they got to battling there late,” Birkhofer said. “I was messed up from the get-go. I felt it on about lap five. What I done different (on the setup) was just not getting it done. I was fading pretty bad, but just hung in there and picked up some spots when everything got crazy on some of those restarts.”

Besides Davenport and Marlar, Klint Byars, Bub McCool and Jack Sullivan were the other three drivers to spend time out front. Byars, the 2011 Mississippi State Championship Challenge Series Champion who won three special events this year at Whynot, jumped to the early lead from his outside-front-row starting position. He then began to pull away early, but suspension issues caused him to fade badly around lap five. He ended up ninth.

McCool of Vicksburg, Miss., made multiple appearances at the front. He first took over from the fading Byars on lap eight. McCool then swapped the lead five times with Marlar in a back-and-forth battle that lasted until the race’s first caution appeared for a spin by Chris Wall of Springfield, La., on lap 34.

Sixth-starting Jack Sullivan of Greenbrier, Ark., was next to enter the mix, powering his GRT Race Cars house car by Marlar on the restart. He then chased down McCool and initiated a side-by-side battle for the lead that lasted nearly five laps. Sullivan inched ahead of McCool at the line to lead lap 40, but McCool battled back to lead lap 41. Sullivan finally cleared McCool on lap 42 and was out front when another caution waved on lap 44.

Sullivan, McCool and Marlar went three-wide for the lead on the ensuing restart, with Marlar retaking the spot as Sullivan began to fade and eventually dropped to 13th at the finish. McCool was next to fade after a lap-51 restart allowed Davenport and Erb to move by. McCool eventually pitted under the race’s final caution on lap 70 and ended up 15th.

Notes: Davenport's Barry Wright Race Cars house car is sponsored by Mega Plumbing, En Compass Solutions, Elite Concrete, Baird Transports, Nicholls Plumbing and JRI Shocks. ... The race was slowed by six cautions; five were caused by single-car accidents, while the other was for debris. ... Davenport’s other victories since debuting the new car include a pair of $10,000 victories and a $5,000 victory. ... Marlar’s fifth-place effort is his third top-five in as many Fall Classic starts. ... Entering just his second race of the season, Scott Slay of Clinton, Miss., made the show in David Breazeale’s backup car, but had trouble on his way to a 22nd-place finish. ... Landers was aided in his fourth-place finish by crew chief Randall Edwards, who normally turns wrenches for World of Outlaws Late Model Series regular Darrell Lanigan of Union, Ky. ... Many of the drivers who competed at Whynot will entire another $15,000-to-win Mississippi event next weekend in the eighth annual Southern Belle Cotton Pickin’ 100 at Magnolia Motor Speedway in Columbus.