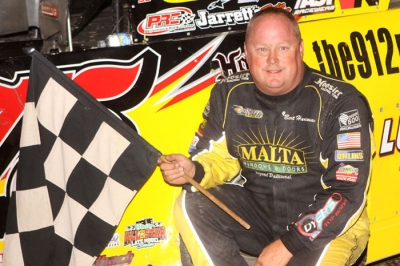 IMPERIAL, Pa. (Sept. 19) — Fresh off his World 100 victory the previous weekend, Bart Hartman staked his claim as the hottest driver in the country as the second-generation Zanesville, Ohio driver doubled down at Pittsburgh’s Pennsylvania Motor Speedway Saturday night, winning both The Pittsburgher and The Ultimate, netting $30,000 in the Unified Force Race Championship doubleheader. | Slideshow

Hartman earned $10,000 apiece for the back-to-back feature events along with a $10,000 bonus for sweeping the races in the unique two-feature format.

Neither PPMS victory came easy as Hartman started eighth in the Pittsburgher and held off a late race charge from 17-year-old Austin Hubbard of Seaford, Del., in the first 51-lapper. Hartman’s victory in the second 51-lap event, The Ultimate, was even more of a challenge as he rallied from the 20th starting spot and overtook Hubbard to grab the lead and eventual victory.

“This is just amazing,” Hartman said after winning over $70,000 in the last eight days. “The car is running great and handling great, (crew chief) Austin (Hargrove) is doing a great job. ... We’re just really fortunate that things are going are way right now, you know.”

In Saturday's opening feature, Gregg Satterlee and Kyle Berck led the field to the green with Satterlee getting the early advantage. Jared Miley took the top spot on lap four and paced the field until defending race winner Steve Baker took command nine laps later. Baker’s time on the point would be short-lived, however, as he pulled pitside during a caution just one lap later.

On the double-file restart, Miley led Hubbard and Hartman back to the green with Hartman immediately grabbing second. Another restart on lap 19 allowed Hartman to shoot by Miley and into the lead in what proved to be the winning pass.

Hubbard tracked down the race leader in the closing stages of the event, briefly pulling alongside with less than two laps remaining, but Hartman held on for his second UFO victory of the season at PPMS.

In the nightcap, polesitter Jim Stephans led three laps before youngster Kyle Lukon took over. Through a rash of early cautions, Lukon stayed in control the next 11 circuits before losing the top spot to the 11th-starting Hubbard.

While the young guns were running up front, the veteran Hartman was quickly picking his way through the field from his 10th-row starting spot. Hartman cracked the top five on lap 14 and used a double-file restart to power into third on lap 15 and second on lap 17.

Another restart on lap 20 was all Hartman needed to roar past Hubbard and into the lead. With the $10,000 bonus in sight, Hartman stretched out his advantage to more than a half-straightaway by lap 30.

Hartman's big lead was erased by a caution with seven laps remaining. On the restart, Hubbard slipped and Matt Lux moved into second, only to have Hubbard pass him back on the next lap. After another caution two laps later, Hubbard once again slipped on the restart, this time shuffling him to fourth and moving Covert and 23rd-starting Keith Barbara up to second and third respectively.

Neither driver had anything for Hartman, however, the yellow No. 75 cruised to his second $10,000 victory of the night and a $30,000 windfall overall. Covert was second followed by Barbara, Hubbard and Lux.

Notes: Hartman’s Rocket Chassis is powered by a Cornett Engine and carries sponsorship from UrgentCash, Malta Windows & Doors, Lucas Oil Products, and Jarrett’s Body Shop. ... Among the drivers failing to make either race were John Mason, Chuck Harper, Brent Rhebergen, and Scott LeBarron. ... Jason Covert of York Haven, Pa., was making his first ever appearance at the half-mile oval. ... Also making his first appearance was Kyle Berck of Marquette, Neb., on a long trip from home while picking up a new Lazer Chassis from Pennsylvania driver and car builder Jim Bernheisel. ... With the original UFO season final at Hesston (Pa.) Speedway cancelled, Alex Ferree’s 12th-place finish in The Ultimate was good enough to clinch the 2009 UFO title, his second straight championship on the second-year series.