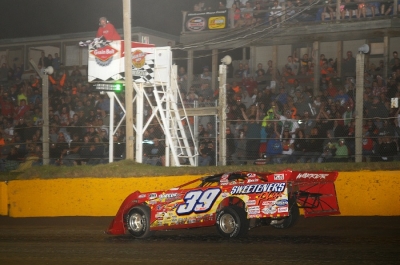 With the $50,150 score representing the biggest and most prestigious triumph of his decade-long Dirt Late Model career, the 39-year-old star from Watertown, N.Y., did joyful donuts in his Sweeteners Plus Warrior car off turn four, applauded the standing-room-only crowd in Victory Lane and even invited the fans to join him at his team’s trailer for a raucous post-race party. | Slideshow | Video | Notebook

Yes, it was a memorable evening for McCreadie, the 2006 World of Outlaws Late Model Series champion who has been chasing a signature win since returning full time to the national tour in 2010 following a brief foray into NASCAR (2007) and six months on the sidelines in 2009 due to a back injury.

“After everything I’ve gone through just with health and where I thought my career was going five years ago and where it ended up,” McCreadie said, “yeah, this is probably definitely at the top of the list.”

McCreadie earned his fifth WoO victory of the season after inheriting the lead on lap 54 of the 100-lapper when race-long pacesetter A.J. Diemel of Navarino, Wis., pulled to the infield with engine trouble. He controlled the remaining circuits, outrunning Don O’Neal of Martinsville, Ind., in a race slowed by just a single caution flag.

O’Neal, 49, spent the late stages of the event turning back repeated challenges from defending USA Nationals champion Darrell Lanigan of Union, Ky., to secure the runner-up spot and a $20,500 payday. The veteran driver steered Larry Moring’s MasterSbilt machine across the finish line 1.186 seconds behind McCreadie.

Lanigan, 43, settled for third place in his Rocket car after surviving a lap-96 backstretch scrape with O’Neal that momentarily sent both drivers sideways. He started ninth and ran behind O’Neal for the race’s final 58 laps.

WoO points leader Josh Richards of Shinnston, W.Va., who won the USA Nationals in 2011, finished fourth after starting from the outside pole in the Rocket Chassis house car and 12th-starter Brandon Sheppard of New Berlin, Ill., who captured Thursday night’s WoO preliminary feature, registered a career-best USA Nationals finish of fifth in his Rocket mount.

McCreadie started from the pole position after winning Friday’s six-lap dash for winners of the six 15-lap heat races, but he took an immediate back seat to home-state favorite Diemel when the green flag flew. Diemel bolted from the third starting spot to the lead on the opening lap and quickly established a convincing advantage, leaving McCreadie to battle for second with O’Neal.

Bidding to become just the second Wisconsin driver to win the USA Nationals alongside Jimmy Mars of Menomonie, Diemel led by as much as three seconds — nearly a full straightaway — before WoO LMS rookie Morgan Bagley of Longview, Texas, slowed with engine problems on lap 42 to trigger the lone caution flag of the 100. Diemel resumed his lead on the restart, but his hopes for an upset victory came to an end on lap 53 when he abruptly pulled his car into the infield with an apparent broken crankshaft.

Diemel’s departure presented a golden opportunity for McCreadie, who had his doubts about overtaking the popular Dairy State racer for the lead. McCreadie could only watch helplessly as Diemel blasted past him at the start of the race and was never able to mount a serious challenge for the top spot before Diemel retired.

“I went into (turn) one on the first lap and I couldn’t see or hear Josh (Richards) no more, so I just figured the cushion would be good and I eased up, turned it sideways because it was kind of slimy and A.J. just blew right on by me,” McCreadie said. “I thought, Oh man. So I just settled in and I was trying to run easy, but it’s hard to run easy here. Then Don O’Neal passed me (for second on lap 12) and that was it for me. I just got up and ran as hard as I could until it was over with.

“We had that one restart (on lap 42) and I stayed with (Diemel),” he continued. “I couldn’t stay with him before, but I stayed with him and I thought, Oh man, we might have a chance. I kept nosing beside him a little bit on the outside of (turns) three and four, but before he broke I lost a little bit of ground. I thought, Maybe we can hang on to second. That’s really kind of what I was hoping for. Then (Diemel) just had bad luck.

“I don’t think or know for sure if we could’ve passed him. I’m not gonna pretend or say I was taking it easy (while in second place), because I was running as hard as I could. I hate it for him because he is a real good guy. I’ve been around him a little bit and he’s first-class. His day will come, that’s for sure.”

With his right planted firmly to the floor once in command, McCreadie kept O’Neal at bay for the remainder of the distance. The former DIRTcar Northeast Big-Block Modified regular never let O’Neal get closer than a few car lengths.

“The closer it got to the end, the harder we ran,” said O’Neal, who started eighth. “At one point there when I started going into (turn) three real hard and sliding up to the top of four, I thought, Well, maybe I found something. We closed the gap there a little bit (on McCreadie), but then that sort of went away and I had to fend off the 29 car (Lanigan) from then on.”

O’Neal, whose best finish in four previous USA Nationals starts was 13th in 2012, remained winless for his career in WoO competition.

“I keep getting that $500 (WoO bonus for being the highest-finishing non-regular who hasn’t won a tour event), but I’d like to get a win,” O’Neal said. “We’ll go to (Iowa’s) Independence (Motor Speedway on Mon., Aug. 5) and see if maybe we can’t pull one off.”

Lanigan ducked underneath O’Neal often during the race’s second half, but the reigning WoO champion wasn’t quite able to complete a pass.

“We just needed him to mess up one time so we could clear him,” Lanigan said of O’Neal. “He kept coming back on me and I really didn’t have the lane to get up on him.

“I would’ve liked to get to (heavier) lapped traffic because I was better on the bottom than them guys (McCreadie and O’Neal). They were kind of married to the top, so I think if I could’ve raced with them in lapped traffic it would’ve been interesting.”

McCreadie slickly handled all the slower cars he had to deal with in the closing circuits, keeping him on top and preserving the party at his trailer that he had promised fans the previous night if he were to win the race. Not surprisingly, after McCreadie’s post-race picture-taking ceremonies were completed, he was greeted in the pits by a huge throng of well-wishers.

“I pulled in and it was just as loud as when I was in victory lane,” said McCreadie, whose best finish in seven previous USA Nationals starts was third in 2009. “These fans up here are amazing, that’s for sure.”

Finishing in positions 6-10 was Chad Simpson of Mount Vernon, Iowa, who started in the same spot; fourth-starter Rick Eckert of York, Pa., who slipped out of the top 10 midway through the race but rallied late; a quiet Jimmy Owens of Newport, Tenn.; five-time USA Nationals champion Billy Moyer of Batesville, Ark.; and 16-year-old Bobby Pierce of Oakwood, Ill., who recorded his second consecutive top-10 finish in the event.

Shannon Babb of Moweaqua, Ill., was among the drivers who had a potential strong finish short-circuited by mechanical woes. He charged from the 17th starting spot to fourth by lap 59 and — despite racing without rear brakes — was within striking distance of O’Neal and Lanigan when a burnt piston forced him to the infield on lap 79.