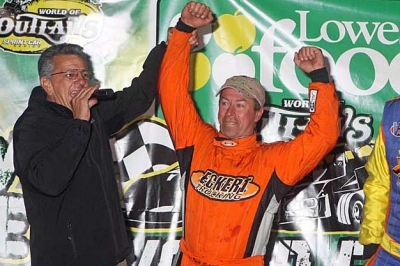 CONCORD, N.C. (Nov. 5) — Just as he had done all year on the World of Outlaws Late Model Series, Rick Eckert persevered Saturday night during the national tour’s final event of the season at The Dirt Track at Charlotte’s Lowes Foods World Finals presented by Tom Snack’s, Coca-Cola and Nature’s Own.

Even as he watched two-time defending series champ Josh Richards of Shinnston, W.Va., pull away from him during the waning laps of the $10,000-to-win event, taking with him Eckert’s hopes of securing his first World of Outlaws title, Eckert never gave up. The 45-year-old driver known as Scrub continued pressing his race car for all it was worth, holding to hope that somehow he’d run down Richards. | Complete World Finals coverage

“I never gave up,” Eckert of York, Pa., said. “I was still burning the tires off this thing. I wasn’t quitting.”

Not a moment too soon, Eckert’s determination was rewarded. With the white flag in the air, Richards suffered a flat-right rear tire in turn four, allowing Eckert to streak by on the race’s final lap en route to a 12th-place finish in the race and, more importantly, the $100,000 World of Outlaws championship.

“We come off four there and I seen him slip,” Eckert said when asked to describe the race’s final moments. “He got laying down there on the front straightaway and I’m like ‘is his right-rear tire going flat?’ I glance at the flagman to see how many laps we got and he’s throwing the white. I knew I had to hurry and get to him after that.”

Eckert did get to Richards, and during his championship celebration, he dedicated his title-winning season to his long-time car owner Raye Vest, who passed away during the 2009 World Finals. Vest’s wife Barbara made a rare visit to the racetrack Saturday to watch Eckert battle for the championship.

“Raye would still be here drinking seltzer water and screaming and hollering. I’m sure he helped me drive that whole race,” Eckert said of the man who he described as more like a second father rather than a car owner. “To win for him is special and she (Barbara Vest) flew down to come to this last race. It’s special.”

It was all almost too good to be true for Eckert, who even after the race was over still had trouble believing the events that unfolded on the racetrack.

“I knew he was in trouble and we snuck by him,” Eckert said as he celebrated with a large crowd of family, fans and supporters. “I didn’t really believe it really happened. I seen his car lay down on the front straightaway. When they lay down on the straightaway, there’s something wrong. You hate it for him, but we’ll take it.”

The dramatic finish brought to end a season-long points chase that came to a head at Charlotte’s doubleheader weekend. Eckert carried a 14-point advantage into Friday’s World Finals opener, but watched that lead nearly evaporate as Richards raced to a sixth-place finish and he finished 12th Friday night.

The outlook got even more dismal when Eckert failed to transfer to Saturday’s feature through his heat race. But a third-place heat finish by Richards and some helpful advice from fellow Team Zero by Bloomquist driver Chris Madden helped Eckert stay in contention.

Both Eckert and Richards gave all they had to get the job done in the feature, racing side-by-side at times as they swapped positions in what will likely go down as one of the most meaningful mid-pack battles in Dirt Late Model racing history.

The two title contenders avoided near disaster on lap 37 when a multi-car pileup occurred directly in front of them. Richards ducked low and appeared to escape mostly unscathed with only minor contact to the right-rear corner of his race car. Meanwhile, Eckert shot to the high side of the track and suffered right-side sheet metal damage as he squeaked through the mess.

“I seen ‘em crashing and I eased up, but someone got into me and pushed me into it,” Eckert said of the incident. “I went to go right, but someone was beside me. Dennis Erb was spinning there and I was like ‘come on, just spin farther.’ He spun just far enough I could sneak through there. But yeah, that didn’t help things either.”

Actually, the accident did prove to help Eckert. The contact Richards made with the sideways Darrell Lanigan left a gash in his right-rear tire that eventually gave way with two laps remaining, setting up the dramatic finish that both Eckert and Richards predicted before the start of the race.

“Josh and I talked and we were like ‘we’re making this great for the fans and as terrible for us as it could possibly be,’ Eckert said. “I told him it’ll probably come down to the last lap, and ironically it did.”

“I never gave up. I was still burning the tires off this thing. I wasn’t quitting.”