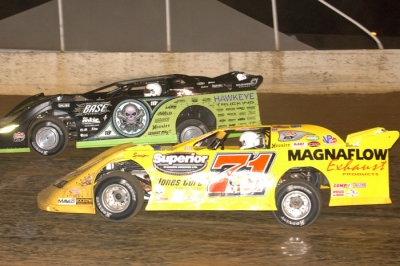 UNION, Ky. (June 4) — Don O'Neal led most of the Dart Show-Me 100 at Wheatland Mo., one week ago, but Jimmy Owens slipped by for the lucrative Lucas Oil Late Model Dirt Series victory. Leading late in Saturday's 25th annual Ralph Latham Memorial at Florence Speedway, O'Neal made certain to finish the job this time around.

The Martinsville, Ind., driver ended a nine-month winless streak on the Lucas Oil circuit, pocketing $10,000 at the half-mile over in northern Kentucky where he's been successful over the years.

"We've been close several times this year, but it sure feels good to get one here at Florence," said the 46-year-old O'Neal. "This is one of my favorite tracks, the track was in great shape tonight, you could run anywhere on it.

"I knew Jimmy was going to give me a run for it, we raced each other clean, I know I shut the door on him a few times, but after last week when he passed me late in the race with traffic, I wasn't going to let this one slip away."

While the 11th-starting Owens settled for second, he receive a nice consolation prize — the Lucas Oil points lead, which has belonged to two-time and reigning champion Scott Bloomquist of Mooresburg, Tenn., since April 25, 2009.

Bloomquist led three of the first four laps and was running in the top five when he was among drivers eliminated in a pileup in turns one and two on a restart in the second half of the 50-lapper.

Bloomquist, who entered the race with 15-point lead after struggling through a major accident the previous night in Tazewell, Tenn., fell 60 points behind Owens.

Bloomquist jumped into the lead over the polesitting James on the second lap, but O'Neal took command on the fifth lap as Bloomquist slipped to third. O'Neal and James battled several laps before the leader edged away.

That was erased by the worst of several accidents when the cars of Greg Johnson and Steve Casebolt both rolled in turn one. Johnson's car appeared to be destroyed while Casebolt's ended up on its wheels and he was able to continue. Neither driver was injured.

O'Neal went back to work with James, Bub McCool, Bloomquist and Owens in pursuit. Owens took fourth from Bloomquist on the 21st lap, and by the halfway point he was up to second and chasing O'Neal.

Owens tracked O'Neal the rest of the way, pulling even exiting turn two a number of times. O'Neal continued to shut the door.

Three separate cautions slowed the action on lap 36, including the accident that knocked Bloomquist and fifth-running Dale McDowell out of the race.

The last of 10 stoppages came with Tyler Reddick's flat tire on lap 46, setting up a four-lap dash to the checkers. O'Neal stayed in control the rest of the way to become the ninth series winner of the season.

Notes: O'Neal's MasterSbilt Race Car is powered by a Jay Dickens Racing Engine and sponsored by Magnaflow Exhaust, Superior Cleaning, Jones Core, VP Racing Fuels, Second Chance Livestock Dispatch and Brownstown Speedway. ... Jason Montgomery was among three drivers in a second-lap accident, but he came back to finish ninth ... More than half the field was involved in at least one of the many cautions. ... Josh McGuire rallied from 15th into the top five but lost fire under caution. ... Kent Robinson had two flat tires and was hampered by other cautions before calling it a night. ... Engine problems sidelined Mike Marlar. ... Earl Pearson Jr.'s 24th-to-fifth run gave him PBM/Erson Cams Hard Charger honors. ... Barely half the 26 starters were running at the finish. ... Among drivers failing to make the feature lineup: Josh Williams, Dan Schlieper, John Gill, Rick Combs, Wayne Chinn, David Spille, Matt Miller, Jesse Lay, Joe Janowski, Steve Landrum, Bobby Pierce and Jason Jameson, who hit the wall in his heat race battling for a transfer spot. ... Next up for Lucas Oil competitors is the June 17-18 weekend at Cherokee Speedway in Gaffney, S.C., and Wythe Raceway in Rural Retreat, Va. Both features pay $10,000 to the winner.