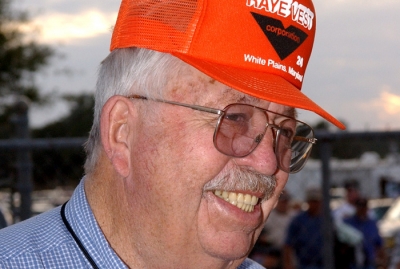 “He was the best car owner a driver could ever ask for – he loved racing more than anybody I've ever known," Eckert said of Vest, who died at his White Plains, Md., after a lengthy illness. He was 76.

A hard-working, self-made man, Vest attended his first dirt-track race in 1949 at Martinsville (Va.) Speedway — he was raised in the mountains of western Virginia, about 2 miles from the home of NASCAR pioneer Curtis Turner — but didn't become actively involved in the sport until later in life. Nearly 25 years ago he began helping driver George Moreland after his children had grown up and his business, Raye Vest Excavating, had become well-established. He soon developed into a full-fledged team owner.

Vest first met Eckert during the early ‘90s. He grew more friendly with the then rising young driver when Eckert and Vest's team (with driver Nathan Durboraw) often traveled together on the former STARS tour, and in 1995 Vest phoned with a ride offer.

“Raye and Nathan had split and he started the year with Rodney Franklin,” Eckert said. “I think it was halfway through the year and (Vest and Franklin) split up. Raye called me up and asked if I was interested in driving his car. I told him, ‘Sure,' so he said, ‘Why don't you drive down here and we'll talk about it?'

“I drove down to his house and – well, it was sort of strange. We were talking, sitting in his living room. We had everything hashed out, everything's looking good, and his wife walks in and says, ‘Hi, I'm Barb. I just want to tell you that I hate racing. I hate race cars. They don't make any sense to me.' She walked back out of the room and I said to Raye, ‘Are you sure you want to do this? He was like, ‘Yep, I'm sure.'”

Barb Vest eventually came around to her husband's beloved hobby.

“Over the years we've got to where Barb and all of us are like family,” said Eckert, who with his wife, Kristal, has often vacationed with Vest and his wife at Vest's off-season home on the Caribbean island of St. Maarten. “She was never overly thrilled with the racing until she seen how much he loved it. When he retired (after selling his business in 2003), she really loved it because it gave him something to keep him going.

“Matter of fact, I remember one thing Barb said a couple years ago, right here at Charlotte,” he continued. “Every year for the past five years it's been rumored that Raye was quitting, and we were there in his camper when Nathan Durboraw climbed in and asked him, ‘Raye, I hear you're quitting.' Raye said, ‘Where'd you hear that at?' and Nathan told him, ‘I heard it in the pits.'

Eckert's voice trails off for a moment. Fighting back tears, he added, “Turns out, that is what happened.”

Vest had, in fact, informed Eckert earlier this year that the 2009 season would bring an end to their amazingly long and successful run as owner and driver. With his failing health preventing him from attending no more than a handful of races in recent years, he decided that the time had come to shut down his race team.

“The last couple years he could get to four or five races, but this year he barely got to any,” said the 43-year-old Eckert. “It just got to where it was so hard for him to go, so when he said he was gonna quit, I totally understood.”

Nevertheless, it had to be a gut-wrenching decision for Vest, who enjoyed his greatest racing days with Eckert, including two Xtreme DirtCar Series championships, a $100,000 Dream victory and a Dirt Track World Championship.

Vest cherished all the memorable moments that Eckert provided him, but he cared even more for the personal relationship he developed with his hired gun.

“There aren't many people like Rick Eckert,” Vest said two years ago after receiving the WoO Outstanding Contribution to the Sport award. “He's a very honest man, a good man, a good boy.

“He's also a hard worker, and that's what you're looking for as a car owner. He's treats my stuff like it's his, which is one of the main reasons him and I have been together so long.”

And one of the reasons why Vest made sure Eckert's future would remain solid upon his departure as a car owner.

“After Raye told me (of his decision to leave racing), he said, ‘Well, what do you think I oughta do with all this racing stuff?'” recalled Eckert. “I told him, ‘Somehow, I'd like to buy it or somehow take it over to where I can keep racing it.' He said, ‘Well, OK, we'll work something out.'

“In a matter of a week or so we hashed everything out. He didn't really want anyone to know, and I didn't care if anybody knew either. Then, just a couple of weeks ago, he said, ‘You can probably start telling people now that I'm not gonna be back.' I thought, It's not that big a deal. Let's just wait until the end of the year.”

Vest's passing prompted Eckert to reveal the news with three races still remaining on the 2009 WoO schedule. He then admitted that this weekend's meet at The Dirt Track, which includes the season-ending World Finals on Nov. 5-7, would be the toughest races he's ever run in his life.

“I probably would think about loading up and going home right now,” Eckert said while still coming to grips with Vest's passing on Wednesday afternoon. “But I know he would say, ‘Get out there and race.' ”

So Eckert will run one more weekend with Raye Vest officially listed as his car owner. Vest will always, after all, remain in Eckert's heart.

“Once we settled what we were doing (with Vest's equipment), he said to me, ‘I still want to be able to call the shop,'” said Eckert, his voice beginning to crack. “I told him, ‘I wouldn't expect you not to, you know?' ”

Eckert paused. With his wife hugging him from behind and a tear rolling down his cheek from behind a pair of dark sunglasses, Eckert said of Vest, “He calls the shop every day ... every day.”

No longer will Eckert hear Vest's distinctive southern drawl on the other end of those daily phone calls, but the car owner's memory will certainly live on.