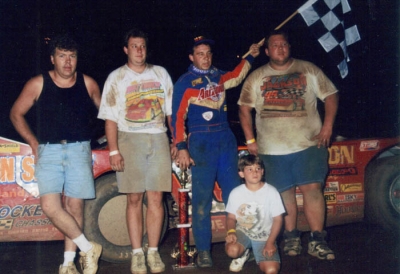 Steve Francis was there when Josh Richards drove a Dirt Late Model for the first time. Now, six-and-a-half years later, Francis and Richards are battling for the 2009 World of Outlaws Late Model Series title.

Francis vs. Richards. The 42-year-old veteran from Kentucky vs. the 21-year-old young gun from West Virginia. The proven champion vs. the hopeful champion. The mentor vs. the student.

A season spent criss-crossing the country comes down to two racers who know each other well — very well — in a virtual dead-heat for a $100,000 championship prize entering the third annual World of Outlaws World Finals on Nov. 5-7 at the Dirt Track at Lowe's Motor Speedway.

“It's definitely a different situation to be racing for a championship against somebody you're so close to,” said Francis, who has known Richards's father, Mark, for two decades and has watched Josh grow from a shy kid to a confident Dirt Late Model superstar. “With Josh, I kind of feel like a father would in that I'm proud to have played a little part in seeing him get to where he is so fast. I want to see him do good and I'd like to see him win the championship — but not at my expense, which is where the mixed emotions come in.”

Richards is experiencing the same type of conflicted feelings as his friendly war with Francis heads to its dramatic conclusion.

“He's been one of the biggest helpers I've had in my career,” Richards said. “He's been mentoring me since I started. He's taught me a lot, so it's kind of weird that we'll be trying to use some of that knowledge to beat him for the championship.”

Francis brings a scant four-point lead over Richards into the Lowe's season-ending spectacular, which actually kicks off on Nov. 4 with the postponed Topless Showdown. The topless event offers only tour show-up points, however, so the two 50-lappers at the World Finals will determine the '09 champion.

“We're going there tied is what it amounts to in my mind,” said Francis, who overtook Richards for the points lead in the last WoO LMS event contested, on Sept. 6 at Tri-City Speedway in Franklin, Pa. “Four points is just a couple (finishing) positions, so there's basically no difference. There's no scenarios to think about — you just put your helmet on and go racing.

“Hopefully it doesn't come down to bad luck for either of us and we can race it out.”

Considering the nip-and-tuck nature of the '09 WoO points chase, it's likely the two drivers will take their battle down to the last lap Nov. 7. They have, after all, produced remarkably similar performance records. Richards has seven wins, Francis six. Francis has nine runner-up finishes, Richards six. Francis has 24 top-five finishes in 37 events, Richards 21. Richards pulled off a late-race pass of Francis to win on July 16 at Huron, S.D., and Francis returned the favor on Sept. 5 at Tri-City.

Both drivers have 31 top-10 finishes, five fast-time honors and failed to qualify through a heat race just once (resulting in the lone provisional starting spots each has used this season). Richards has held at least a share of the points lead after 23 events, Francis after 11 — and they were tied for the top spot after the July 8 Gopher 50 at Minnesota's Deer Creek Speedway.

“It seems like we've been married to each other all year,” Francis said of their nearly mirror-image stats and penchant for running close together. “I'm sure that's the way it will be again. We'll probably be parked right beside each other like we have been most of the season, and I'm sure we'll talk and help each other all weekend like we always have.

“This is not a rivalry-type thing,” he added. “I feel like I've had a part in his development.”

Indeed, throughout Richards's march from little kid tagging along to the races with his father to the brink of a WoO LMS title, Francis has been there. Francis has long run cars built by Rocket Chassis, the Shinnston, W.Va.-based business co-owned by Mark Richards, and in 2002-2003 Francis drove the Mark Richards Racing Enterprises/Rocket Chassis house car that Josh now campaigns.

“I remember when Josh was 10, 11 years old, he was a shy, quiet kid who would barely say anything,” said Francis. “You didn't know if he had that much interest in (driving), but by the time I left (as the Rocket house driver) he was getting into it. I could tell where he was headed.”

In fact, in the spring of 2003, Francis stood in awe at I-79 Raceway — a now-shuttered quarter-mile oval across the street from the Rocket shop that Mark Richards formerly co-promoted — when Josh took his first laps behind the wheel of a Dirt Late Model. With Josh, then 15, downtrodden because his high-school classes meant he couldn't head out on a road trip with his dad and Francis, Mark Richards tried to cheer his son up by offering him a chance to hot-lap the team's backup car. Josh jumped right in and almost immediately got the machine up to speed.

“I told Mark right there, ‘When I get done, there's your next driver,' ” recalled Francis.

By 2005, Richards was the WoO Rookie of the Year. He's improved every season since then, finishing ninth in the 2006 points standings, sixth in 2007 and second in 2008. Now he's attempting to continue his progression by winning the championship over Francis, who won the title in 2007 and is bidding to become the first repeat champ since the WoO was rekindled in 2004 under the World Racing Group banner.

Francis, who is chasing this year's points crown driving for Maryland's Dale Beitler after winning the '07 title with his own equipment, isn't surprised that Richards is contending for a championship on a series that he calls “the top echelon of the sport.”

“I did think it could happen,” Francis said when asked if he expected Richards to be going for a title just six years after debuting in the division. “He has the ability to drive a race car, he works on his race car, he understands his race car, and he has as good a group of people behind him as you could ever have.

“Josh takes a lot of grief sometimes about having this-and-that handed to him, but I've been to the shop and seen him working at midnight or 1 o'clock. It's not like he didn't earn his shot at a championship.”

For his part, the polite, easy-going Richards modestly deflects the praise thrown his way by Francis. He almost feels like he's crashing a party by running neck-and-neck with Francis for the crown.

“I've always looked up to him,” Richards said of Francis. “I'm real honored to be up there racing for the World of Outlaws championship with him. I never would've thought it was possible, but I dreamed it. I had it in my mind before I started (racing) that if you set your mind to it, if you have the passion and desire to do it, if you have the support and just believe in yourself, you can have success pretty quickly.”

Richards knows he faces the challenge of his racing career during the World Finals. He's pitted against a driver who's been racing for more years than he's been alive, a battle-tested chauffeur who's been in series points races that have literally come down to the last lap of the season — in 2005, Francis lost the WoO title to Billy Moyer on a tiebreaker after being passed for position by Moyer on the final circuit of the Gator 100 at Florida's Volusia Speedway Park.

“Francis isn't gonna let up,” said Richards, who outdueled Francis during last year's World Finals to finish second in the WoO standings (one spot ahead of Francis). “He's gonna give it 120 percent on every lap, in every corner. He's been through everything before, so you know if you can beat him it will definitely mean a lot.”

Richards, of course, has never entered the final event of a season in position to win a points title. His father Mark, meanwhile, hasn't enjoyed a championship celebration since 1983, when he and Rodney Combs co-owned the car that Combs drove to the National Dirt Racing Association (NDRA) series crown, so there figures to be plenty of anxiousness in the Richards pit during the World Finals.

Can the young Richards handle the pressure? His cool, calm personality should have him equipped for the mental aspect of the weekend, but it's still a new experience for him.

“I've always been pretty relaxed at the track, but this is definitely gonna test my limits,” Richards said. “I'm sure where (Francis) is at is always gonna be in the back of my mind all weekend, but he'll be thinking the same way. He's been in the situation before where he's lost close points battles and he doesn't want to let it happen again, so we'll have to be on top of our game.”