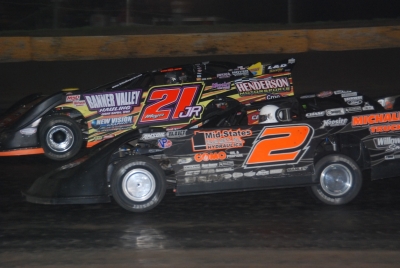 “Let’s just go for No. 4, how’s that?” the younger Moyer said in victory lane after a two-race weekend sweep at Cedar Lake. “This is how this sport is. I just can’t stress enough, tomorrow you can be lapped traffic, but we’re going to celebrate this pretty big tonight and get together and get our car right for Wilmot (Raceway), then finally have a day off. Hopefully we can go and eat something good instead of something out of the microwave.”

Moyer celebrated his third roof-stomping victory on the series, welcomed crew members Dennis Bequette and Matt Hubble with hugs, and then put his arms around mom Joyce and dad Billy for victory lane pictures.

He credited his father for helping him whip his Victory Circle Chassis into shape and sending him on a stretch of six victories in his last 10 starts overall.

“I was slumping early in the year especially, and he done a couple of things and tweaks on this thing, and it it wasn’t for him, there’s no way I’d probably run in the top 10 in any of these,” said the younger Moyer, who was winless on the Summernationals circuit until Wednesday’s victory in Brownstown, Ind. “Bottom line is, if it wasn’t for my dad, the car’s not even close ... If it wasn’t for him, we wouldn’t be standing here any of these nights.”

Seventh-starting Brady Smith of Solon Springs, Wis., nearly pulled alongside Moyer with 15 laps remaining in the 50-lapper, but settled for second. Reigning series champ Shannon Babb of Moweaqua, Ill. — who charged into contention on the high side before a controversial spin helped knock him from contention — finished third with polesitter Jason McBride of Carbondale, Ill., and Brian Shirley of Chatham, Ill., rounding out the top five.

Moyer started outside the front row and got the jump on McBride with Babb, Shirley and Smith giving chase after 10 laps. Babb powered the high-side cushion around McBride on the 21st lap, but after dropping lower amid traffic, made contact with the lapped car of Charlie McKenna and got completely sideways.

Although Babb detoured through the infield and back onto the track, a caution appeared. The lap-25 yellow flag was ruled premature and Babb restored to his position because he never stopped.

“At that point we were second right on Little Billy, but you know, when you get into traffic, things like that are going to happen,” Babb said.

On the restart, Smith came alive, quickly taking third from McBride and then second from Babb on lap 28. But as Smith was moving in to challenge Moyer, he realized the track surface was starting to limit racing to a single groove.

Smith challenged on laps 33 and 34, dipping underneath the leader, but Moyer kept Smith in check the rest of the way.

Moyer was grateful that Smith raced him clean, much like Brian Shirley did a night earlier in similar circumstances.

“(Smith and Shirley) and Babb, them guys, it seems like I show much respect over the years, and I’m just, ‘Man, maybe one day if I’m ever good enough, I’ll get it back.’ And that’s two nights in a row. All (Smith) had to do was touch me, all Shirley and to do was touch me and we don’t win,” Moyer said.

“I thought we were going to get him there, but we’re proud to be second,” Smith said in victory lane. “With this competition, and congratulations to Billy, I told him he did a good job. He said thanks for racing me like that, and I said, ‘Hey, that’s how I’d want to be raced,’ so that’s how I raced him. We did want to win that thing really bad, and I did think we were going to — but second’s good with this competition.”

Notes: Moyer's Victory Circle Chassis has a Pro Power engine and sponsorship from Banner Valley Hauling, Henderson Motorsports, Imperial Motors and Car City. ... Moyer’s victory gives Victory Circle cars 11 consecutive wins in Summernationalts points races split between Moyer Jr. and Babb. ... Jason McBride’s fourth-place finish was a career-best on the series. ... McBride and Shirley were among drivers unhappy with the ruling that restored Babb to the second spot after the lap-25 caution for his infield foray. Ryan Unzicker spun under similar circumstances on Thursday at Kankakee, Ill., and no doubt the issue of prematurely thrown caution flags will come up Sunday when the series heads to the sprint car haunt of Wilmot (Wis.) Raceway for a Tony Izzo Jr. co-promoted event on Sunday. ... Summernationals drivers take Monday off.

Jason Feger got the jump on polesitter at the outside and raced to a high-side victory. Henry held the second spot until he skated across turn two on the sixth lap, allowing Brian Birkhofer to sneak past for the final transfer spot. Henry was third with Ryan Unzicker and Dennis Erb Jr. just behind in the 12-lapper.

Jason McBride, looking for his first career Summernationals victory, is on the pole position for the 50-lap feature after a redraw among heat race winners Friday's winner Billy Moyer Jr. will start alongside on the front row while Chad Simpson and Shannon Babb will start on the second row. Provisional starters are Bobby Pierce, Ryan Unzicker, Jon Henry and Dennis Erb Jr.

Polesitter Jason McBride rode the low groove to victory over Jimmy Mars, a two-time winner this year at Cedar Lake. Those frontrunners pulled away from the field and a good battle for third between second-row starters Mike Spatola (outside) and A.J. Diemel (inside). The pair ran side-by-side virtually the entire race with neither giving an inch. Diemel finally decided it before the white flag to beat Spatola to the finish as both transferred to the main. The first start was scrapped when Andrew McKay and Mike Fryer banged together between turns three and four on the first lap, leaving Fryer's No. 5m turned around. Both cars received body damage and Fryer was towed off the track.

Polesitter and Friday winner Billy Moyer Jr. led all 10 laps, pulling away from his father and felow front-row starter for the victory. Third-starting Brady Smith dropped the elder Moyer to third early in the race as the Hall of Famer failed to win a heat race for the first time in four Summernationals starts in 2012. The top three were far ahead of the field as Chris Simpson got the fourth and final transfer spot in outrunning last night's runner-up, Brian Birkhofer.

Polesitter Shannon Babb got the jump at the outset but quickly had his hands full with fifth-starting Brian Shirley, who zipped to the front in the low groove in the early laps. Shirley took the lead exiting turn two on the sixth lap and led a few laps, but Babb stuck with the high groove to run him down and regain the lead. Shirley was a close second while Don O'Neal was just behind for the third spot and Terry Casey, who nearly got sideways in turn two midway through the race, got the fourth and final transfer spot. Bobby Pierce started outside the front row and got scarily high in turns one and two on the first lap, then slipped back to fifth. He slowed on the last lap with a shredded right-rear tire, and likely other problems as his No. 32 was towed off the track.

Getting the jump after polesitter Brandon Sheppard was warned for jumping the initial start, outside front-row starter Chad Simpson raced to victory in the first 10-lap prelim. Sheppard chased him in the high groove but never made a serious bid for the lead as they edged away from third-running Frank Heckenast Jr. Charlie McKenna came alive in the low groove after a mid-race restart to briefly steal fourth from Jon Henry and then third from Heckenast, who settled for the fourth and final transfer spot. A caution flew on the fifth lap when Jerry Lierly spun inside in turns three and four; Nick Bartels nearly did the same early in the race, but he kept going and caught up to the field when the yellow flew.

Babb turned a lap of 14.268 seconds at the 3/8-mile oval to earn the pole position for one of four heat races. Other heat race polesitters after group time trials: Brandon Sheppard of New Berlin, Ill.; last night’s winner Billy Moyer Jr. of Batesville, Ark.; and Jason McBride of Carbondale, Ill.

Terry Casey was initially disqualified for being below the 2,300-pound minimum, but officials reversed the decision after finding a problem with the scales. Cars apparently won't weigh the rest of the night. ... Jason Rauen got into the turn-two wall in time trials; he was able to limp the car to the pits but loaded up upon arriving in the pits. ... After it rained a few hours in the late morning and early afternoon, skies cleared. Another threatening band of showers split north and south of the track later in the afternoon and the evening is quite splendid. ... The car count is down five cars from Friday with Tim and Steve Isenberg among those not returning. ... Six-time series champ Billy Moyer of Batesville, Ark., leads the series with 205 points while his son Billy Moyer Jr. has 203 points after Friday’s victory at Cedar Lake gave him his second win in three series starts. Brian Shirley (185), reigning series champ Shannon Babb (178) and Terry Casey (163) round out the top five spots after three of 29 events on the month-long tour. ... Brent Larson is giving rides in Cedar Lake's two-seat Late Model. ... The United States Modified Touring Series is sanctioning the only other action of the night with about 40 modifieds expected.