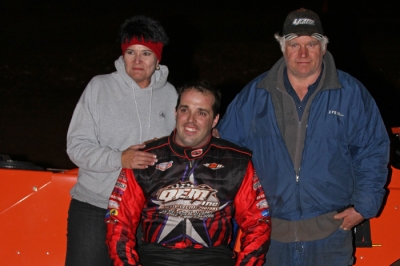 CLARKSVILLE, Tenn. (March 3) — Jesse Stovall has fielded cars for a few different teams in recent years, and suddenly he has a couple of teams seeking his driving talents at the same time. The 31-year-old Galena, Mo., driver hopes it works out for the best.

Making his first career start for car owner Al Humphrey of Giltner, Neb., this weekend at the Tuckassee Toilet Bowl Classic, Stovall finished third in Friday's opener before earning $5,000 with a victory in Saturday's finale. It was his first time driving Humphrey's Victory Circle Chassis, but the two drivers — Humphrey doesn't get behind the wheel much anymore — have formed a friendship the last year or so. | Stovall wins at Clarksville | Sidebar slideshow

"It's kind of funny, we became friends when I was begging him to sell me a broke, bent-up race car that he had (after) he had a little bit of misfortune with in Arizona," Stovall recalled. "I went over and talked to him in Nebraska and asked him if he'd like to sell that car, and then after that, for some reason, we started talking every weekend.

"Every Monday it seemed like we'd talk for an hour or two and give each other the racing report. We've just kind of slowly built a relationship. We've always kind of wanted to race, to go racing together once and see how things go. I don't know where it'll go from here, but this has obviously been a good outing and the good start to a good relationship. I hope there's better things to come."

Stovall was diplomatic in realizing the he'd started the season with long-time supporter Fred Bishop at Tucson, Ariz.'s Wild West Shootout, and he wouldn't mind if things worked out where he could have a fruitful season for Bishop and Humphrey.

"Fred Bishop, my No. 1 car owner, I couldn't do it without him. He's like second family member to me and he is just unreal. Him and Al and his wife Lori and all the help that we had here with (Humphrey) this weekend, it was just tremendous. I just can't thank 'em enough.

"I don't know what'll happen. I'm not saying anything's set in stone here, but the greatest thing in the world would be to have two great car owners like this. If something works out great, if it don't, great. We're all still going to be great friends, and if this is the last time I ever drive (Humphrey's car), fine. We'll still talk every Monday, I'm sure.

"It could turn into something really, really serious I think, and we could be a great team, because Al, he's raced for a long time, and he's really knowledgeable in my book on setups. He can kind of watch me and tell me. It's great to have a racer help a racer, and I think that could make for a killer combination."

Brian Shirley of Chatham, Ill., outdueled polesitter and fellow front-row starter Jason McBride to lead early in Saturday's feature at Clarksville, but it was soon clear he wasn't fast enough on the bottom of the track to hold off winner Jesse Stovall and runner-up David Turner. But a top-five finish wasn't the worst thing.

"After last night, as bad as we were last night, to rebound to third, I'm not going to complain about that for sure," Shirley said.

"We were really bad. ... We just weren't up to speed, I don't know," said Shirley, a former winner at Clarksville who was a disappointing 13th on Friday. "You come here, and the tire rule is (Hoosier LM) 40s, and the cars are a little different when they're hard tires right off the bat. We actually had a back right-front shock, so that kind of helped (fix things) a little bit, and we kind of worked on a few things, and at least got up to speed.

"It wasn't like they were super-gone in front of us by the end of the race (Saturday). It was just a situation that the better car would win tonight ... We just didn't have the best car. If the circumstances were right, we might've been able to be right there to win, but all in all, at least it was a top-five. Hopefully the hill starts going down for me."

Shirley, who had a disappointing Florida Speedweeks in never finishing better than 18th, was already looking forward to his next trip to Clarksville.

"Maybe next time we come back we won't be this far out in left field," he said. "We just couldn't get out of our own way last night. ... We won our heat, set fast time (in his group Saturday), so it's all positive stuff."

Late Model newcomer Brandon Morton of Coweta, Okla., is chasing the MARS tour in 2012, and he knows that visiting unfamiliar tracks — like Clarksville's quarter-mile — means it takes him a while to get up to speed at each event.

"We're really fast by the end of the night," the 37-year-old driver said with a laugh following Saturday night's heat race, "but by then it's too late."

It wasn't as late as he thought on Saturday. While Morton wasn't a factor Friday, he got rolling soon enough Saturday night at Clarksville to win one of two consolation races. He jumped to the high side and went from third to first in the closing laps to earn a starting spot in the 40-lap feature event, then made a solid 17th-to-seventh run for his best career MARS finish.

The night proved to be a nice flash of success for Morton, an excavating contractor who knows he faces a challenge in battling the veteran drivers on the MARS tours. Morton raced open-wheel modifieds for about a dozen years, winning the 2000 championship at Salina (Okla.) Highbanks Speedway and finding a measure of success in the division.

Morton decided to make the jump to Late Models last season, making about 10 starts, including four on the MARS circuit. He scored a then-career-best eighth-place finish in MARS action at the half-mile Thunderbird Speedway in Muskogee, Okla., one of his favorite tracks.

He still owns his modified equipment, but he's committed to the MARS tour. His goals? "Just be competitive and win a few races," said Morton, who paused and then added. "We're not getting off to a good start."

He's piloting a 2009 Rocket Chassis previously driven by former World of Outlaws Late Model Series champion Tim McCreadie, and he knows he faces a learning curve. "From track to track, we're just going to have to learn what we need to do to these cars," he said.

After struggling for much of his trip to Florida Speedweeks, Greg Johnson of Bedford, Ind., found his groove at Clarksville. The 44-year-old veteran ran a solid second in Friday's opening feature and looked to be a contender Saturday before breaking while running second in a heat race.

That knocked Johnson out of contention in the weekend finale when broken rear-end gears in turn led to a broken driveshaft along with a broken starter that forced the Jack Rainey-owned team to load up early.

Still, Johnson was in better spirits about his blue No. 49 car with it running significantly better than it did during Speedweeks. After making one World of Outlaws Late Model Series feature at Screven Motor Speedway in Sylvania, Ga., and one at Bubba Raceway Park in Ocala, Fla., Johnson failed to make a single feature event during a week of racing at Volusia Speedway Park in Barberville.

Uncertain why the engine wasn't performing at Volusia, Johnson said he and the crew changed fuel regulators — and then switched to a different barrel of fuel — and suddenly the powerplant was humming again.

"It sounded like a different motor," Johnson said. "We knew the motor wasn't (up to par) but we didn't know what was going on."

Johnson plans to run next weekend at Brownstown (Ind.) Speedway's season opener, March 17 at Florence (Ky.) Speedway's Spring 50 and then back at Brownstown for the Lucas Oil-sanctioned Indiana Icebreaker. From there, the team heads back to the World of Outlaws Late Model Series for its chase of the series rookie title. Johnson stands 24th in overall WoO points.