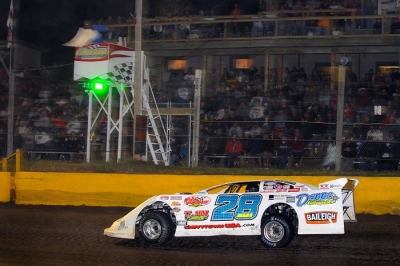 NEW RICHMOND, Wis. (Aug. 1) — Jimmy Mars was getting awful tired of hearing the same old answer about when he might when his second USA Nationals title at Cedar Lake Speedway. "Maybe next year" was wearing a little thin for the 37-year-old driver from Menomonie, Wis., whose 1996 USA Nationals victory was the first big-purse triumph of his successful career. | Slideshow | Blog-style reports from Saturday's action | USA Nationals history

Mars showed Cedar Lake newcomer Tim Fuller how tough it is to win one of Dirt Late Model racing's most lucrative unsanctioned events. Making an impressive outside move after passing became difficult, Mars swept past the leading Fuller in turn one on the 57th lap to grab a lead he'd never give up in the 100-lap feature, completing a whopping $50,000 payday in the Upper Midwest's richest Dirt Late Model event.

Snapping his 13-year drought in the 22nd version of Cedar Lake's centerpiece event nearly brought tears to the eyes of Mars as he celebrated in victory lane in front of a home-state crowd that cheered loudly when his familiar white No. 28 drove under the checkered flag at the 3/8-mile oval.

"I'm still kind of trying not to be choked up here," Mars said later in an interview. "People just don't know how tough this race is to win."

The ability of Mars to accomplish the task impressed the drivers whose cars didn't have the flexibility to handle shifting track surface conditions that went from three-wide to single-file before the halfway point of the race.

"I'm happy. You don't see me get passed for the lead and finish second and still smile," said Fuller, the Watertown, N.Y., driver trying to duplicate his victory in Thursday's WDRL-sanctioned tuneup and led 54 of the first 56 laps after starting outside the front row. "I got beat by a guy that had the better car tonight, and we had some good racing side-by-side there."

"Our Rocket cars are really good right now, just not as good as Jimmy Mars is in this condition."

Fellow Watertown, N.Y., driver and third-place finisher Tim McCreadie consoled Fuller about his loss after seeing that the M-B Customs Chassis of Mars handled the evolving track conditions better than anyone else as the surface picked up a rubber strip.

"Right about lap 30, it started really getting a little bit of a streak off (turn) four, and once that happened, I think we all knew we were in some trouble," McCreadie said. "But Jimmy, he did a good job — he did what I'd have liked to have tried do, wheel on the outside of somebody. I couldn't do that.

"It's just like I told Fuller — I know he feels bad, because I've been there — but he didn't give one away. The guy just had the better car and it was a good move. That's the way it goes sometimes."

McCreadie finished third after a tight battle in the second half of the race with two-time race winner Brian Birkhofer of Muscatine, Iowa, while Chris Madden of Gray Court, S.C., rallied from the tail of the 26-car field to finish fifth.

For Mars it was his sixth victory of the season at Cedar Lake, where he has run four times in the track's weekly Late Model division, and adds to an impressive string of victories for the M-B Customs Chassis that was designed in collaboration with Jimmy's brother and crew chief Chris Mars along with Birkhofer.

Although Mars and Birkhofer are the only two drivers in the country piloting the limited-edition cars, in the last nine Super Late Model events paying more than $20,000-to-win, M-B Customs has won an incredible seven of them.

The weekend started with a scare for Mars when a flat tire in time trials nearly kept him from even recording a qualifying lap. Officials allowed Mars to change tires and take a time trial lap later, but he still was forced to rally from his eighth starting spot in a prelim for a second-place heat finish that put him in the fifth row for the main event. That was close enough to the front for Mars.

"The car was awesome all night. We knew at the beginning of it we were going to have to maintain. And actually, I was surprised it was as good as it was at the beginning of it. Usually I start out a little slow and not be able to squirt up through there, but I was able to do that at the beginning and pick some cars off," he said. "Everything just worked out awesome. I can't say enough for how the car worked."

Fuller started outside the front row and set a torrid pace over McCreadie early in the race while Mars worked his way to the front, moving into fourth after a lap-10 restart. By lap 21 Mars took the runner-up spot from McCreadie and nearly took the lead from Fuller before a lap-28 caution slowed the action.

Fuller led comfortably the next dozen laps, but Mars challenged as Fuller faced lapped traffic and briefly edged ahead when Fuller had difficulty putting a lap on Jeep Van Wormer. Cautions on laps 45 and 46 gave Fuller a respite and Mars briefly fell back to third behind Birkhofer.

"I don't know how many laps we were battling it out, but it was crazy," Mars said. "I was just going for the lead and then we had that yellow and I took back off and I thought, 'Well, maybe I'll be able to get underneath him again,' " Mars said.

Instead, Mars had to adjust to a tighter-handling car to get back to second, and then plotted an outside move that worked to perfection when he drove deeper than Fuller into turn one.

"Fuller started having to whoa up a little bit," Mars said. "He got kind of tight on the bottom and was trying to protect the rubber there, and I was able to roll around him on the outside."

Fuller's car performed well early in the race but didn't like the changing track conditions.

"I knew when it was taking rubber I was a sitting duck because I've been through this this year before a couple of times. When you set up for slick-track racing and then it takes rubber, I'm just way too tight and the front end wants to pick up and move over a lane."

With no more cautions the rest of the way — and Mars getting a lapped-car cushion in the form of Dustin Hapka protecting him — Fuller and the other pursuers never had a serious chance at catching the winner.

The race was slowed by six cautions over the first 46 laps, the most serious for the lap-46 turn-four scramble that included Justin Fegers, Terry Casey and Rick Aukland and sparked contact among other competitors trying to avoid the mess. The other yellows were for single-car incidents or flat tires.

Notes: Mars drives an M-B Customs Chassis with a Pro Power Engine and sponsorship from Deppe Enterprises, T.L. Sinz Plumbing, Keyes Chevytown and Baileigh Industrial. ... Twenty-one of 26 starters were running at the finish with 16 drivers on the lead lap. ... Other cautions were for a spin by Chris Wall (lap 10), a slowing Scott James (lap 13), a spin by Brady Smith (lap 18), a slowing Josh McGuire (lap 28) and a slowing Shannon Babb (lap 45). ... Officials were considering a fine on the team of Justin Fegers a crew member threw an object into the cockpit of Terry Casey's car in the hot pit area following the lap-46 incident involving the drivers. ... The 26-car field was made up of drivers from 15 states with only Wisconsin (six) and Illinois (four) having more than two representatives.