Information provided by: Staff and series reports (last updated May 19, 12:22 am)
O'Neal races to $22,022 victory at Marshalltown 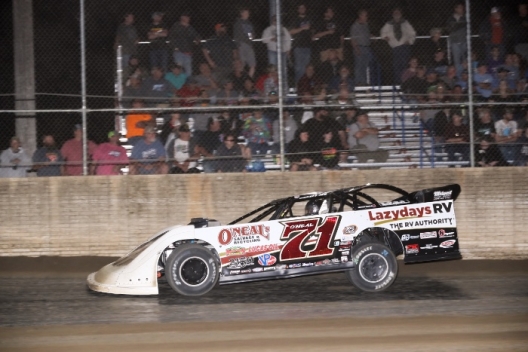 MARSHALLTOWN, Iowa — Hudson O’Neal says his Double Down Motorsports team has been inching toward success in recent weeks. So perhaps it’s fitting O’Neal's car was within inches of slipping over the razor-thin cushion Wednesday evening at Marshalltown Speedway.

Surviving a few close calls on the high groove at the wall-free oval, the 21-year-old driver from Martinsville, Ind., raced to his first victory of the season, earning $22,022 for a Castrol FloRacing Night in America triumph. O’Neal slid past race-long leader and hometown driver Ryan Gustin on the 31st of 50 laps and fought off Gustin, runner-up Brandon Sheppard of New Berlin, Ill., as well as polesitter and third-place finisher Mike Marlar of Winfield, Tenn., in scoring his first victory since Oct. 2, 2021, at Pittsburgh's Pennsylvania Motor Speedway in Imperial, Pa.

"I couldn't see behind me, but my guys were giving me a pretty close signal, so it had to be a pretty good race behind me,” the third-starting O’Neal said in victory lane. “It was a good race for the lead.”

The seventh-starting Sheppard, who struggled with what he called “gremlins” during the main event, finished 0.809 of a second behind O’Neal at the checkers followed by Marlar’s body-damaged car, Gustin and 16th-starting Tyler Erb of New Waverly, Texas.

Erb put himself into position for the main event with a heat race victory, after which he discussed his lackluster season.

“We’ve struggled,” he said while sitting behind the wheel in the infield. “I don’t think that’s any secret. We just haven’t been ourselves. We’ve struggled just trying to get back to where we were last year.”

In stalking Gustin and sliding into the lead on the 31st lap, O’Neal took a step toward getting back to the Tennessee-based team’s level of an impressive 11 victories last season, including an unprecedented sweep of the Show-Me 100 and Topless 100.

"I'm just so, so, so, so happy for all my guys. We've all worked so hard and (crewman) Trevor Crittenden couldn’t be here tonight, and I hate it man. I know he's probably pumped up sitting at home Washington. I wish you were here buddy. But I just can't think Trevor, Eric, Mason, my girlfriend Tessa, or Roger Sellers car owner, Tom Buckingham, just everybody pitches in on this thing,” said O'Neal, who was coming off a pair of third-place weekend finishes in Illinois on the MARS Racing Series. “It’s been pretty awesome just to see the progression. We've just been inching our way. Unfortunately we haven't just made a huge stride to get that much better, but we've just been inching our way. So I'm so, so happy and proud of this team.

“We're really really good right now and arguably the best I've been. You know, we've been able to qualify good, which is something I've struggled at. So, you know, we'll just try and keep the ball rolling. It's hard to stay on top of these racetracks every night and to make the right decisions and especially tonight, we were a little tight and it was just hard to make the right decision.”

After O’Neal took the lead, he had a couple of tense moments on the cushion, slipping up with 15 laps remaining and allowing Gustin to pull alongside on the backstretch. After edging back away, O’Neal also had a near slipup with two laps remaining but held on for the victory.

"I was having a hard time hitting (the cushion) down here. It was so thin around that top probably, just a foot — if a foot — up there left. I spent most of the time through the middle and then Gustin moved down and I knew I had to get up there to pass him,” O’Neal said. “Man, this car was just awesome all night long. You know being able to qualify good from a deep position like we did and capitalize on starting up front. I knew just running around there pacing them first 20 laps, I knew I had a good race car. I was just trying to keep the tires underneath me for a while.”

Sheppard said he didn’t want to make excuses, but he was fighting issues that didn’t quite allow his Rocket Chassis house car to be at its best.

"We were fighting a few gremlins there in the heat race, and in the feature there. I think, if we could’ve had our stuff running there … I was stopped in the middle of (turns) three and four a couple of times there, so it was definitely a crazy race,” he said. “I was a little bit leery to drive in too hard, because (the engine) would almost die in the middle of the corner. But once it started to slicken off, (the problems) started to go away a little bit and then I could start maneuvering around a little bit and trying to pass some cars. Man, we had a really maneuverable race car again tonight. It was just a heck of a night for me and the team and congratulations to Hud. That was a heck of a race, a really fun racetrack. Hopefully get to come back soon.”

Marlar never led a lap despite starting on the pole and managed to salvage a third-place finish.

"I kind of beat myself on the tire. I don't have an actual tire guy who picks ‘em — I have to pick them and I don't want to pick them,” he said. “So I picked the tire tonight, and these guys were just softer (on tire compound). So I committed to the cushion after I seen I was kind of too hard on tire, and then tore the quarter(panel) off, so that definitely didn't help.”

A red-flag appeared on the ninth lap when sixth-running Ricky Thornton Jr. slipped over the turn-two banking, his car slowing rolling over the banking. The car was upside down when he climbed out, but the Chandler, Ariz., driver wasn’t injured.

The only other slowdown came on the second lap when Chad Simpson collected fellow home-state driver Spencer Diercks in turn two.

Notes: After his fourth-place finish, Marshalltown’s Ryan Gustin quickly loaded up to head to Pennsyvlania for the three-race World of Outlaws Case Late Model Series weekend. The first race is more than 900 miles and a time zone away in Bloomsburg, Pa. … Todd Cooney's night ended early when he got the worst of a second-heat race tangle. ... Tyler Bruening was also an early retiree in that heat race but returned for the consolation race. … Devin Moran rebounded from a flat tire in his heat race to win the B-main. … Mike Marlar's quick time lowered the Super Late Model track record. ... Jason Utter of Columbus Junction, Iowa, won the KMJ Performance Miller Lite 50 sanctioned by the Corn Belt Clash series at Marshalltown in 2013, the previous Super Late Model event at the track. ... Modified ace Jeff "Bone" Larson entered in a Jeff Curless-owned Late Model but failed to crack the feature lineup. ... Spencer Hughes of Meridian, Miss., had a tough trip to Iowa when his team's hauler struck a deer and required a new radiator to continue the trip.