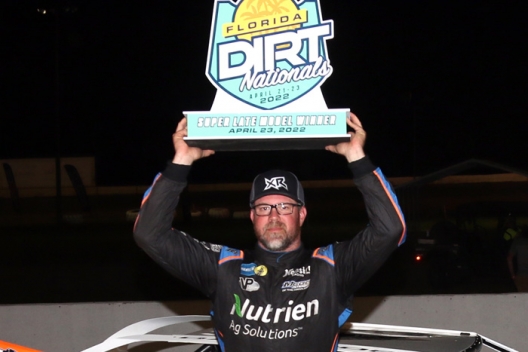 ELLISVILLE, Fla. — In the midst of a five-month winless stretch, Jonathan Davenport was struggling to get a handle on the 4/10-mile All-Tech Raceway oval during Saturday's Florida Dirt Nationals on the XR Super Series. A sudden brainstorm about a long-ago race helped him formulate a new strategy.

"About a quarter way through that race," the 38-year-old Blairsville, Ga., driver said, "I got to thinking a different way to drive this place, because what I was doing wasn’t working. They was catching me; I just couldn’t get comfortable.

"And I remember dad taking me back to a gokart track in Pigeon Forge, Tenn., and this thing was like super-slick. And I just started trying to drift through the corners. I don't know why, but it just reminded me of that. So I remember me and dad had a whole lot of fun at night."

Davenport ended up having a whole lot of fun — and earning a whole lot of money — by leading flag-to-flag at All-Tech for his first feature victory since November 2021. In pulling away to take the checkers by more than three seconds ahead of runner-up Kyle Strickler, Davenport pocketed a $50,000 paycheck while leading every lap of the main event from outside the front row.

When he climbed atop his Double L Motorsports Longhorn Chassis to celebrate the richest Dirt Late Model payday in Sunshine State history, a single word was on his lips: "Finally."

Davenport ran mostly unchallenged in taking the checkers over Strickler, the Mooresville, N.C., driver who notched his second runner-up finish in as many nights. Brandon Overton of Evans, Ga., held the second spot the first 14 laps before ceding the position to Strickler while ninth-starting Ashton Winger of Hampton, Ga., and 17th-starting Shane Clanton of Zebulon, Ga., rounded out the top five.

Friday's $25,000 winner Tim McCreadie of Watertown, N.Y., was running sixth when he spun into the infield, then pulled back onto the track to draw a yellow flag. He restarted on the tail and finished eighth.

Davenport, a three-time Lucas Oil Late Model Dirt Series champion, is running XR Super Series events as part of an independent schedule in 2022, but things haven't been as smooth or successful as the Lance Landers-backed team might've hoped.

"I feel like I'm on top of the world really. I’m just happy for my guys," Davenport said in victory lane. "I’ve put them through a lot this year. You know, we’ve tried not to race as much so these guys would be more energetic, you know, be full of life before we get to the racetrack, and all I do is tear (stuff) up. So we're gonna try to quit doing that. Maybe the bad luck’s gone. We've had a lot of bad luck this year. Just little things here and there. It's hard to hard to see from the stands or from the couch, but we've had good cars.”

Davenport's first victory of 2022 — he tallied 26 victories last season — will allow the team to celebrate, at least briefly.

"Finally, we don't have to eat Spam sandwiches no more," Davenport cracked. "We can go home and eat us a steak and we're gonna be on the road. We got to be at Eldora (Speedway in Rossburg, Ohio) on Tuesday, one place that I definitely love. This place is so frustrating, but it's definitely rewarding when you can run good here.”

Strickler couldn't keep up with Davenport but had a race-long battle with Overton for the second spot. He'd like to have grabbed the checkered flag, but the $25,000 payout to the runner-up made it a good night, saying "that's awesome for us and for for a race like this. If we keep putting ourselves in position, I promise what will the wins will start coming.

"I couldn't steer through the center there, so my only saving grace was to blast it in (the corner) as hard as I could and tried to slide to some traction. I'm sure I was holding Brandon up a little bit. It's just, I made $25,000 for second and you never know what could happen. So it was good. I knew the top would be more consistent, but at the end of the day, I'm so proud of my guys and everybody has helped me out on this deal.”

Overton bemoaned his choice of tires Friday that cost him during long green-flag runs, then again on Saturday when the many starts and stops of the caution-plagued race didn't fit his tire choice either.

“I ain’t making no excuses. Hell, that's what what it takes to win races: you got to do the right things. J.D. needed one. He’s been right there, he just hadn’t gotten him a win yet," said Overton, who struggled to find a rhythm.

“You get rolling there and you know what you're doing, and then it's like we have a restart and if you don't (restart) good and you get all bunched up and you just can't get your angles right (and) you're scared to open up because you’re scared somebody’s going to slide you," he continued. "You just gotta get you some distance and get a rhythm. I could get it rolling. I just had to keep staying pinched (in the corners) and just didn't have enough, wasn't good enough. Well work on it and be better.”

Several single-car cautions slowed the action, including a turn-two spin for NASCAR Cup Series champion Kyle Larson on the 12th lap. Larson rallied back to seventh but slowed on the final lap due to a broken driveshaft and suspension part and finished 17th.

Notes: Davenport won his first Super Late Model feature since Nov. 12, 2021, an XR victory at Las Vegas (Nev.) Motor Speedway. … Polesitter Ricky Weiss dropped out of the top five on the 11th lap, continued fading and retired on the 22nd lap; he said he picked the wrong tire. … Georgia drivers filled four of the top five spots (only runner-up Kyle Strickler was non-Georgian) ... Ricky Thornton Jr. of Chandler, Ariz., rallied from 19th and into contention for a top-five finish, but he hit the turn-two wall on the 25th lap and wasn't as fast thereafter, retiring on lap 42. ... The race was the richest Dirt Late Model event in Florida since 2005 when Scott Bloomquist earned $30,000 in the World of Outlaws Case Late Model Series finale at Volusia Speedway Park in Barberville, Fla.