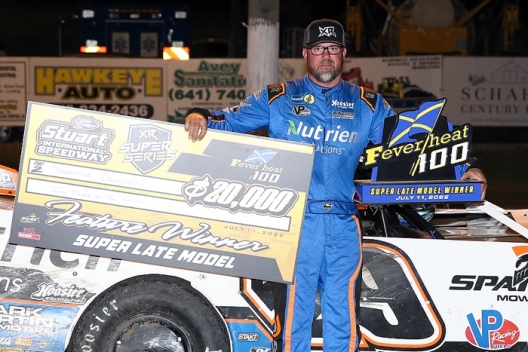 STUART, Iowa — Polesitter Jonathan Davenport didn’t have much to worry about in winning Monday’s 50-lap XR Super Series event at Stuart International Speedway. Well, except for when he slammed into the turn-two wall.

Fortunately for the Blairsville, Ga., driver, his Double L Motorsports Longhorn Chassis was no worse for the wear after the strange lap-16 incident caused by a competitor's blown radiator hose that left moisture on the surface. Restarting out front, he cruised the rest of the way for a $20,000 victory, his third of the season on the first-year tour.

“I think it's fine. It might’ve bent a wheel, maybe but I'm not sure. It hit it pretty good. But luckily there was a lot of dirt built up against the wall, so that definitely cushioned the blow,” Davenport said. “We took off (after the restart and) I didn’t have no vibrations, so maybe there was just enough dirt there to just save us.”

Davenport led comfortably most of the way and, held up by traffic in the closing laps, took the checkers 0.797 of a second ahead of runner-up Tim McCreadie of Watertown, N.Y., in the first of two events at Stuart, the quarter-mile oval hosting its richest-ever Dirt Late Model events.

Eighth-starting Ryan Gustin of Marshalltown, Iowa, was third followed by Mike Marlar of Winfield, Tenn., and Chad Simpson of Mount Vernon, Iowa, who held the second spot for 32 laps but slipped out of the runner-up position on lap 46 and faded to fifth with a softer-tire choice than most competitors.

Davenport’s run was mostly uneventful except for as the leader was preparing to overtake the slower car of Daulton Wilson. As the cars went through turns one, Wilson suddenly slid high and into the concrete barriers, when Davenport doing the same thing just behind him.

While the cars of Wilson and Davenport didn’t make contact, both tagged the wall after running through an apparent strip of moisture around turns one and two. Davenport wondered if Wilson’s car blew a radiator hose — the Rattliff Motorsports team confirmed it did.

“I was trying to pass (a lapped car) on the outside and I followed Daulton Wilson up to the top there,” Davenport said. “That’s when he blows (water on the track) because he hit the wall and I've done the exact same thing.”

During the ensuring caution period for Wilson’s retirement, Davenport gassed up his car to look for signs of damage, but didn’t find any. He was relieved when the race went back to green and he didn’t feel any vibrations as he continued his dominating performance.

His only concern late was the lapped traffic as he approached the slower cars of Jason Feger and Brent Larson in the closing laps.

"I was looking at the scoreboard and just hoping it'd get over whole a lot faster,” Davenport said. “I was a little bit worried because everybody got in line there on the bottom and then the two cars in a back was running side by side. I was a little better moving out a lane. I thought I could get by Jason like that, but then Brent was out there and he would go then he would come back. So I was just trying to protect both lanes there.”

He held on for the victory, but added that it probably “wasn’t the best race to watch for ya'll fans, from where I was sitting at anyway, but it was sorta good for us.”

McCreadie started fourth but slipped back and was running seventh past the halfway point. He turned things around in the second half of the race with his car performing better on a drier surface after a half-hour track prep session sent the 24-car field on a hooked-up surface for the start. (Davenport turned laps at 12.6 seconds in the first 10 laps but was slowed to 14.9 seconds in the final 10 laps).

“It's just with all the with all the (track) prep, the inside lane was just way fast for a long time and I just had a bunch of restarts on the top,” McCreadie said. “I finally got one on the bottom, which got me back near the front of the field and I just rolled the middle because it finally threw some moisture there.

“I just think we wasted 20 laps at the beginning. Maybe they need to make it a 100-lapper or something. But we need to have it prepped before we race on it for another division to run on it first, I feel like, that way the track's race ready instead of us trying to burn it off all night long.”

The third-finishing Gustin also struggled early, failing to make up any ground from his eighth starting spot until late. He went to fourth from sixth on lap 45, then climbed another spot with four laps remaining.

“I wasn't really trying to conserve there early,” Gustin said. “We put a small carburetor on I think that kind of bit us in the butt early. It seemed like once the track blew off were were good, so we won't make that mistake again tomorrow.”

Besides the caution for Wilson’s departure, the 50-lapper was slowed by two other cautions. On the sixth lap, unrelated Tyler Erb and Dennis Erb Jr. got tangled up in a mess between turns three and four with Chase Junghans while Kyle Bronson slowed on the 27th lap for the final slowdown.