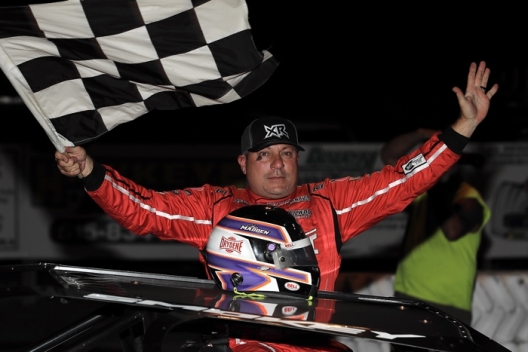 STUART, Iowa — Bobby Pierce made a dazzling third-to-first backstretch move to take the lead on the 15th lap Tuesday at Stuart International Speedway, but Chris Madden’s answer to that maneuver a dozen laps later proved to be the winner.

The Gray Court, S.C., driver led laps 27-50 at the quarter-mile oval for a $20,000 payday and his tour-leading fifth XR Super Series victory of the season as he discovered the winning low groove before anyone else in the second of two weeknight Stuart events.

"The racetrack was was actually perfect at that time” when early leader Jimmy Owens, Pierce and Madden swapped the lead. “We were three-wide, four-wide …. you can't ask for anything better. It did rubber up at the end and we had the lead by then, so it worked out in our favor.”

With virtually every driver settling into the hub over the last 20 laps, Madden took the checkers 0.407 of a second ahead of Oakwood, Ill.’s Pierce. Monday’s winner Jonathan Davenport of Blairsville, Ga., survived right-front corner damage to finish third while Newport, Tenn.’s Owens, who led the first 14 laps from his pole position, was fourth ahead of fellow Volunteer State racer Mike Marlar of Winfield, Tenn.

Owens led from the outset as Pierce, Madden and Davenport gave chase with the frontrunners forming a tight pack up front after a dozen laps. Pierce took a stab at Owens, but, when he got too high in turns one and two on the 15th lap, Madden slipped underneath and pulled nearly alongside Owens.

Undeterred, Pierce raced to the low groove and beat both drivers into turn three to take command. Madden slipped back to fourth, took third from Owens on the 21st lap and grabbed second from Davenport a lap later.

On lap 27, Pierce was on the high side in turns three and four trying to get around a slower car when Madden zoomed underneath both cars to take a lead he’d never give up.

“We’ve got a really good package right now. Definitely when (the track surface) gets clean, we've definitely got a really good car,” Madden said. “I just can't thank you know the Lord enough for blessing me. We've been super-blessed this year and it's just amazing.”

Pierce missed messages from crew members in the infield to swap grooves past the halfway point.

“I just needed to move down you know? I missed the signal there. It happens,” he said. “From yesterday to today, the car was really good. I mean, we were good yesterday, too. I finally found some at the end, but we finally started up front tonight, which is what we wanted. We’re happy with second place. Congrats to Chris on the win.”

Detailing his “crazy” moves on the 15th lap, Pierce said the battle “was pretty exciting. I didn't know if it was going to work, but I figured I had to go for it, because by the time I turned, Chris had filled the gap and I had to make something happen. It was awesome right there, but I wish we could have hung on to it.”

Despite being in control early, Owens was shuffled out of the mix by the halfway point.

On the frontstretch following the race, Davenport and his crew examined plastic molding over the right-front wheel damaged in a scrape with Pierce.

“Once it took rubber there and Madden got the lead, I guess Bobby figured out it was rubbered down there and he was trying to pass the lapped car on top. (Pierce) come off the cushion down to the bottom,” Davenport said. “He didn't see I was down there, but he ripped our (flopper) off there. Luckily it went under the frame rail instead of the tire, but we were kind of just hanging on from there. I couldn't steer very well, but it didn't matter anyway.

“Man, this (track) raced great for about 15 laps there, it seemed like, or 20 or however long it was. We had a hell of a show. I didn't think it would take rubber that fast, but it did, and Madden found it first, and he won.”