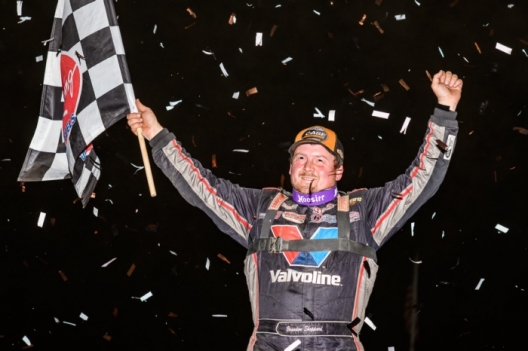 ALMA, Ohio — Brandon Sheppard stated some simple goals for Saturday night’s 50-lap World of Outlaws Case Late Model Series feature at Atomic Speedway when he stepped in front of the crowd to draw his starting position.

“Hopefully we can keep some speed going here,” he said, “and hopefully pass the droop rule (inspection) afterwards.”

Sheppard, 29, of New Berlin, Ill., cracked a sly smile as he turned away, for it was his Rocket Chassis house car’s failure of WoO officials’ droop check — the measurement of a machine’s rear deck height — that disqualified him from a runner-up finish in Friday’s 40-lap opener at the 3/8-mile oval. Neither B-Shepp nor his team owner, Mark Richards, was about to suffer the same fate again.

And they didn’t. After Sheppard grabbed the lead from Max Blair of Centerville, Pa., on lap 17 and turned back a late challenge from Dennis Erb Jr. of Carpentersville, Ill., to secure Saturday’s $15,000 triumph, his familiar blue No. 1 made it through technical inspection with flying colors.

Erb nosed underneath Sheppard several times in the closing laps but settled for second place, 0.675 of a second behind the victor. The ninth-starting Blair finished third after leading laps 13-16 while Gordy Gundaker of St. Charles, Mo. – like Blair a WoO rookie — recorded a career-best series finish of fourth and Moran, who led laps 2-12, completed the top five.

WoO rookie Kyle Hammer of Clinton, Ill., who started from the outside pole and paced lap one as the first of the race’s four different leaders, faded to 10th in the final rundown.

The checkered flag was important in other ways for Sheppard, who had six wins on his ledger by the end of February but none under the WoO banner. Saturday marked his first of 2022 on the national tour and the 78th of his career, tying him with Josh Richards atop the circuit’s all-time win list.

“I would’ve liked to hope (to someday become the all-time winningest WoO driver), but you just never know,” said Sheppard, the four-time and defending WoO champion. “When I started my dad and my grandpa gave me everything I needed to get going, and I’m just thankful for them and for Mark Richards for picking me up back in 2012.”

Sheppard was in classic form in Atomic’s finale. When he restarted third to the outside of Moran on lap 15, he glided past both Moran and Blair in a span of two circuits to assume command for good.

“Thanks to Devin too for picking the bottom on that one restart when I took the lead because I didn’t know how good I was on the bottom and I just wanted to keep my line (running the top),” Sheppard related. “I was hoping that in clean air I could get by Max there and he ran me really clean.”

Sheppard built an edge of some 10 car lengths during the race’s middle stages, but his cushion over Blair and Erb began to shrink as he reached slower traffic and the 10-to-go mark approached. Erb overtook Blair for second on lap 41 and five circuits later was on Sheppard hard for the lead.

“I think I burnt my tires up there pretty early in the race trying to get the lead, and then it was cleaning up and starting to take a little rubber getting in over there (turn three) and I think I was using that a little too much,” Sheppard said. “That slowed me down a bunch in one and two and I couldn’t really do anything with Josh (Richards) when I got to him (to lap the other four-time WoO champion). I was kind of stumped out there, I didn’t know which way to go.

“And then Dennis started showing me a nose and I was trying to change what I was doing, but Dennis always races me clean so thanks for that.”

Erb, 49, drove inside of Sheppard through turns one and two on lap 47 and actually pulled ahead off the second corner, but a caution flag flew for Friday feature winner Tyler Erb’s flat right-rear tire before another circuit could be completed. The slowdown was a godsend for Sheppard, who maintained his momentum on the outside of the track following the restart to keep Erb’s inside bids at bay.

“I was happy to see the caution for sure because (Erb) pretty much had me passed before that,” Sheppard said.

The caution flag didn’t sit as well with Erb, who appeared primed to complete an advance from the 12th starting spot to his second WoO victory of the season.

“Our car was working real good there while we were under green,” said Erb, who left Atomic leading the WoO standings by 44 points over Blair and 66 points over Sheppard. “I didn’t really want to see that caution there at the end, but them guys (Sheppard), their car was good too. We fired off real good (on the restart) and we gave it a shot over there but it wasn’t good enough.

“It’s real good to keep things rolling,” he added. “Things have been running good, running consistent, and that’s what we need to do.”

The 32-year-old Blair flirted with his second WoO triumph of 2022 before settling for a third-place finish to cap his first-ever trip to Atomic.

“If it was a 20-lap race, I think we had a car maybe we could’ve won with,” Blair said. “But once the bottom kind of started to give out a little bit and I had to move up I was just a little too tight to roll the center as good as Brandon could.

“I’ll take it. We started ninth, qualified deep again (in time trials), and we worked ourselves out of that hole and drove from ninth to the lead for a couple laps. To go toe-to-toe two of the absolute best in the sports, I’ll take that all day.”

Three caution flags slowed the race. Prior to Tyler Erb’s tire trouble on lap 47, Dave Hess Jr. and Josh Richards tangled in turns three and four on lap 15 and Boom Briggs slowed on the homestretch on lap 17.

Notes: Sheppard had high praise for Atomic’s racing surface on Saturday. ”The track was awesome,” he said. “The promoters got the track really good for us, and it’s been good all year so I’m definitely excited to come back here soon.” … Rocket Chassis swept the podium positions both nights of the Atomic weekend. … Josh Rice and Hudson O’Neal ran among the top five at points in the feature before settling for finishes of seventh and ninth, respectively. … Former WoO regular Chub Frank entered both nights of competition in one of his cousin Boom Briggs’s team cars. He finished 15th on Friday but failed to qualify for Saturday’s finale. … A big crowd turned out on a warm spring day that saw the high temperature reach into the 80s.