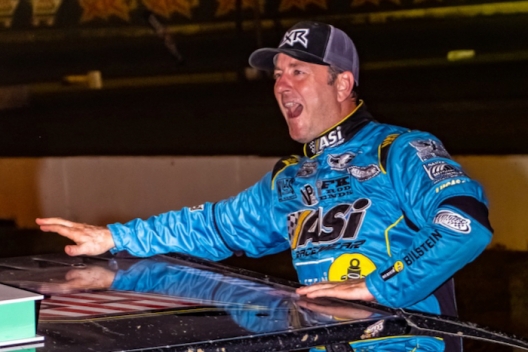 ELLISVILLE, Fla. — Typically, Brandon Overton is the patiently-waiting driver content to stalk his prey before pouncing for a late victory. When Overton squeezed past race-long leader Kyle Bronson on lap 24 of Friday’s 40-lap Florida Dirt Nationals at All-Tech Raceway, Overton was in perfect position for big another big XR Super Series payday.

Little did he realize — until it was too late — he was the hunted, not the hunter. Overton, of Evans, Ga., hadn’t even gotten comfortable circling All-Tech’s big half-mile from the front of the pack when he fell prey to Watertown, N.Y.’s Tim McCreadie. Rallying from the 10th starting position, McCreadie overtook Overton with an outside pass on lap 28 and pulled away for a $25,000 victory, his first with the upstart XR Super Series tour.

Kyle Strickler of Mooresville, N.C., charged from fifth to second in the final 10 laps following the feature’s lone caution, while Bronson, of Brandon, Fla., used the lap-30 restart to take third from Overton as well. Bronson led laps 1-23 after starting outside the front row alongside Overton. Overton, who led only four laps after grabbing the lead from Bronson in turn three, settled for fourth, while eighth-starting Jonathan Davenport of Blairsville, Ga., completed the top five.

The victory — McCreadie’s second of the season and his 11th top-five finish — came after the reigning Lucas Oil Late Model Dirt Series champion struggled in Thursday’s open practice session. McCreadie said he and his team struggled to the point that they were forced to park the car they had hoped to run in favor of the team’s more tried and true chassis.

“These guys on this Paylor Motorsports team, there's zero quit. Last night went as bad as it could go,” said McCreadie. “We had just parts from manufacturers that just didn't work, that just came apart. So we got no (practice) time on the track and we pulled out the car that we always run and here we are. Man this is on the (team). Them guys, like I said, no matter how I get — because I'm not easy to deal with when we’re not running good — and they definitely work their tails off, no matter how I am and that's a professional, number one race team.”

Bronson used his momentum from his outside starting spot to grab the lead from Overton on the opening lap but despite a lack of cautions, he still couldn’t put enough distance between himself and the Georgian, who stuck to the bottom groove especially in turn three and the exit of turn four, where he was able to make up a lot of ground.

Slowly closing back in on Bronson, Overton got a good run down the backstretch and dove to the inside entering turn three to get the lead, a move Bronson took issue with.

“I had a pretty good car there and I missed the bottom one time, did a bad job there and Brandon got in there and knocked the left front off,” said Bronson. “That’s the way it goes, sometimes, you know. This is a brand new car, first night on it. We’ve been doing a little testing back at home and really getting (the car) to my liking again. This droop rule had us kind of messed up a little bit, but I think we're heading in the right direction.”

With Overton out front, Bronson eventually gave way to McCreadie, who marched forward from 10th, catching Overton on lap 26. A lap later the two were even before McCreadie wrestled the lead away with his unlikely outside pass with a dozen laps left.

If he had any complaints at all, McCreadie said he’d like to get moving a little sooner, a problem that perhaps starting closer to the front would cure.

“I hate the fact that we don't seem to have a lot of speed early, but the money, you know, the money comes at the end,” said McCreadie. “It would be a lot better for us to know what we're doing maybe and start up front, but if you can keep this track racey, like Wendell had it, it’s a … this is how I remember this place. I got lapped here (in 2021) when it was like this, so we went to work. The whole crew went to work for this, this Paylor Motorsports team and this Longhorn Chassis, Cornett Power, Bilstein Shocks. It's a great night man.

“(The car was) very maneuverable. I'm a little snug where I want to be snug. I hope everybody liked it because it was a lot of fun out there.”

The race was slowed by just one caution, the result of a spin by Headingly, Manitoba’s Ricky Weiss on lap 30. Strickler, who was fifth at the time, took advantage of the yellow flag to pass Davenport, Bronson and Overton on the restart.

“I just gained on him and gained on him and then I blasted in hard enough to finally get into the fence down there. Then I wanted to make sure I just got a good finish because we've been working our butts off, and it feels great to get a top three for sure.”