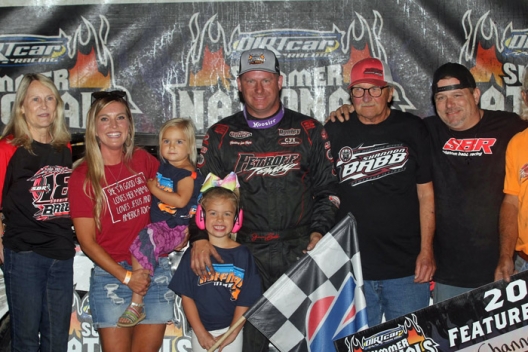 The 47-year-old Moweaqua, Ill., driver's good feeling turned to reality as he overtook race-long leader McKay Wenger on the 24th of 40 laps and grabbed his 100th career victory on the long-running series where he's a four-time champion.

"I kind of a had a feeling this might happen tonight," Babb said in victory lane.

Not only did the $10,000 victory give him a mindboggling triple-figure victory total on the Bob Memmer-founded series, it knotted him atop the tour's all-time victories list with his longtime racing buddy, Hall of Famer Billy Moyer of Batesville, Ark.

Babb took the checkers 1.704 seconds ahead of the pole-starting Wenger, who had his hands full in a mid-race battle with Babb, outside front-row starter Garrett Alberson and Brian Shirley in a throw-a-blanket-over-'em showdown.

Babb emerged just past the halfway point with an inside pass of Wenger of turn four and led the rest of the way at the quarter-mile oval where Babb twice before won on the Midwest tour — but not since 2004.

Wenger had a shot at not only denying Babb his milestone victory but capturing his first career Summer Nationals feature. But the Fairbury, Ill., driver misjudged how soon a traction strip was developing in the low groove in turns three and four.

"I knew it was coming, but I knew until the rubber (strip) came I was going to have to run the cushion down there," he said. "That's why I didn't really want to be leading that whole deal. I'd go down there to see if it was latching up yet or not, and it wasn't. And then (Babb) was probably experimenting there whole lot, and finally when it latched up, he hit it.

"I got down there a couple of laps two late. I thought I needed to protect the bottom and run through the moisture in (turns) one and two and I should've just moved up and rolled the middle," Wenger added. "Even at the end, I still think we were better than him in (turns) three and four, but I was just horrible in one and two. I just couldn't get on the gas off of (turn) two and on the backstretch really."

Alberson, of Las Cruces, N.M., ran second the first 19 laps but settled for third while Chatham, Ill.'s Shirley was fourth. Joe Godsey of Edinburgh, Ind., rounded out the top five for his best series run. Series points leader Bobby Pierce of Oakwood, Ill., had to take a provisional after suffering mechanical problems in time trials and ended up 13th, his worst finish on the tour as he ended a two-race winning streak.

"It means a lot. I've got a ton of respect for everybody that did this before me, Moyer and (Don) O'Neal, (Rick) Aukland, just all them guys I raced with," Babb said. "Man, they showed me the ropes, and now I've got these kids behind me or beating me every night. I know how they feel, it just keeps getting tougher and tougher. I always loved Farmer City. They always have a great race here, and it's been an awesome place."

Thanking his family, sponsors and crew members, he realizes that competing on the series doesn't come as easy as it did during his best seasons, including 2005 when he tallied a series-record 15 victories.

"(Crew chief) Pat (Dempsey) beats the body out on this thing every day. It's just been me and him lately. I told him I don't know how we used to do this," Babb said. "Two or three days of this starts to get a little wearing on me a little bit. But anyhow, I'm glad to have my family here tonight. My mom and dad, my wife Emalie and my two little girls and all my friends and family are here. It's an awesome deal."

Notes: Babb has won dozens of races at Farmer City, but it's just his third in Summer Nationals action. His previous victories came in 2002 and 2004. ... Officials went into hurry-up mode with weather approaching and cut the race to 40 from 50 laps. ... Farmer City hosted the series for the 31st time. ... Fifteen of 22 starters finished on the lead lap.

With rain beginning to draw close to Farmer City, officials gave starters for the 50-lap feature the eight-minute call to line up immediately after the B-main ended at 8:48 p.m. CT. … McKay Wenger won the first heat and drew the pole position for the 50-lap feature. The Farmer City regular has won the last three weekly features at the track. … Garrett Alberson drew the outside pole, putting him on the front row of a Summer Nationals A-main for the second time in three days. He was the polesitter for Wednesday’s headliner at Spoon River Speedway. … Riding a two-race win streak into Farmer City’s action, Bobby Pierce had his night get off to a rough start with a broken driveshaft on his second qualifying lap. While he was still second-fastest in his group, he was disqualified because he didn’t scale and had to start at the rear of the first heat after making repairs; he climbed to a sixth-place finish and then opted to use a provisional, giving him the 19th starting spot for the feature. … Ashton Winger was the fastest qualifier in the second group but spun off turn two on the first lap of the third heat. He fortunately was only grazed by one passing car, but the nose damage forced him to retire to the pits. He's starting the feature thanks to a provisional. … Joe Godsey enjoyed one of his best qualifying efforts of the Summer Nationals as he powered underneath both Tanner English and Winger to grab the lead in Heat 3 and went on to win the prelim. … Jordan Bauer and Kolby Vandenbergh tangled and spun in tandem across the finish line while battling for the fourth and final transfer spot in the fourth heat. Bauer ended up over the turn-one bank was was credited with the fourth-place finish. … Rob Mayea of Bend, Ore., joined the Summer Nationals at Farmer City to begin a stretch of action in the Midwest. He didn’t qualify.