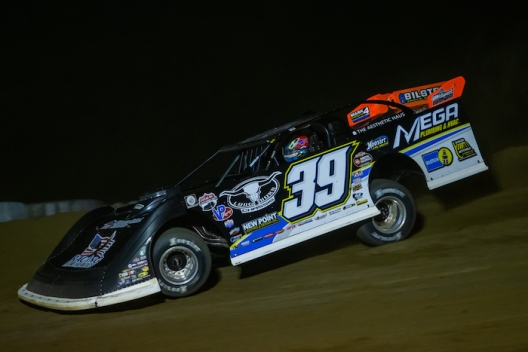 ZANESVILLE, Ohio (July 3) — Throughout his career Tim McCreadie has seen so many post-race firework shows at Fourth of July weekend races, that he rarely hangs around long enough to watch them anymore. But after capping the Lucas Oil Late Model Dirt Series holiday weekend doubleheader with a dominating performance in Saturday’s Prime Solutions 50 at Muskingum County Speedway, an elated McCreadie was in no hurry to skip out on the track’s pyrotechnics display.

“It’ll be the first time I watch all the fireworks,” McCreadie told the large Muskingum County crowed during his victory lane interview. “Normally I’m trying to get out of here, but we’re going to hang around and watch them tonight.”

Indeed, Independence Day celebrations will be a little more enjoyable this year for the veteran racer from Watertown, N.Y., thanks to his impressive performance in Saturday’s race. Starting from the outside pole, McCreadie grabbed the lead on the start and ran virtually unchallenged on his way to earning $15,000 for his third Lucas Oil Series victory of the season.

After a late caution bunched the field, McCreadie’s Paylor Motorsports Longhorn Chassis pulled away through the final seven laps and crossed the finish line 1.618 seconds ahead of runner-up Kyle Bronson of Brandon, Fla., who started third and ran among the top three most of the way. Polesitter Spencer Hughes of Meridian, Miss., was third with sixth-starting Jonathan Davenport of Blairsville, Ga., and eighth-starting Gregg Satterlee of Indiana, Pa., rounding out the top five.

McCreadie’s first series victory at Muskingum County snapped Davenport’s three-race win streak on the tour and helped swing some momentum back in McCreadie’s direction in the Lucas Oil points chase. McCreadie entered the event with 120-point advantage over Davenport, who took second in the standings from Hudson O’Neal on Saturday, but he’s watched Davenport close the gap all season after a rough start to the year left the three-time series champion mired in 14th following Speedweeks.

After not feeling completely pleased with his heat race run, and with the memory of losing the lead to Davenport during Friday’s feature at Portsmouth Raceway Park fresh in his mind, McCreadie and crew chief Philip Snellen, called Longhorn Chassis guru Kevin Rumley for some technical advice before Saturday’s feature. It proved to be the right move.

“I told Phil, ‘I just can’t figure this right-rear shock out,’ “ McCreadie said. “Phil’s like, “Why don’t we just see what Kevin’s doing?’ We called Kevin up like we’ve done before, and he’s called us up when he’s on the road with (Kyle) Larson. Same thing with J.D., we all bounce ideas. It was the right one tonight. As bad as it felt last night, we were able to get a good run tonight. This thing felt amazing.”

With his runner-up finish, Bronson is left still chasing his first Super Late Model victory since January, but after scoring his second straight runner-up finish and his fifth top-five in the past seven series races, Bronson is confident a victory is coming soon.

“As long as we can keep running consistent, I think the wins will come,” said Bronson, whose most recent of his four career Lucas Oil Series victories came on May 20, 2020. “But it’s really awesome to come here and race in front of so many fans here. (Track owner) Donnie Moran busts his butt on this track to make sure we got a really good racetrack. I really appreciate the Morans giving us a place to race.”

“We had a good two nights of racing and was able to write down a lot of stuff in our notebook,” said the 20-year-old Hughes. “I just can’t thank Craig Sims enough. He’s the one who makes it possible for us to run up and down the road.”

The race was slowed by five cautions. The most notable caution was the final one on lap 43, which appeared when defending series champion Jimmy Owens of Newport, Tenn., slowed from the second position after his throttle linkage came loose.

Notes: McCreadie earned the 25th Lucas Oil Series victory of his career, moving him ahead of Billy Moyer for seventh on the tour’s all-time wins list. … Mike Marlar had engine issues in Saturday’s preliminary action and was forced to use a points provisional to start from the 23rd position; he ended up 18th at the finish. … Josh Richards of Shinnston, W.Va., gave up a top-10 spot when he pitted under a mid-race caution; he recovered to finish 12th. … Before Saturday’s action, the series announced that next season’s Fourth of July weekend visit to Muskingum County will be expanded to two days July 2-3 with three $3,000-to-win semifeatures on opening night and a whopping $30,000-to-win finale on the second night.