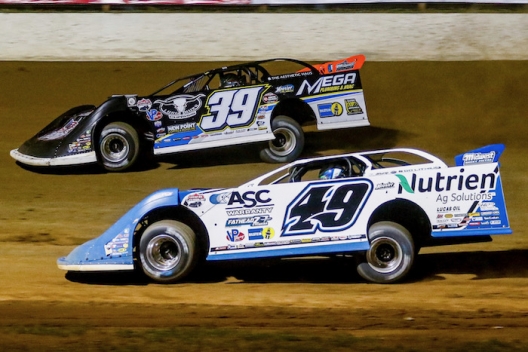 The fourth-starting Davenport of Blairsville, Ga., rocketed to second early in the 50-lap race and pressured polesitter Tim McCreadie of Watertown, N.Y., through the opening laps before using a lap-nine slidejob to take the lead. A close call while completing the pass on McCreadie was the only serious obstacle Davenport faced during the event as he dominated the remaining 41 laps to score his fifth Lucas Oil Series victory of the season and the 55th of his career.

“I got beside McCreadie there, and I knew if I didn’t go ahead and get by him, he’s such a smart racer, he was going to move down into the line and it was going to be hard to get by him,” Davenport said of his move to overtake the Lucas Oil Series points leader on the racetrack. “I hope I left him enough room because I bottomed out pretty bad when I went to slide him and had to turn it sideways.”

As Davenport pulled away through the remaining distance and eventually won by a comfortable 2.513 seconds, McCreadie was forced to contend with second-starting Kyle Bronson of Brandon, Fla. Taking advantage of a lap-32 restart, Bronson took the second spot from McCreadie and held it to the finish. McCreadie settled for third with sixth-starting Spencer Hughes of Meridian, Miss., fourth and ninth-starting Tyler Erb of New Waverly, Texas, fifth.

While Davenport’s dominating victory may have appeared to be a continuation of his dominating performance the last time the Lucas tour was in action during the June 17-18 Clash at the Mag at Magnolia Motor Speedway in Columbus, Miss., it actually came in a different race car. Davenport debuted a brand new Longhorn Chassis at Magnolia, but he was back in his older Longhorn at Portsmouth.

“We put that new car up,” Davenport said of the newer machine he and his Double L Motorsports team hope to save for higher-paying events coming up later in the season. “But this ol’ car’s been really good too. We beat it to death this year, and we knew these races coming up, they always have character to them, the racetracks do. So we brought this ol’ girl and she run just as good as the new one.”

Along with continue his recent hot streak, Davenport’s third career Lucas Oil Series victory at Portsmouth also continues his recovery from his disastrous start to the season that mired him all the way back in 14th in Lucas Oil Series points when the tour left Florida Speedweeks in early February. After entering the weekend third in series standings behind McCreadie and Hudson O’Neal, who struggled to a 14th-place finish on finish on Friday, Davenport once again made up significant ground in the chase for his fourth series championship.

“We just keep chipping away at,” Davenport said. “We’ve got great race cars and everything’s going our way. Knock on wood we haven’t had no bad luck. As long as we can stay consistent and keep qualifying good and keep our nose clean, maybe we can have a showdown between me and Timmy by the end of the year.”

If the Lucas Oil points chase does indeed come down to the season finale, it will be decided at Portsmouth, which hosts the season-ending Dirt Track World Championship Oct. 15-16.

In addition to hoping he can seal the series title and in doing so complete one of the greatest points comebacks ever in Dirt Late Model racing, Davenport hopes to finally get his first DTWC victory. But as Davenport has learned, winning a 50-lap race at Portsmouth doesn’t mean he’s a favorite to win the 100-lap DTWC.

“We always seem to run good here in the 50-lapper, but the 100-lapper I always struggle,” Davenport said. “I really was struggling there the last 10 laps. I really didn’t know where to be on the racetrack, so I kept moving around. I just didn’t really feel good. I felt good the first 20 to 30 laps then it kind of went away.

“We’ll just go back over this thing once again and look back in our notes. We just keep reading over them over and over and over every time we get here because we really want to come win that $100,000.”

With his runner-up finish, Bronson continued a recent upswing in performance. He now has four top-five finishes in the past seven Lucas Oil Series races.

“We were a little off tonight, but it’s good to be off and still run second,” Bronson said. “The car’s been really, really good here the past couple of months. We’re finally getting a good balance on it. The guys have been working really, really hard and I’m having fun racing again. Davenport and the Longhorn guys have been good the past couple of months, but we’re pretty close here. We just gotta keep putting in the work and I think we’ll be outrunning here pretty soon.”

The race was slowed by five cautions. The first appeared with three laps compete when Brandon Fouts of Kite, Ky., slowed with mechanical problems just after moving into the top five. The second yellow flag waved with 12 laps complete when Shannon Thornsberry of Martin, Ky., and Kody Evans of Camden, Ohio, both had problems.

Shane Clanton of Zebulon, Ga., slowed to a stop and caused the third caution on lap 29, and Earl Pearson Jr. of Jacksonville, Fla., had problems on the restart to bring the caution out again. The fifth caution came when seventh-running Mike Marlar of Winfield, Tenn., slowed after making contact with the wall on lap 32.

Notes: Davenport’s previous Lucas Oil Series victories at Portsmouth came in 2016 and '19. … Seventeen of the race’s 25 starters were running at the finish with 14 on the lead lap. … With 25 entries, the event didn’t feature any consolation races and all entires started the main event.