Information provided by: Series and track reports (last updated May 18, 10:20 am)
Overton rallies late, gets $20,000 payday at VMS
King of the Commonwealth 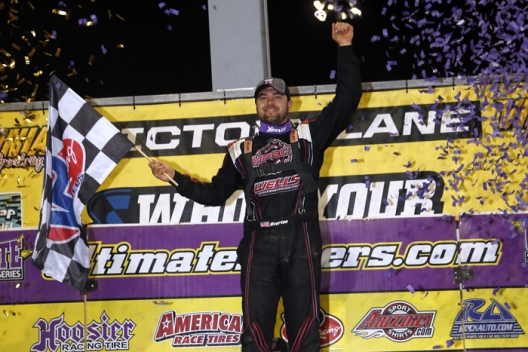 JAMAICA, Va. (May 15) — Slipping from second place to as far back as eighth early in Saturday night’s 60-lap Virginia Is For Racing Lovers King of the Commonwealth feature at Virginia Motor Speedway wasn’t exactly part of Brandon Overton’s plan for victory.

“I told (team members) before I went out there, ‘I’m just gonna take my time. We got a good starting spot,’” said Overton, who took the green flag from the outside pole. “But I fell back a little more than I wanted.”

That wasn’t a dealbreaker, though, for the 30-year-old star from Evans, Ga., who rallied after his early stumbles to capture the half-mile oval’s King of the Commonwealth’s $20,000 top prize for the second time in his career.

Overton, who previously won the Ultimate Southeast Super Late Model Series-sanctioned event in 2017, steered his David Wells-owned Longhorn Race Car past the Ramirez Motorsports XR1 Rocket driven by Jimmy Owens of Newport, Tenn., for the lead on lap 40 and never looked back. The Georgian pulled away from Owens while negotiating lapped traffic over the final 10 circuits to beat the four-time Lucas Oil Late Model Dirt Series champion by 2.947 seconds.

Josh Richards of Shinnston, W.Va., finished third in the Clint Bowyer Racing XR1 Rocket and Tim McCreadie of Watertown, N.Y., was fourth in the Paylor Motorsports Longhorn, giving Lucas Oil Series regulars positions 2-4 in the final rundown. Seventh-starter Gregg Satterlee of Indiana, Pa., reached fifth on lap 36 and stayed there to compete the top five in his family-owned XR1 Rocket.

G.R. Smith of Cornelius, N.C., started from the pole position and led the race’s first 34 laps in his first start with a new J.C. Clary-owned Longhorn car before hid upset bid came to an abrupt halt. A broken heim-end on the machine’s lift bar caused a shift in the rear end that snapped the driveshaft, forcing Smith to the infield and handing the lead to Owens.

Overton’s fall began on lap five when he slid high through turns three and four and tumbled from second to fifth. It grew worse during a string of restart during the A-main’s first third.

“It all started went I went down there (in turns three and four) and about hit the wall and they kind of swarmed me,” Overton said. “Then on one of them restarts (lap 17) … my car was way too tight, like way too tight, at the beginning, and I got behind Jimmy (Owens) and I flew the nose and I panicked and slammed the brakes, it bottomed out and bounced, and I come out like sixth or seventh.”

Overton lost one more spot to find himself in eighth place when a caution flag flew on lap 20. He proceeded to cool his jets for a spell to conserve his equipment for a second-half assault.

“Everybody around me was like trying to go, go, go, so I just kinda migrated myself back there to stay out of s— for a minute,” Overton related. “Them cautions (five between laps 17 and 23) were killing me. I felt like I would’ve been able to pick ‘em off one-by-one if we would’ve just had some laps. I think I passed Satterlee like three times, but the caution would come out and he’d pass me back on the restart.

“I was just being careful on them starts because I know how this place is. If the guy beside you don’t really give a s— he’ll slide in there and hit you in the left front. I didn’t want nobody to hit me … and (the surface) was rough.”

As the race’s halfway mark approached, Overton’s No. 76 began to come alive.

“I did the wrong thing to my car, but it’s not really the wrong thing,” Overton analyzed. “I what I did (with setup) anticipating that I had to be good at the end, but I was not good at the beginning. But whatever … it’s a tradeoff. I felt like it was really good when it had too.”

Overton climbed back into the top five with a lap-22 pass of Satterlee. He took fourth from McCreadie on lap 28 and third from Richards on lap 32. Smith’s retirement moved Overton to second and left Owens squarely in his sights.

“When I was running him down I was like, ‘All right, just be patient, I got him right here,’” Overton said of the moments before he made his decisive move by Owens on lap 40. “I just waited and waited and he started scootin’ getting into three, and hell, I just drove right by him. He didn’t really challenge me much getting into (turn) one because it’s so rough he didn’t even try to go in there with me.

“Then once I got the lead I just kind of did my thing, just kept the the tires on and kept it straight.”

Owens, 49, appeared to be pulling within striking distance of Overton with 10 laps remaining, but Overton had some speed left in reserve to leave his veteran challenger behind.

“One time (his crewman) told me he was on my ass,” said Overton, who registered his ninth overall win of 2021. “I know I had rode for a long time. I said, ‘Hell, I can go.’ I think I went around a couple lapped cars on the top. We had plenty of tire (left) and the car was good.”

Owens, who started sixth and reached second with a pass of Richards on a lap-20 restart, credited Overton with making a fine drive to the checkered flag.

“He was just a little more confident that he could relax, take it easy and ride a little while and be there at the end,” Owens said. “You get back there and cruise around a little bit … you know, it’s a 60-lap race, and he’s probably got as much, or more, experience here than we do, so he just knows what the track will do and we’re out there guessing.

When Overton turned up the wick late in the race, Owens couldn’t respond in kind.

The fourth-starting Richards, 33, held second place twice — laps 2-3 and 5-20 — and threatened Smith early in the race but settled for a third-place finish.

“We fired good on those first few restarts, but then after that I just couldn’t fire as good,” said Richards, whose team made a last-minute decision to enter the event after the weekend’s scheduled Lucas Oil Series shows in Tennessee and Alabama were canceled due to fuel-supply concerns in the Southeast. “In the middle of the race I kind of struggled and moved my driving a little bit and then we got better, but we weren’t gonna go anywhere at that point. Once we fell in line (in third) I just kind of rode it out there.”

Notes: Overton’s victory was his third worth $20,000 at VMS, matching his 2017 King of the Commonwealth and 2019 USA 100 triumphs. … Overton completed a sweep of the Ultimate Southeast’s weekend doubleheader in Virginia, backing up his $5,000 score on Friday at Natural Bridge Speedway and giving him eight career wins on the regional tour. … Ultimate Southeast title hopeful Cla Knight finished 10th after rallying from a lap-19 pit stop during his crew made setup adjustments. … Ross Robinson ran as high as fifth but finished seventh despite finishing the race with damage to his car’s rear deck from a large clod of mud that hit his bodywork. … Trever Feathers was running seventh when a flat left-rear tire forced him to pit on lap 23. He retired nine circuits later due to significant nose damage. ... Ross Bailes’s Billy Hicks-owned No. 79 was sidelined on lap 17 after a broken right-front lower control arm caused him to slap the turn-one wall. … Jamie Lathroum’s car was knocked from further action by a broken left-rear wheel after he absorbed contact in turn four during the lap-20 restart.